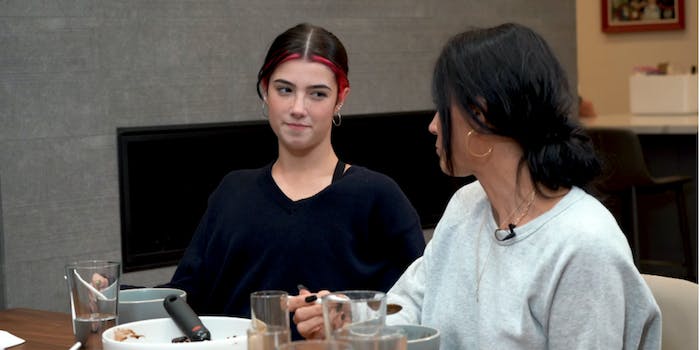 D'Amelio says the video was 'one big misunderstanding.'

This unfollowing is in response to a video on the D’Amelio family YouTube channel, in which Charli, her sister Dixie, and their parents dine with YouTuber James Charles. Charli and Dixie both make faces after being served paella by their private chef Aaron May that includes snails. Later on, Charli laments that a year after hitting 1 million followers on TikTok, she hasn’t hit 100 million yet.

“Was the 95 [million] not enough for you?” Charles jests.

D’Amelio has become the TikTok account to beat in terms of followers; a spoon has even been trying. But after the video—which has more than 11 million views—came out on Monday, opinion apparently started to sour. In the top comments, people drag the sisters for their behavior towards May, and praise Charles for keeping the conversation from getting too awkward.

Of course, the double standard at play here was called out. As Hank Green notes in a TikTok about the D’Amelio situation: “People love tearing down teen girls when they make little mistakes but the big teen boys make colossal fuckups and get free passes all the time.”

In response to being called ungrateful by the internet, Dixie posted to TikTok explaining that Chef May has been working with the family for months, and that both he and her “team” know she has a delicate stomach and wanted to get a “reaction” out of her with the snails.

After a tearful livestream explanation of what happened, and some support from Charles, Charli’s moved on too. She posted to Twitter Thursday evening that “tomorrow i will be back posting normal content with a smile on my face!”

A live count of Charli’s TikTok followers shows the number might be going back up, however.