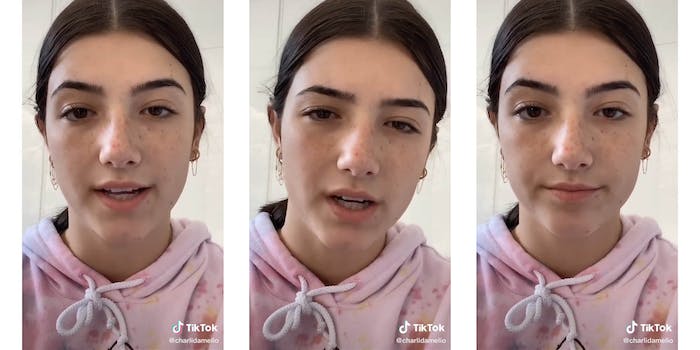 She has more than 60 million followers—and she's taking a stand.

During a weekend of protests across the country for George Floyd and other men and women killed by police, one of TikTok’s biggest stars spoke out about being an “ally.”

On Sunday, Charli D’Amelio posted a video that referenced the injustice of Floyd’s death directly, and stated that “As a person who has been given the platform to be an influencer, I’ve realized that with that title, I have a job to inform people on the racial inequalities in the world right now.” She also mentioned that she changed her profile photo after receiving feedback about using the Black Lives Matter fist image.

The 16-year-old has more than 60 million followers on the app, many of them teenagers like her, and the video has more than 11 million likes. It’s notable after a recent controversy: Her older sister Dixie, also a TikTok star, was called out for a 2017 photo of a Trump-Pence campaign sign. Last month she said she has “never supported Trump.”

This comes as more scrutiny is directed at celebrities and influencers with major platforms who have stayed silent about police brutality, or offered empty gestures of solidarity. While YouTuber Jake Paul allegedly took part in looting this weekend (or, as he later clarified, “documenting” it), beauty vlogger Jackie Aina called out fashion brands “who love capitalizing on black culture, black music, black aesthetic, but are dead silent when it comes to talking about black issues and black struggles in our community.” YouTuber Bretman Rock called out influencers for being “too quiet” on police brutality.

Last week, TikTok was accused of deleting Black Lives Matter and George Floyd hashtags, though the company said it was a “glitch.” It’s also faced criticism for suppressing content from Black creators.