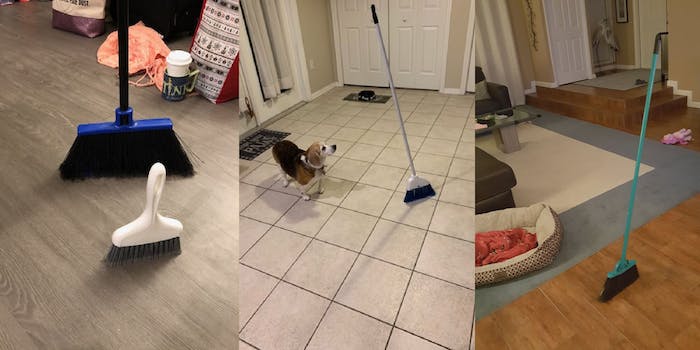 It really does work.

Social media’s newesst sensation is, well… not so new.

The #BroomChallenge, as it has been dubbed online, has actually cropped up before. Nearly every year, in fact, someone makes a claim about the equinox or the Earth’s gravitational pull somehow affecting the way a broom works. The challenge has incentivized people all over the web to post videos of their brooms mysteriously remaining upright without assistance. Except, as it turns out, this has nothing to do with NASA or the Earth’s shifting pull—it’s just how brooms are made.

The challenge appeared to start with a video posted Monday afternoon. “Okay so NASA said today was the only day a broom can stand up on its own because of the gravitational pull,” Twitter user @mikaiylaaaaa wrote. “I didn’t believe it at first but OMG!”

It was a viral gimmick and an old one at that, and there is nothing special about Feb. 10 that results in your broom standing upright.

Once people caught wind of the challenge, it became a viral sensation. People quickly seized upon the opportunity to test their own brooms.

I didn’t know we could do this with our brooms 💀💀💀 #broomchallenge pic.twitter.com/pMXVbX9JKB

Decided to try the broom thing myself… bro 😳 pic.twitter.com/enlGD0NfQd

Lmaooooo RT @YuungJerry__: NASA: Today is the only day a broom will stand on it's own because the earth is at a perfect angle.

me: Bet say no more 😂😂😂 pic.twitter.com/RHFYhnBSlZ

As the challenge became more popular, even celebrities got in on it. From celebs like Paula Abdul and DJ Khaled to teams like the Milwaukee Bucks, everyone jumped on the broom challenge this week.

Pajama broom challenge 😂 What are you doing on a Monday Night?! #broomchallenge pic.twitter.com/1DU7q9bZp4

Unsurprisingly, the challenge quickly morphed to involve more than just brooms. Soon, people online were posting videos of everything from pants and Roombas to chicken wings standing all on their own.

i dont got a broom but yoo this shit is crazy lmaoooo pic.twitter.com/FMUjsLkPEh

Yaw broom sticks are cute but I- pic.twitter.com/CCqI9rf8mF

The reasoning behind our brooms’ unexpected ability actually boils down to simple gravity, as explained by Mid-Michigan NOW’s evening meteorologist Ahmad Bajjey. “This is something that’s been going around for a long time,” Bajjey said in a video. “It’s either something that has to do with an equinox or something or the planets being aligned.”

Bajjey noted that the success of the challenge is largely based on the kind of broom you choose. Some, with flat bottoms, are far more likely to succeed than those with rounded bottoms. “The issue with the broom is its center of gravity is very low,” Bajjey continued. “The weight is all the way down here. So it doesn’t take that much for it to actually stay in one place.”

We would like to clear up some thing in regards to standing brooms. It’s something going wild on social media.  

This means the challenge didn’t work for everyone. If your broom isn’t shaped right or if its bristles are at an angle, your attempt at the broom challenge will likely fail. Thankfully, even the failures were shared online.

I’m seeing this trend rn, but how come MY broom can’t stand on it’s own? SMH. I hate it here 😔😔😔 pic.twitter.com/EV4RlqC03H

Hype around the broom challenge continued to spread, prompting memers to also jump on board.

This #broomchallenge bout to have some bitches holding a broom for the first time in years.

Just because the challenge has been debunked doesn’t mean it likely won’t crop up again. In a few years, someone will make a claim about the Earth’s gravity or Mercury’s atmospheric pull and people will be all over the #BroomChallenge yet again.