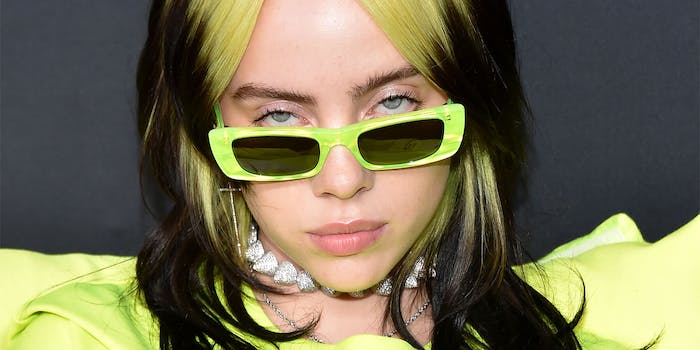 She asked people to message her if she followed their abuser.

Billie Eilish unfollowed everyone on Instagram after posting a story asking people to message her if she follows their abuser.

Not long after posting that message to her story, she unfollowed everyone except for one person. The person seems to be hidden, and it’s unclear who that user is.

“If I am following your abuser, DM me and I will unfollow them,” Eilish posted on her Instagram story. “I will support you.”

The singer has almost 65 million followers on the platform. People on Twitter say the saga began when people started calling her out for following abusers and people suspected of assault, like Justin Bieber, who was recently accused of sexual assault.

Eilish took the advice of her fans and unfollowed Bieber and Chris Brown, according to Twitter users.

Then it appears that fans continued to message her about other people she followed, prompting her to remove everyone.

Some felt like unfollowing everyone missed the mark. Those people said they felt like she did it in the interest of abusers in order to not make them feel called out or uncomfortable.

“Billie Eilish unfollowing every single person on ig instead of only the abusers she got called out for following doesn’t sit right with me,” Twitter user @adouires wrote.

Other Eilish super fans were upset that the unfollow spree resulted in her unfollowing them, but they argued that it was probably for the best. Some people said the young singer has the right to do whatever she wants with her social media platforms.

Still others didn’t seem to care about the drama either way, but they felt like it was a prime opportunity for a good meme.