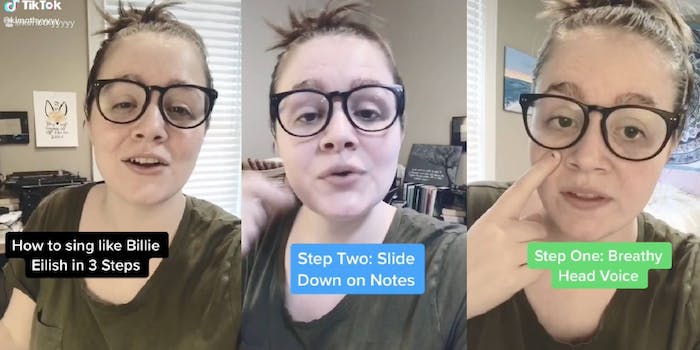 Now, she's teaching people how to sing like celebrities.

A TikTok user is going viral for her on point singing impressions of artists.

TikTokker Kimberly Camacho is teaching people how to sing like different artists using three steps. The singer and actress chooses an artist, explains three defining features of their singing, and then shows viewers how to put them together. She can sing exactly like the celebrity––from Billie Eilish to Celine Dion.

“I try to explain the steps in a simple way that is mixed with technical terms,” Camacho told BuzzFeed. “That way, it will be understood by trained singers, amateur singers, and people who have never sang in their lives.”

The singer started the instructional videos while she was in quarantine. Her video teaching people how to sing like Billie Eilish launched her into popularity, and she’s been growing her fan base since then.

“I decided to get a TikTok to cure my boredom during quarantine,” she told BuzzFeed. “I saw a lot of comedy TikTok videos, so I decided, ‘Why not?'”

In her Lorde video, the singer explains that step one to achieving the correct sound is to put your voice in the back of your throat and make it sound groggy. Then, Camacho explains which vowels and consonants to over accentuate. Lastly, the TikTok user advises people to speak a phrase on the rhythm. And just like that, the singer sounds exactly like Lorde.

People love the TikToks. Her videos are showered in comments from people asking if she’s a vocal coach, celebrating her killer singing skills, and putting in requests.

“Wow you’re incredible and these are so enjoyable! More,” one TikTok user commented on a video showing how to do an impression of Celine Dion.

Some viewers said that they’re not able to succeed at the impressions just yet, but Camacho often reminds people to have fun as they learn and to keep practicing in order to figure out what works for them.

“The way I modify my voice to sound like Celine Dion may be different than someone else whose voice is lower or higher than mine,” she told BuzzFeed.

The good news is that the singer plans to continue helping viewers master their celebrity impressions.

“I love making the videos and I plan on making a Judy Garland one soon,” she told BuzzFeed. “They’re a great distraction right now and hopefully entertaining for those watching. I want it to remain fund positive.”