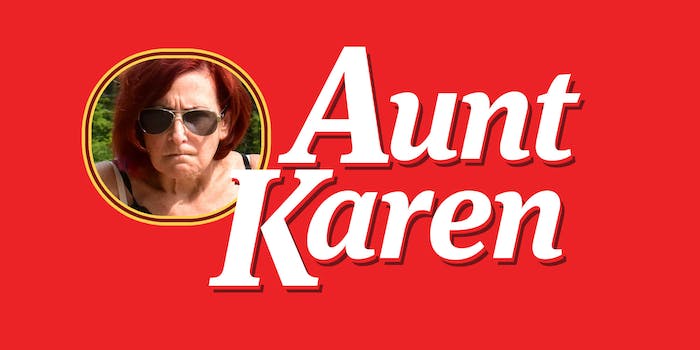 The company is responding to backlash over its racist stereotype.

Aunt Jemima, the syrup and pancake mix brand, will receive a new name and image. Parent company Quaker Oats acknowledged Wednesday that the brand’s “origins are based on a racial stereotype,” according to NBC News.

The change is long overdue, as the 130-year-old brand image originated from a minstrel show character, a racist stereotype of a Black woman. But the retooling of the Aunt Jemima brand raises a big question: What will Quaker Oats rename the beloved syrup?

You can’t blame them for the suggestion. “Karen” is the name on everybody’s lips right now, given the recent influx of viral outbursts from indignant white women who earned themselves the unhallowed “Karen” designation. And, after all, basing your brand off a racist Black stereotype for more than a century is Peak Karen.

Some Twitter users suggested brand artwork for the not-yet-unveiled Aunt Karen, drawing inspiration from recent events, such as the “Karen” who called the police on a man for writing “Black Lives Matter” on his own wall.

Not everybody embraced the suggested name change, however. Given the negative connotation of the name “Karen,” some people thought Aunt Karen syrup and pancakes sounded unappealing.

“I woke up and saw Aunt Jemima, Mrs. Butterworth, and McMuffin trending, and now I’m hungry,” @mmpadellan tweeted. “But I’m pretty sure I don’t want any racism pancakes, thank you, now go away Aunt Karen.”

Others made jokes about how the taste of Aunt Karen pancakes would be far worse than the time-honored Aunt Jemima.

Other folks made it known that they always thought Aunt Jemima syrup was overly sweetened, corn syrup-infested trash—and, by that logic, they fully supported the switch to the name Aunt Karen.

As Twitter user @BlueHeronFarmTX put it: “Look…It’s a crappy syrup that pretends to be a real thing people love, but is a cheap, sad imitation, made of noxious, overprocessed corn. Let’s just go with Aunt Karen.”

The demand for a name change picked up speed after protests against police brutality and systemic racism swept the nation in memory of George Floyd.

A viral TikTok explained the racist history of Aunt Jemima, noting that the founder of the company hired Nancy Green, a former slave, to promote the image of the mammy stereotype.

The video got a lot of attention over the last week, prompting the company to respond. However, Quaker Oats has received criticism for almost a decade for profiting off of the racist stereotype.