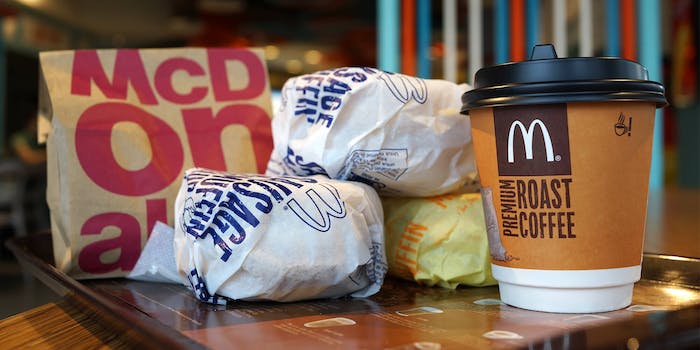 She recorded a video of herself crying.

Editor’s note: This person has been identified as Stacy Talbert, a sheriff’s deputy in McIntosh County, Georgia. This story has been updated to reflect her name and that she’s not a police officer.

A sheriff’s deputy whom the internet has deemed “Officer Karen” went viral for her teary-eyed account of her attempt to order an Egg McMuffin—and Twitter responses are split.

Twitter user @tkag2020_ann shared the video of the officer, whom she refers to as “Stacey,” last night. She’s since been identified as Stacy Talbert. In the video, Talbert details the oppressive experience she had at the McDonald’s drive-thru.

At this point, a McDonald’s employee came to the window and asked Talbert to repeat her order and asked her to pull forward until it was ready. Then, another employee came out to the car and handed her a coffee. That’s when she started to break down.

Talbert then pleads to the camera, asking people to give police “a break.”

“I’ve been in this for 15 years and I have never, ever had such anxiety about waiting for McDonald’s drive-thru food,” she said. “So just have a heart. And if you see an officer, just tell them, ‘Thank you.’ Because I don’t hear ‘thank you’ enough anymore.”

Officer Karen’s McDonald’s plight earned sympathy from some Twitter users, including the person who shared the video, @tkag2020_ann.

“She paid for it in advance and this is how she gets treated for being a cop,” the Twitter user wrote. “Come on America. We are better than this.”

(It is unclear how many McDonald’s customers don’t pay for their food before receiving it; this seems to be standard practice at every restaurant.)

User @dporter721 responded to the video, “Heartbreaking. I weep for the America we’ve lost. Thank you Stacey, and I know true patriots join me in praying for you and ALL of our hard working police officers and first responders. No, you don’t deserve this.”

Others were less sympathetic. In fact, they were concerned that a member of law enforcement who carries a gun on the job has such a low threshold for inconvenience.

“Late food isn’t a f*cking conspiracy, it’s a daily event,” @OtherColinGreen tweeted. “Having a meltdown like this over a f*cking breakfast sandwich tells me that Officer Karen here needs to find another job. This person should not be allowed to carry a gun.”

Twitter user @sadbabyoutlaw made the observation that many fast-food workers probably have to suffer as many, if not more, indignities in a regular shift than police officers.

“Any McDonald’s worker is braver than every single cop,” they wrote.

As of Wednesday morning, “McMuffin” is the highest-trending topic on U.S. Twitter, and “Officer Karen” has begun to pick up steam as well. As the video continues to rack up thousands of views per minute, Talbert’s social media shift seems far from over.