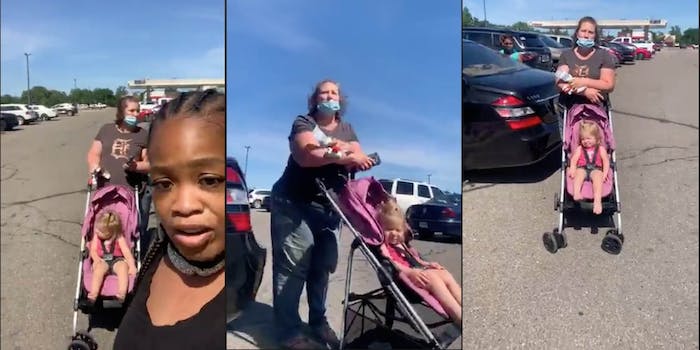 'All the stuff going on out here, protesting and everything, and this is what this woman is doing.'

Detroit police officers responded to a confrontation at a Kroger on Saturday after a white woman stood behind a Black woman’s car and refused to let her leave, Fox 29 reports. Online, she’s been dubbed “Kroger Karen.”

Shaneeka Montgomery-Strickland, 43, posted a Facebook live stream of the encounter and said the woman was upset that her child grabbed an item off of the top shelf.

Shaneeka said her child got a Gatorade from the top shelf and she asked the woman to “please don’t yell at them.” She apparently did so anyway.

Shaneeka said she hurried up and tried to get out of the store and the woman stood behind her car when Shaneeka and her children were about to leave.

“I’m out here trying to do my job… and look at this lady, standing behind my car refusing to leave,” Shaneeka said in the live stream. “I had to call the police to get her to leave. All the stuff going on out here, protesting and everything, and this is what this woman is doing.”

Shaneeka said the confrontation was interrupting her delivery and that she didn’t want her children to “see this mess.”

“I hate that the kids had to see that, but now they see, they were like ‘that lady is racist’ and I was like ‘yeah, she is,’” Shaneeka said in the live stream.

The woman requested that Shaneeka stop recording and delete her live stream, but Shaneeka refused.

“I’ve gotten a lot of responses. People are very angry and upset about it because they say it makes no sense,” Shaneeka said, per Fox 29. “What is wrong with people? Why are they still out here doing this after all that’s going on, all the changes we’re trying to make? After Black Lives Matter? It makes no sense.”

Shaneeka did not immediately respond to the Daily Dot’s request for comment.