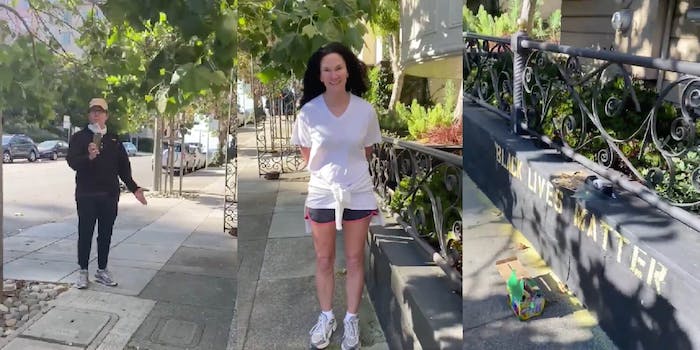 The woman has been identified as a skincare CEO.

A white couple can be seen in a video confronting a man for stenciling “Black Lives Matter” in chalk on the front wall of the San Francisco home he has lived in for 18 years. The woman in the video refuses to believe the man lives in the home.

The woman has since been identified as Lisa Alexander, CEO of LA Face, a skincare company, according to SFGATE. Her husband is only identified as Robert in the video. The couple was later identified by users on the Nextdoor, a neighborhood social networking app.

The person who posted the video, identified by Storyful as James Juanillo, wrote on Twitter that the couple called the police on him.

The couple repeatedly asks the man if the “private property” he is “defacing” belongs to him.

“If I did live here and it was my property, this would be absolutely fine?” Juanillo asks. “And you don’t know if I live here or if this is my property?”

Alexander states that she does know who the property belongs to, claiming it does not belong to Juanillo. “That’s why we’re asking,” she says. “We know the person who does live here.”

Juanillo then suggests they call the person who lives there or call the police. “You’re accusing me of a crime, correct?” Juanillo says. “I would more than be happy to talk to them.”

The couple then accuses him of “illegal” activity. They walk away, saying they are going to call the cops.

Juanillo later told Storyful that the police showed up and didn’t even get out of their patrol car because they “recognized me immediately as a resident of the house. … I didn’t even show them my ID.”

Juanillo later tweeted that while he does not own the house, he has been renting it for “18 years.” He also said that Alexander “does not know the owner” because the owner said as such on TV Sunday. “But again, renter/owner/anybody is free to apply chalk art on our wall. It is not vadalism, defacing or a crime,” Juanillo tweeted.

Alexander addressed the incident via her purported Twitter account. “I asked if he lived there because if he had said yes then everything would have been fine as it was his property. Being a good neighbor is important where everyone takes care of each other. It is too bad he took it in a different direction,” she allegedly wrote.

“We condemn the actions of Lisa Alexander,” Birchbox tweeted. “We have not worked with LA FACE for several years & as a result of the CEO’s actions today have officially cut ties with them. We’ve removed their products from our website & will not be working with them in the future.”