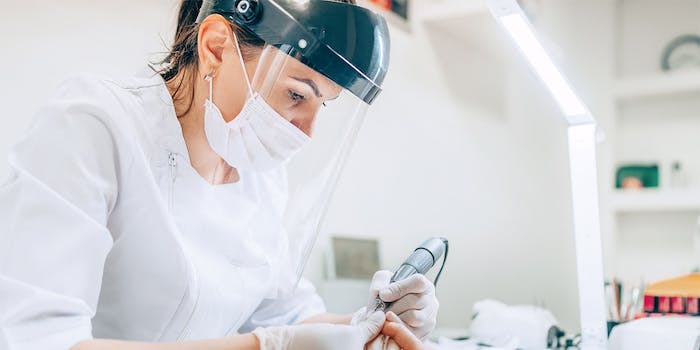 'Apparently my feet are contagious?' she wrote in the tweet.

One woman’s tweet complaining about service workers wearing masks didn’t go down as well as she thought it would, with a backlash so strong and swift it led to her locking down her Twitter account.

Missi Wimberly was apparently very excited to finally be able to go out for a pedicure now that the lockdown restrictions have been lifted but found the protective gear being worn by the workers an offense to her sensibilities.

“I’m so thankful businesses are opening back up,” she wrote in the tweet. “But this is what I had to look at while I got a pedicure today. Apparently my feet are contagious? It’s almost more depressing to be in an environment where people are afraid to be touched than to stay at home.”

She followed it up by snapping a picture of the pedicurist working on her feet and attached it to her rant. There’s no word on whether or not she asked the woman’s permission first, but given that the tweet was critical of both her and her place of employment, it seems unlikely.

People were horrified by her lack of empathy for service staff, many of whom have have had no choice but to go back to work as the easing of lockdown restrictions means the removal of furlough benefits.

Medical staff were particularly outraged, pointing out that they’re wearing this protective gear for your benefit and the stakes are much much higher than a pedicure.

Others emphasized the sheer number of dead (one hundred thousand just in America so far) to try and impart the seriousness of the issue and give Karens everywhere a little perspective.

Unwilling to admit she’d been insensitive, Missi doubled down, briefly unlocking her account to insist that the “ridiculous masks” are unnecessary because the virus has a 98% survival rate (that’s still two out of every hundred people not making it out alive). She went on to say that those who fear catching the virus should stay at home instead of shaming those who “live like we have a working immune system,” never mind the fact that for most workers that would mean a total loss of income.

Her long thread of justifications failed to win anyone around, however, and her Twitter was soon set to private once again.

For many Twitter users, Missi’s attitude is emblematic of the entitlement wealthy white Americans feel towards the people who provide them services. Twitter user Hipster Sasquatch said, “she mistakes purchasing a service for an expression of power, and believes that power *looks* a certain way.” By protecting themselves, service workers are breaking that illusion and that’s what makes Missi and her ilk so angry.