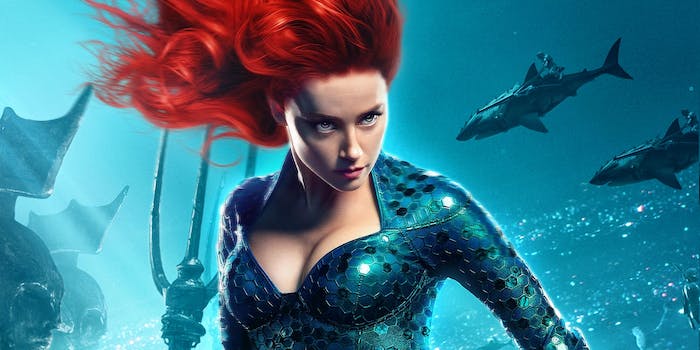 Johnny Depp's fans launched an online campaign to get Heard fired from the 'Aquaman' franchise.

Amber Heard plays the Atlantean warrior Mera in Aquaman (2018), Zack Snyder’s Justice League (2021), and the upcoming sequel Aquaman and the Lost Kingdom. It’s the kind of blockbuster role that usually attracts an enthusiastic fanbase. But on social media, any positive response has been drowned out by a long-running hate campaign led by fans of Heard’s ex-husband Johnny Depp.

In the wake of Depp and Heard’s contentious divorce—and the subsequent lawsuit over Heard’s domestic abuse accusations—Depp’s fans launched a campaign to get her fired from the Aquaman franchise. Now, the sequel’s producer has finally shared a public response: Warner Bros. isn’t interested in the campaign, and Heard is definitely still a part of the franchise.

Over the past year, the anti-Heard campaign racked up over 1.8 million signatures in an online petition demanding that she be fired from Aquaman and the Lost Kingdom. There’s evidence that these numbers were artificially inflated by automated signatures, but it still supports the image of a coordinated campaign against Heard. While Depp has fallen from grace within the film industry, he still has a very active and hostile fanbase on Twitter. This community systematically tries to discredit Heard’s domestic abuse allegations, arguing that Heard was the true abuser, and made false allegations. According to a December 2020 cover story in the Hollywood Reporter, these pro-Depp messages are probably amplified by Twitter bots, with only some tweets posted by “real” fans. Heard herself has also described it as a “paid campaign.”

After Depp was fired from his role in the Fantastic Beasts franchise in 2020, his fans amped up the pressure on Warner Bros. to fire Amber Heard as well. But the studio stood firm. Aquaman and the Lost Kingdom began filming in June, with Jason Momoa and Amber Heard reprising their roles as the two lead characters. Speaking to Deadline on Thursday, the film’s producer Peter Safran said, “I don’t think we’re ever going to react to, honestly, pure fan pressure.”

Saying that casting Jason Momoa and Amber Heard together was “what’s best for the movie,” he added: “One is not unaware of what is going on in the Twitter-verse, but that doesn’t mean you have to react to it or take it as gospel or accede to their wishes.”

The Depp/Heard divorce garnered a lot of media attention, as did Depp’s subsequent libel lawsuit against the British newspaper the Sun, which described him as a “wife beater” in 2018. Depp used this lawsuit to try and clear his name. However, a High Court judge ruled that the Sun‘s description was “substantially true” and that “the great majority of alleged assaults of Ms Heard by Mr Depp have been proved to the civil standard.” The judge dismissed Depp’s claim that Heard was a “gold-digger” who made false abuse allegations, pointing out that Heard’s career and public image suffered after she made these accusations. Heard had also pledged to donate her $7 million divorce settlement to charity, although in 2021 her legal team said this was delayed because Heard had to spend “millions of dollars” defending herself against Depp’s ongoing lawsuits.

Depp’s supporters continue to argue against this ruling, spreading the message that Heard is a liar and that Depp was unfairly penalized when Warner Bros. fired him from Fantastic Beasts. And while the studio has stood behind Heard’s role as Mera in Aquaman, this is unlikely to have much impact on the anti-Heard campaign online.