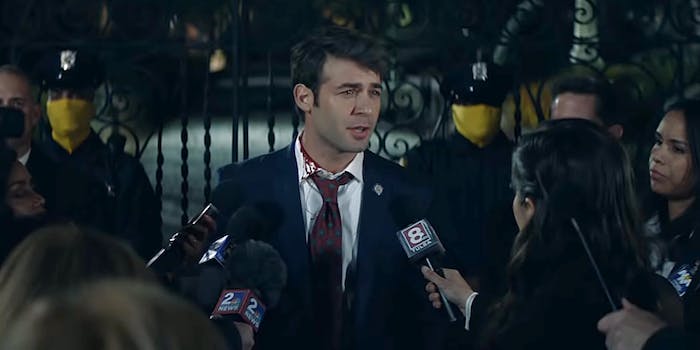 What is Senator Keene’s true role in HBO’s ‘Watchmen’?

He has a complicated (and ominous) political backstory in 'Watchmen' canon.

The Keene Act was a key element of the original Watchmen comic’s political worldbuilding, banning masked vigilantes in 1977—a familiar concept if you’ve read or watched Marvel’s Civil War. The name “Keene” may have been a reference to President Nixon’s advisor David Keene, but since he never directly appears in the comic, the HBO show rewrote him as Republican Senator Joe Keene, whose son plays a key role in episode 3.

Joe Keene Jr. (James Wolk) is a charming young Oklahoma senator who hopes to unseat President Robert Redford in the next election. Along with his family history in opposing vigilantism, he’s a friend of Chief Judd Crawford, whose wife was his campaign manager. And as we learned from this week’s episode (and supplementary documents on HBO’s Peteypedia site), that backstory is pretty complicated, including ties to the KKK.

What was Watchmen’s Keene Act?

The first wave of 1940s superheroes were popular figures, but by the era of Nite Owl and the Comedian in the 1970s, masked crime-fighting was more controversial – especially among cops, who saw vigilantes encroaching on their territory. In 1977, a police strike led the Nixon administration to deliver the Keene Act. (This strike gets a shout-out in episode 3, when FBI agent Dale Petey mentions it was his thesis topic.) Costumed vigilantism was outlawed, and while Dr. Manhattan and the Comedian chose to work publicly as government-sanctioned superheroes, most of the others retired. Rorschach was the big exception, continuing to break the law as a vigilante.

The comic ends in 1985, but an FBI memo reveals that Laurie Blake (aka Silk Spectre) was arrested alongside Nite Owl for breaking the Keene Act in 1995. This is an intriguing detail because by 2019, Laurie Blake is a senior agent in the FBI’s anti-vigilante taskforce. Nite Owl seemingly remained in federal custody while Blake decided to cooperate with the authorities, and now holds a cynical view of costumed adventurers.

Joe Keene Jr. and the Defense of Police Act

Blake’s backstory adds an extra layer of meaning to her meeting with Joe Keene Jr. in episode 3, where he personally asks her to investigate Chief Crawford’s murder. We now know that Joe Jr. spearheaded the Defense of Police Act (DOPA), another law designed to protect police jobs—and by extension, curry favor with police unions as a Republican candidate. While the Keene Act got rid of costumed crime-fighters, DOPA requires police to wear masks. This ostensibly protects cops from reprisals, but judging by what we’ve seen, it exacerbated police brutality in Tulsa. Keene also mentions that other cities want to adopt DOPA, namechecking New Orleans and Atlanta, two cities where the majority of residents are black. It’s not hard to connect the dots here.

DOPA put Joe Jr. in the crosshairs of the Seventh Kavalry, who tried to assassinate him during Chief Crawford’s funeral. (Although he quickly turned this into a photo opportunity.) In turn, the Seventh Kavalry was inspired by Rorschach, the original enemy of the Keene Act. We still don’t know much about the Kavalry, but one thing I keep coming back to here Chief Crawford’s Klan robe, which got a little backstory of its own this week.

Episode 3’s Peteypedia file includes a letter to Sheriff Crawford (presumably Judd’s father) from J. David Keene (presumably Joe Jr.’s grandfather), dated 1955. It refers to the painting in episode 2, explaining that it’s a reproduction of an earlier painting that artist George Catlin sold to cover his debts. I already explored Catlin’s historical significance last week, but this letter puts a new spin on the story.

Transparently racist, Keene refers to the idea of America being “granted” to white colonists by God, calling Native Americans “our savage enemies.” He describes Catlin’s lost paintings as a parable about protecting your legacy, adding that he’s leaving the painting in Crawford’s “custody” as “a totem of the responsibility that you inherited last night.” Since he also mentions “our order,” we can guess the painting is passed down through the leaders of the local Klan chapter. Keene signs the letter “Akia” (“A Klansman I Am”), along with a symbol that vaguely resembles the Klan’s four-pointed cross, an Illuminati eye, or possibly the squid’s eye from the finale of the Watchmen comic.

This feels pretty different from the “masked police vs racist rednecks” concept Watchmen initially introduced in episode 1. The Kavalry and the Tulsa police may be opponents, but this isn’t an “enemy of my enemy is my friend” situation. Under the protection of their masks, the Tulsa PD are beating people up and interrogating them in secret detention centers. We also know that Tulsa’s Chief of Police and Senator Keene have close family ties to the KKK, with Chief Crawford literally keeping a Klan robe in his bedroom. If Joe Jr. wins the presidential election—a young, charismatic senator against a controversial 83-year-old—then the new president will be the direct descendant of a devoted Klan leader.