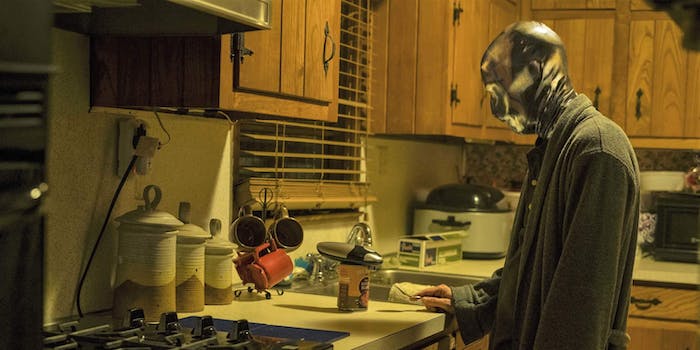 ‘Watchmen’ episode 5: Looking Glass just became one of the most compelling characters

This episode digs deep into the fallout from the comic's original ending.

Mirror-masked detective Looking Glass was a background figure for the first four episodes of Watchmen, but since he’s played by acclaimed character actor Tim Blake Nelson, we knew he’d have an interesting role soon enough. His big moment arrived this week, digging into the pathos behind his vigilante costume. Plagued by anxiety after surviving the psychic blast of the 1985 squid attack on New York, he’s a direct example of Laurie Blake’s theory that vigilantes wear masks to protect themselves from trauma. Rather than just being a wearable version of the two-way mirror in an interrogation room, Detective Wade Tillman’s mask is made from a substance designed to repel psychic attacks. It’s literally a tinfoil hat.

As I’ve mentioned before, Watchmen is obsessed with conspiracy theories and misinformation, exploring a world where the secret truth is often stranger than a comforting lie. For instance, most people in Watchmen believe that “11/2” (the 1985 squid attack) was an accident involving an interdimensional portal. In reality, it was a pre-planned hoax by Adrian Veidt, covered up by the U.S. government. The recent “squidfalls” are presumably hoaxes too. Rorschach’s journal may have revealed what really happened back in the 1980s, but it’s generally regarded as the ramblings of a homicidal crackpot.

Wade Tillman discovers the real truth this week, in a series of events that illuminate him as a tragically compelling character—and introduce a thematically dubious political conspiracy. It was all too believable for Tulsa’s police chief and senator to have a secret KKK backstory, but this episode suggests that practically everything in the show is an elaborate web of false flag operations: Redford’s presidency, the Seventh Kavalry, Veidt’s “death,” and even (in the case of the squidfalls) the weather. It requires us to believe that the people at the center of this web are hyper-competent strategic geniuses, echoing real-world conspiracy theories where both sides of America’s political system are equally corrupt and in cahoots against the common man.

Wade Tillman’s entire life was shaped by his experience on 11/2. Along with the horror of being a lone survivor of an apocalyptic event, the psychic blast was designed by Veidt to create feelings of dread. Everyone in the blast radius was traumatized for life, and as we learn this week, that trauma goes beyond the initial survivors. Wade leads a support group for “friends of Nemo” in Tulsa, sharing their fears and anxieties connected to the attack. He puts on a brave face, but we know he’s secretly wearing a tinfoil hat 24/7. He also rigged his house with an alarm system that he checks with obsessive regularity, mirroring the symptoms of hypervigilance. As always, the episode’s title is significant. “Little Fear of Lightning” is a partial quote from Jules Verne’s 20,000 Leagues Under the Sea: “If there were no thunder, men would have little fear of lightning.”

With Wade rolling up his reflective mask to eat beans straight out of the can, the show draws parallels between him and Rorschach, another paranoid loner. Looking Glass is an altogether more sympathetic figure, though. As a single man living and working alone (literally behind another two-way mirror, both as a cop and as a market researcher), it’s easy for him to hide his vulnerability. Angela Abar knows about his bunker, but she’s not the kind of person who offers uninvited support. And besides, she has a bunker of her own. Compared to Rorschach’s right-wing extremism and lack of social awareness, Wade is a deceptively sensitive person whose anxiety mostly reflects back into himself. In the end, he’s an easy target for a woman who picks him up at the squid support group.

After chatting about their trauma and leaving him with a kiss, she drives off in a lettuce truck, prompting Wade to suspect it’s the same truck whose driver shot a cop in episode 1. Sure enough, he follows her to a Seventh Kavalry meeting that turns out to be very different from the racist trailer park gang he expected. It’s actually a high-tech operation where masked Kavalry members are experimenting with a portal like the one used in 1985. And they lured Wade there on purpose.

Wade is scared shitless, convinced that the Kavalry want to drop a squid on Tulsa. But then Senator Joe Keene Jr. unmasks himself and sits Wade down in front of a bank of TVs. Keene shows him a 30-year-old message from Adrian Veidt to the recently elected President Robert Redford, revealing that a) the squid attack was Veidt’s plan all along, and b) Veidt orchestrated Redford’s route to the White House, praising their shared value of “cultivating true equality.” Progressive policies like Redford’s reparations plan are all based on a lie, and the upper levels of the U.S. government have kept this secret for decades. Wade’s world turns upside down as he realizes that he’s in no danger of facing another “random” squid attack. The video also shatters any illusion of American democracy, confirming that Democrats and Republicans propped up the lie together. The whole system is rigged, from Redford’s multi-term presidency down to the local conflicts in Tulsa, where Keene introduced the Defence of Police Act while he and Chief Crawford led the Seventh Kavalry behind the scenes. As for what the Kavalry are doing, well, we don’t know that yet, but Keene’s “couple of days” ultimatum suggests it may have something to do with whatever Lady Trieu and Will Reeves are planning.

The squid thing often feels like a punchline in Watchmen, an epic Lovecraftian horror that can seem silly compared to the story’s more down-to-earth elements. There’s a morbid humor to that slow pan over New York in this week’s opening sequence, showing the giant tentacles sprawling across Manhattan as Frank Sinatra’s “New York, New York” plays in the background. Wade Tillman’s role forces us to take it seriously, showing how everyday people reacted to the tragedy. We’re used to seeing Adrian Veidt as the show’s comic relief, but guess what? That guy totally murdered 3 million people. And while it’s widely agreed that the squid attack (real or hoax) ended the Cold War and sparked a newly peaceful era of American history, we shouldn’t actually take that at face value.

Watchmen’s America is as messed up as our own, just in a different way. The main storyline is about racism and injustice in Tulsa, but as the show zooms out, we see that everything is being manipulated behind the scenes by powerful white men, regardless of ideology: Redford, Veidt, Keene, Crawford. And now Looking Glass has been unwillingly sucked into their conspiracy, leaving Angela Abar backed into a corner with no allies left. Knowing that Agent Blake bugged his desk, Wade tricks Angela into admitting that she covered for Will Reeves in episode 2. Seconds away from being arrested, Angela disposes of the evidence the only way she can: by eating it. She necks the entire bottle of pills her grandfather left behind; a drug called Nostalgia, referencing Veidt’s signature perfume in the comic. Nostalgia is a way of storing someone’s memories in the form of pills, and Angela just took an overdose.