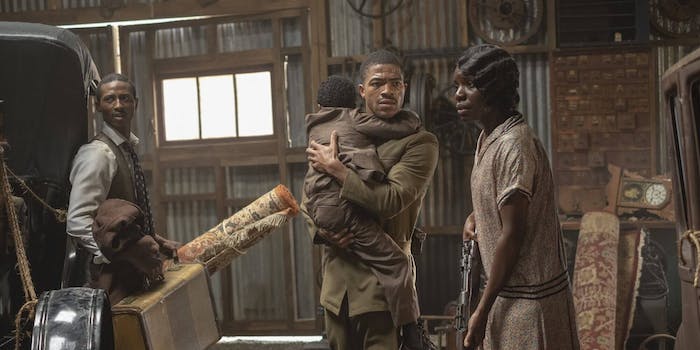 How Watchmen’s Bass Reeves cameo ties into the original comic

The first episode's film-within-a-film ties into the comic's vision of alt-history pop culture.

This post includes spoilers for episode 1 of HBO’s Watchmen.

HBO’s Watchmen begins with the Tulsa Massacre in 1921, immediately signalling the show’s thematic focus on racism. But before we even see the riot itself, there’s another piece of real-life history onscreen: 19th-century lawman Bass Reeves, portrayed by Jamal Akakpo in a fictionalized black-and-white movie.

Bass Reeves was a real historical figure, the first Black U.S. marshal. He lived a terrifically action-packed life, arresting over 3,000 people and often being described as the real-life Lone Ranger, the quintessential Wild West hero. Alongside Zorro and the Scarlet Pimpernel, the Lone Ranger was also a precursor to the superhero genre, combining masked heroism with the 1930s trend for cowboy fiction.

Within the first 60 seconds of Watchmen, that Bass Reeves cameo ties together several important strands between the TV series and the original comic. First of all, he’s depicted as a masked crime-fighter, which is obviously the central concept of the show: a world where cops (and vigilante outlaws) wear masks to disguise their identities. Secondly, he’s a figure whose legacy was largely erased by a racist view of American history, going hand-in-hand with the show’s choice to depict the Tulsa Massacre. Then we have the way he’s introduced, which refers back to a recurring idea in the comic: the way public figures, particularly “heroes,” are reinterpreted by pop culture and historical bias.

Instead of getting his own historical flashback, Reeves appears as the main character in a silent film watched by a young Black boy during the Tulsa Riot. Onscreen, we see Reeves arrest a corrupt sheriff and reveal his crimes to the local citizens, all while wearing a black hood and a mask. When he takes off the mask, his identity subverts our expectations for the notoriously whitewashed Wild West genre. The young boy is spellbound, but although the film is based on a true story, it’s kind of a fantasy. In this kid-friendly version, the white villagers cheer Bass Reeves when he arrests the white sheriff. “Lynch the thief! String him up!” they cry, as Reeves holds a rope around the sheriff’s neck. Meanwhile, in real life, the boy’s neighborhood is being ransacked by his white neighbors. Black people are being shot in the street, their houses burned in broad daylight. There’s no hero coming to save them, especially not someone wearing a badge. (Decades later, the episode actually ends with the lynching of a white police chief, accompanied by a suspicious music choice.)

In the real world, swashbuckling adventurers like the Lone Ranger were overshadowed by the rise of superhero comics. But in the alt-history timeline of Watchmen, things went differently. Masked crime-fighters (albeit ones without superpowers) became a real thing, starting with the Minutemen in the 1940s. The reality of these heroes made them less appealing as an escapist fantasy, so historical adventures persisted as the dominant comic book genre. The original run of Watchmen included excerpts from a gruesome pirate serial called Tales of the Black Freighter, mirroring the real-life evolution of darker superhero comics in the late 20th-century. As the historical timeline of Watchmen diverged from our own, so did its pop culture.

In the same way that the Tulsa Massacre was a historical turning point for the Watchmen universe, that Bass Reeves movie represents a turning point in fictional tastes. In our timeline, this kind of movie would evolve into the superhero genre while Westerns faded into the background. But in Watchmen, it was the precursor to real vigilantes like the Minutemen—and the show’s protagonist. Wearing a black hood, a police badge, and domino-mask makeup, Sister Night (aka Angela Abar, played by Regina King) is an obvious visual riff on that 1920s depiction of Bass Reeves. Considering their Oklahoma connection, Reeves may even have been Angela’s direct inspiration when choosing her costume. Her circumstances, however, are very different.

Between Reeves, Abar, and that boy in 1921, we see three generations of Black Americans with very different experiences of law enforcement: a rose-tinted fictionalization of first Black U.S. marshal, a shockingly realistic depiction of racist violence in the 1920s, and a modern-day scenario where a detective investigates a white supremacist group, meting out her own form of police brutality. And in 2019, Watchmen’s pop culture landscape is different, too. Posters advertise a TV show called American Hero Story, a historical drama about the first generation of superheroes. Just like how Bass Reeves’ life was bowdlerized into a corny adventure movie after his death, the Minutemen became fodder for schlocky true-crime TV.