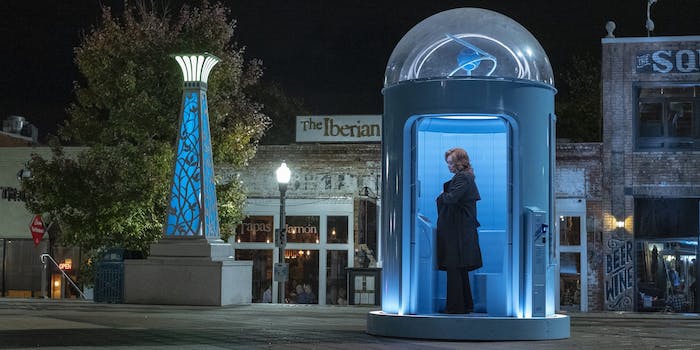 “You know how you can tell the difference between a masked cop and a vigilante? Me neither.” Laurie Blake, aka the former superhero Silk Spectre, made an unforgettable entrance in this week’s Watchmen. Now in her sixties, Blake (Jean Smart) is a senior agent in the FBI’s anti-vigilante taskforce, sent to Tulsa to investigate Chief Crawford’s death.

Agent Blake has little patience for the so-called Defence of Police Act that requires Tulsa cops to adopt masks and secret identities. Armed with a bitingly dark sense of humor and top-tier investigation skills, she kickstarts the classic “local cops vs. federal law enforcement” feud we’ve seen in so many crime dramas before. Both sides are equally compelling here, although neither has the moral high ground. Our sympathetic protagonist Angela Abar is keeping suspicious secrets about Crawford’s death, and belongs to a police department that revels in casual brutality. Meanwhile, Laurie Blake has a cynical view of the Tulsa police and their masks but still doesn’t give a shit about suspects being interrogated in secret detention sites.

They first meet at Crawford’s funeral, where a Seventh Kavalry member arrives with a bomb to kidnap the smarmy senator Joe Keene Jr. (James Wolk), derailed by Blake shooting the terrorist and Angela shoving the now-activated bomb into Crawford’s grave. Like so many heroic moments in Watchmen, it’s possible that Blake’s actions did more harm than good.

While the first two episodes wisely focused on new characters like Angela and Will Reeves, episode 3 returns to familiar figures from the comic. Laurie Blake takes center stage, and Jeremy Irons’ character is finally (and for many viewers, predictably) revealed to be the supervillain Adrian Veidt. His castle is actually a prison, although we still don’t know what he’s doing there—or what’s up with his docile workforce of Downton Abbey clones.

In some ways, this episode is a bit of an intellectual break from the thematic complexity of the first two. Last week was rich with examples of propaganda and historical bias, digging into the idea that history and present-day politics are massively skewed by misinformation. The one-two punch of the Tulsa Massacre flashback and the WWI scene invited viewers to do historical research of their own, examining how these events tie into the show. Episode 3 is more straightforward. With her tough attitude and elaborate one-way calls to Mars, Jean Smart is extraordinarily fun to watch, but not quite as interesting to analyze. What you see is what you get.

Accompanied by a nerdy sidekick with academic expertise in superheroes, Blake is our closest connection to the original comic. Veidt’s storyline plays a similar role to the fantastical Tales of the Black Freighter interludes, but Blake lives in the real world. She’s carved out a new life for herself in the FBI, yet she remains tethered to the past, compulsively phoning Dr. Manhattan like a perverse form of prayer. Plus, there’s that comically huge Dr. Manhattan dildo in her suitcase. Her FBI sidekick Dale Petey (Dustin Ingram) understands more about her background than most people, but he unavoidably views her as a historical figure at first.

Petey is also the only law enforcement character who cares about Rorschach, whose enduring influence is like background noise throughout the show. Much like his unnerving level of popularity in Watchmen fandom, Rorschach’s mask lives on in the Seventh Kavalry. While Dr. Manhattan remains famous, the original Minutemen have their own TV show, and the 1985 squid attack is a cultural equivalent of 9/11, Rorschach is now like the Unabomber or the Zodiac Killer. A morbid historical footnote who is vaguely known by most people, but only truly understood by a few.

Rorschach is arguably the comic’s protagonist, narrating much of the story through his journal. He’s a rare conspiracy theorist who successfully uncovers a real conspiracy, and of course he ends up dead. The comic ends with his journal in the “crank file” of a newspaper, leaving us to speculate whether his words ever come to light. In the timeline of HBO’s Watchmen, they do. We know he becomes some kind of public figure because the Seventh Kavalry copies his iconography for their white supremacist crusade. This week, a senior agent scolds Agent Petey for including an excerpt from Rorschach’s journal during a presentation about Tulsa. “Is it the 1980s, Petey?” he demands. “Then who gives a shit about Rorschach?” Petey is obviously right to care, but if you want more information, you have to delve into the show’s supplementary materials.

HBO’s “Peteypedia” site updates each week with FBI memos, news stories, and other text files from within the Watchmen universe. The two most relevant ones here are Agent Petey’s memos about Rorschach’s journal and masked vigilantes in pop culture. Apparently, Rorschach’s journal did indeed get published, sharing his (accurate) theory that Veidt masterminded the 1985 squid attack as a false flag operation. However, this is generally viewed as a hoax or the ramblings of a mentally ill extremist. Judging by what we’ve seen of the Seventh Kavalry so far, Rorschach’s Veidt theory was primarily appealing in the context of his far-right views on the moral corruption of America. White supremacists accepted his version of events because it fit their pre-existing beliefs about a liberal elite conspiracy.

While the reality of Rorschach’s life remains obscure, his journal ties into a web of fringe groups that echoes something like QAnon or the ongoing (often antisemitic) conspiracy theories about secret liberal cabals. Petey argues that by declaring Veidt legally dead—something that barely appeared as a background detail in the show—the U.S. government risks “activating” groups like the Kavalry. Intriguingly, Petey’s pop culture memo also mentions a Rorschach-themed album by Sons of the Pale Horse, referencing a band from the comic. He says the album comes out on Nov. 4, which could mean this is the first of three real Trent Reznor/Atticus Ross soundtrack albums for the show.

The unspoken motto of Watchmen is, “It’s not paranoia if they’re really out to get you.” Bizarre conspiracy theories turn out to be rooted in fact, even if those facts were warped to fit a racist agenda. Shocking historical events are remolded into simple, palatable narratives. Some facts are simply erased. Angela Abar slowly realizes that her gritty view of reality was more rose-tinted than she thought. She had no idea that Crawford had a Klan robe in his closet, and until recently she didn’t even know her own family history.

And thanks to those Adrian Veidt scenes, we have a regular reminder that along with being dark and frightening, this world is often too absurd to predict. The episode ends with Angela’s missing car coming full circle, dropping from the sky in front of Laurie Blake. She narrowly escapes being killed by space junk, echoing the Devo song from the episode title.