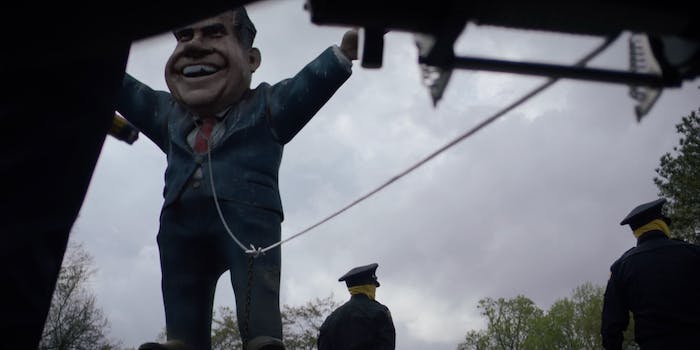 He hasn't been president in more than 30 years. But his legacy is still felt in HBO's 'Watchmen.'

Watchmen effortlessly blends in our own history with a rich deep-dive into an alt-history directly influenced by the events of the comic, and we’re seeing that up-close with a president whose legacy still looms large.

In the series premiere (which takes place in 2019), we learned that the actor Robert Redford has been the president of the United States since 1993, a small but significant hint at how different Watchmen’s reality is to our own. Vietnam is the 51st U.S. state, and we learn that there have only been two U.S. presidents after Richard Nixon, courtesy of Angela Abar (Regina King) and Tulsa police chief Judd Crawford’s (Don Johnson) children as the two colleagues and their families had dinner together: Gerald Ford and Redford.

It wasn’t the first time Nixon had been name-checked by Watchmen: his portrait is included in a poster of “Four Important Presidents,” and the trailer park community where Angela arrests a member of the Seventh Kalvary is named Nixonville. We get another look at Nixonville in “Martial Feats of Comanche Horsemanship” as the Tulsa Police Department, under the belief that a Seventh Kalvary member living there murdered Crawford, attempts to round up the entire shantytown.

In the Watchmen comics by Alan Moore and Dave Gibbons, Richard Nixon is in the middle of his fifth term as president. And while he’s no longer in the picture by the time we reach the TV show, that doesn’t mean that he’s any less influential on the world he left behind.

The Vietnam War played out much differently

The Vietnam War ended in 1975 with the fall of Saigon, putting an end to a war that had become increasingly unpopular the longer that the U.S. fought in it. But with Watchmen’s Nixon at the helm during the war, it had a much different outcome.

The main factor? Nixon sent Dr. Manhattan—the only superhero in the Watchmen comics who actually had superpowers—over to Vietnam in 1971; it’s where Dr. Manhattan also met the Comedian again. Just a few months later, the U.S. achieved victory in Vietnam, with Dr. Manhattan noting that many of the Vietcong wanted to personally surrender to him and viewed him with a mix of terror and “an almost religious awe.”

“I am reminded of how the Japanese were reported to have viewed the atomic bomb, after Hiroshima,” Dr. Manhattan observed.

By October 1985, Vietnam had officially become a U.S. state; a few years prior to its statehood, Angela Abar was born in Vietnam and spent much of her life growing up in the 51st state before moving over to the mainland.

How were Richard Nixon and Robert Redford able to be president for so long?

One of the more striking differences between this alternate world and ours (that don’t involve squids falling from the sky or a lack of smartphones and the internet, anyway) is that presidents no longer have term limits; in our world, they are only allowed to serve a maximum of two full terms (or up to 10 years) thanks to the 22nd Amendment in the U.S. Constitution. At some point during his presidency, Congress repealed the 22nd Amendment, which allowed him unlimited term limits.

But just because he was popular, that doesn’t mean that Nixon’s presidency came without controversy. Per Ozymandias in the comics, Nixon was also in Dallas on the day of President John F. Kennedy’s assassination. And Watergate, the scandal that eventually led to Nixon’s resignation, never came out because the two Washington Post reporters who exposed it out into the open—Bob Woodward and Carl Bernstein—were murdered.

By the time that the Watchmen comic takes place in 1985, Nixon is thinking about running for his sixth term with Redford contemplating a run of his own. (In the TV show, Redford’s first attempt to win the presidency fails.)

Like much of Watchmen’s alt-history, a lot of it is unclear and discernible only in small doses and hints from the Watchmen TV show’s expansion. Nixon was added as the fifth head of Mount Rushmore, but what we’ve seen so far from the TV series suggests that Nixon’s presidency did not age well.

His name is associated with Nixonvilles, itself a play on the Hooverville shantytowns, which were built by homeless people during the Great Depression and named after Herbert Hoover, the president many people blamed for having caused the Great Depression. The Seventh Kalvary member that Angela found and beat up in the series premiere lived in a Nixonville, a trailer park that features a caricaturized statue of Nixon holding up two peace signs with his hands. We get a closer look in the second episode as the Tulsa Police Department drives in to sniff out members of the Seventh Kalvary who might have killed Crawford.

Here, just the mere association with Nixon in Nixonville is enough for Red Scare to assume that the people living within its confines are “racist fucks.”

“Some of you are in the Kalvary, others are not,” he said over a megaphone. “I don’t fucking care which is which. If you can hear my voice, you’re going to walk out of your shitty trailers and into one of these lovely paddy wagons.”

The tensions are high, and the police are swift and brutal in their retaliation against the residents who refused to comply with orders. And in the end, it might’ve all been unnecessary: Angela’s biggest lead so far is her long-lost grandfather Will, who admitted to killing Crawford and hanging him in a tree, although she doesn’t believe him. But it also goes to show just how far a figure can fall with hindsight: in the span of a few decades, Nixon went from a populist hero to someone who’s so toxic that the mere association via a shantytown comes with a lot of baggage.