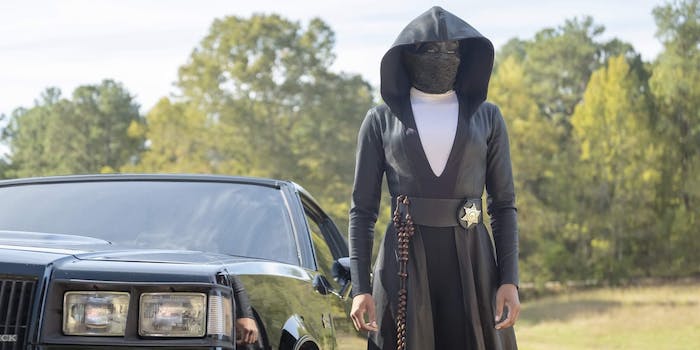 We interviewed Meghan Kasperlik, the designer behind the already-iconic costumes in HBO's 'Watchmen.'

Costumes are central to the world of HBO’s Watchmen, set in a version of America where cops and vigilantes wear masks to protect their identities. Pitched as an indirect sequel to the graphic novel by Alan Moore and Dave Gibbons, the show introduces a cast of new characters with distinctive looks, led by Regina King as the detective/superhero Angela Abar, aka Sister Night.

Unlike the heroes of Marvel and DC, Watchmen’s crime-fighters don’t have superpowers, and they generally design and build their own outfits from scratch. Instead of following the trend for sleek, practical versions of classic superhero costumes like the Avengers, there’s a hint of goofiness to characters like Red Scare and Panda—or Nite Owl and Captain Metropolis in the original comic. These are everyday people who decided to fight crime in homemade costumes, leaning into the absurdity we all ignore for Batman. At the same time, Watchmen really understands the importance of visual symbolism. Episode 1 draws a thematic link between Sister Night’s black hooded outfit and the introductory scene with Bass Reeves, and with the mask-wearing Seventh Kalvary, we see how Rorschach’s extremist legacy spawned a movement. Meanwhile, the police department’s masks are described as a way to protect them from backlash, but there’s already an ominous subtext to the idea of cops hiding their identities.

Meghan Kasperlik (The OA; Fahrenheit 451) is the chief costume designer on Watchmen, working with showrunner Damon Lindelof and production designer Mark Worthington to create the show’s look. We spoke to her about how Watchmen’s costumes differ from other superhero adaptations, and the challenges of designing masks for TV. This interview is spoiler-free, but we’ll post more spoilery details about individual characters after later episodes air.

The Daily Dot: Could you walk me through a few of the main heroes? It felt like there was an aesthetic link between Sister Night and Bass Reeves, and there’s a lot of personality in the masks and costumes for Red Scare, Looking Glass, and the panda guy.

Meghan Kasperlik: Sister Night is this kind of nun-ninja badass, and in later episodes, the backstory of how that character came about will be portrayed on camera. With Red Scare it’s about taking the simplicity… this is a guy that just had this costume probably at home, and threw it on and put a mask on. So there’s not a lot of true custom-making of that costume. But then we get into Pirate Jenny’s costume, and the only thing that’s scripted on the page for her is the name Pirate Jenny. I wanted to make sure that it was something that was cool, obtainable, but a little bit rock’n’roll. A little bit like what this character’s interpretation of a modern-day pirate would be. And that’s why she has the scarf in her hair and the cool jacket with the pants rolled up. It’s more about what’s obtainable, and going from there.

You mentioned what’s in the script. Because masks and disguises are such a central theme in this show, I imagine there was more in the source material from Damon Lindelof than there often is for TV scripts. What was the collaborative process like for that?

Damon is amazing in the sense that he has a backstory for each of the characters but then really lets the creative team—the costume designer, the production designer—move forward with our thoughts, and then present him our ideas. He never wants to hinder or pull back on something that we want to have a creative voice on. So there’s the base that is scripted, and we talk about the backstory and tone and whatnot, and then we move forward. I will work with an illustrator and come up with renderings, and sometimes I’ll find a material or a fabric that I like and incorporate that.

How did the original Watchmen comic influence your work on the show? Are there any particular details and easter eggs you’d like viewers to look out for?

There are Easter eggs throughout the entire series, so everyone should be excited to try and discover them. We used the graphic novel as our ultimate source material. It was on my desk and I looked through it every single day. Damon referenced it a tremendous amount, so we’d always go back to it. In the graphic novel, all of the vigilantes’ costumes are a fairly simple silhouette and simple lines, so that was also important. Making sure to keep everything as clean and simple as possible. Nothing was too high-tech, nothing was too crazy, because we really wanted to pay homage to the graphic novel.

It’s intriguing to see a show with so many masks. What was it like to go into this knowing that you were going to have to find a way to cover all the actors’ faces?

Well, when I read it, I was so excited, because a lot of times you’re never even allowed to put a hat on a character because everybody wants to look at the face and the hair and everything. So it was exciting to know I could come in and cover up people’s faces with an interesting mask. But that brings in many factors that you have to take into consideration. You can’t impede the way the actor is speaking because you don’t wanna have to go back and ADR all of the dialogue.

You want to be able to understand what they’re articulating. Also, every face is different, so we might have tried on a mask on a fit model, but when the real actor came in, their face shape is so different that some masks were better on certain people than others. Additionally, we had to factor in how expressive the actors were going to be with their eyes, how much of the face we can see, and how much to cover up and still be within the rules of what we’ve established. I made some really crazy masks that ended up on the cutting room floor because they were not within the boundaries of something that they could be made at home, or they were a little bit too showy and we needed to simplify.

I’m really interested in the show’s alternate timeline. It spans a hundred years of history, but once we reach the present day, Watchmen’s world is quite different from our own. Did you introduce any alternate-timeline fashion trends, or do people generally dress the way they do in real life?

I kept it pretty much like how people dress in real life. Over the course of history, the silhouette has not changed dramatically from the ’70s. Even the ’50s… you know, the waistline goes up or down, the silhouette goes in or out, but it hasn’t changed a lot. So because we had an alternate universe, an alternate history in the show, I didn’t want to confuse it with more changes in the costumes. You had to think like, “Oh, there’s no cell phones, there’s no computers,” but before cell phones we pretty much dressed the same. I wanted to keep it as simple as possible.

This interview was edited for clarity.