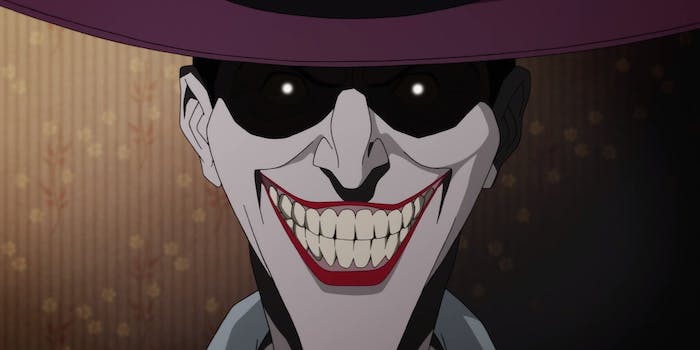 ‘Batman: The Killing Joke’ will be in theaters for 2 nights

Get your tickets now!

Thanks to popular demand, The Killing Joke will screen in theaters for a second night, before being released on Blu-ray and DVD. Fathom Events announced the additional screenings this week with showtimes to choose from on July 25 and 26.

“Due to unprecedented demand, a second date and two additional show times have been added,” Fathom Events said on its event page. “Participating locations for July 26 are limited and ticketing is being set up continuously so click on the orange ‘Buy Tickets’ button to purchase today. If online ticketing is not available for your location, please check back often or visit the local movie theater box office.”

Prior to the expansion, Fathom Events had already reported unprecedented interest for the special screening. According to Variety, it booked 1,075 theaters for the July 25 screenings, and it’s unclear how many of those theaters will also offer July 26 screenings. Fathom Events suggests checking back online often or visiting your local movie theater if online ticketing is unavailable. Alamo Drafthouse theaters are also hosting screenings of the film.

The movie will have an introduction from Hamill, a documentary about how he was cast as the Joker, and a behind-the-scenes featurette on his “memorable, but disturbing” dance number in the movie.

After the screenings, The Killing Joke will be available digitally July 26 and on Blu-Ray and DVD Aug. 2.