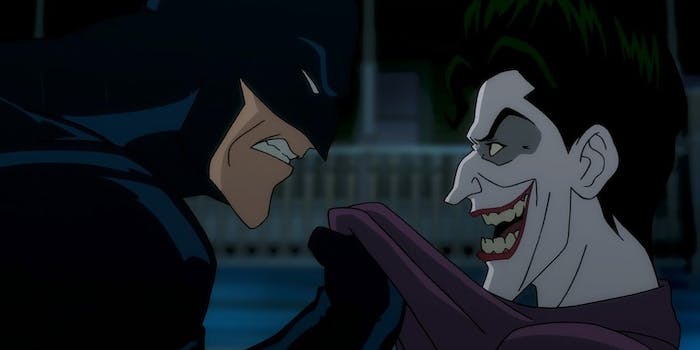 The R-rated adaptation of the iconic Batman story will premiere at San Diego Comic-Con.

For a generation of DC Comics fans, Kevin Conroy and Mark Hamill are the ultimate Batman and Joker. A lot has changed in the superhero genre since Batman: The Animated Series debuted in the ’90s, but it’s still very exciting to hear that the two voice actors will return for an animated adaptation of The Killing Joke.

The Killing Joke movie has been in the cards for a while now, with producer James Tucker saying last year that it would receive an R rating. Now, Conroy and Hamill have officially confirmed that they will reprise their roles. Tara Strong will return as Batgirl/Barbara Gordon, with Ray Wise voicing Commissioner Gordon.

Hamill celebrated his return to the role by posting a photo with his co-star, telling Comic Book Resources that he is “beyond thrilled” to play the Joker again.

The Killing Joke remains one of the most iconic storylines in Batman canon, but its adult-rated nature made it an unlikely choice for adaptation. Now, its time has finally come. People who watched Batman: The Animated Series as kids are now in their 20s and 30s, and films like Deadpool prove that R-rated superhero movies can thrive.

Admittedly, The Killing Joke will be released on DVD rather than in theaters, but if you’re going to San Diego Comic Con this summer, you may have a chance of getting into the premiere screening.