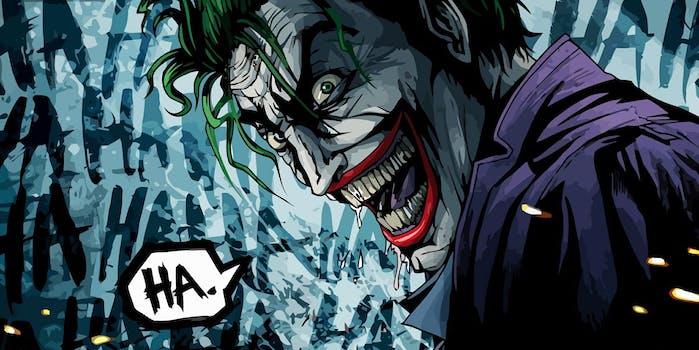 The killing joke won't be suitable for kids.

Warning: Spoilers ahead for The Killing Joke and The Dark Knight Rises.

It looks like one of the darkest moments in DC history could stay that way—at least if the animated film adaptation gets the R rating its producers are considering.

Fans of the Joker have been eagerly awaiting the upcoming adaptation of The Killing Joke since DC announced it at Comic-Con earlier this year. Then news broke that Mark Hamill, who famously voiced the Joker in Batman: The Animated Series and the Arkham game series, would be returning for the animated movie. The combination of Hamill as lead and comics animation legend Bruce Timm returning to produce the film bodes well for fans of The Killing Joke.

The iconic graphic novel by Alan Moore and Brian Bolland is extremely dark: It’s loved for giving the Joker a traumatic but nebulous origin story, and for portraying him as a humanized but ultimately irredeemable psychopath.

It’s also especially notorious for its violence, especially against Commissioner Gordon’s daughter Barbara, a.k.a. Batgirl. Her torture, paralysis, and potential sexual assault at the hands of the Joker gave the DC Universe one of the most shocking jolts in its history, and put Barbara on the path to becoming the Oracle, a role she held for over a decade. The plot point remains controversial and an example of what Gail Simone famously described as the ‘women in refrigerators‘ trope of female characters being assaulted or killed as a device to hurt a male character (in this case, the Joker was intent on driving Commissioner Gordon mad). Last year, the plot point made headlines after DC commissioned, then pulled, then released again a controversial variant Batgirl cover that paid homage to The Killing Joke. Fans widely questioned the choice to put the cover on the typically upbeat and teen-friendly comic.

In other words, despite being an animated film, The Killing Joke is definitely not for children. At the panel for Batman: Bad Blood at New York Comic Con, producers confirmed that everyone involved in the production is thinking about how deeply to incorporate the book’s adult themes.

Producer James Tucker stated at the panel that both DC and Warner Bros. have greenlit The Killing Joke to go as far as an R rating if the production thinks it’s needed. If the film goes full throttle in depicting the violence of the comic, it could make The Killing Joke the first film in Batman history to warrant an R rating—including The Dark Knight.

The possibility of the film getting an R rating could impact several quintessential scenes from The Killing Joke, most obviously where Barbara is shot and tortured, and later the scene where the Joker shows her father (who is also stripped and fitted with a dog collar) pictures of the attack in an attempt to drive him insane. In the graphic novel, we’re only shown hints of what Barbara might have gone through. An ‘R’ rating would allow the producers to be even more explicit—if they wanted to explore one of the most controversial plot points in comics history, that is.

Other scenes that could get beefed up include the scene where a nameless failed comedian learns that his wife and unborn child have both died. Moments later, he falls into a river full of toxic sludge, to be reborn as the Joker with no ties left to his sanity. In the novel this sequence is deliberately downplayed, especially in comparison to the violence the Joker wreaks—and later its entire veracity is thrown into question by the Joker himself, who says that if he’s going to have a past, “he’d prefer it to be multiple choice.” This idea is later taken to its extreme in The Dark Knight Rises, when Heath Ledger’s Joker offers several different versions of his own backstory, none of which fully explain who he is.

An R rating could give the film liberty to delve into more detail—and proportionally ramp up the horror as the story reaches its surreal conclusion.