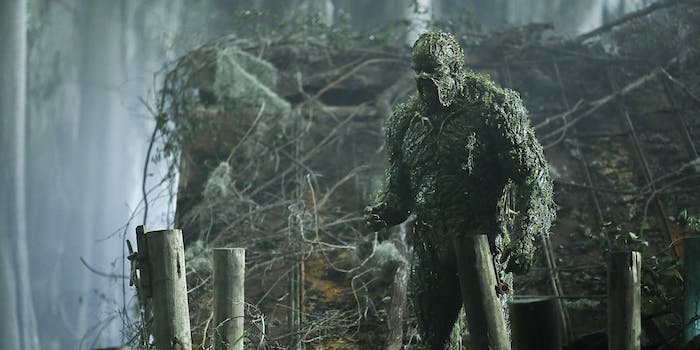 There sure is lots of smoke here.

DC Universe‘s Swamp Thing was canceled after just one episode, inviting immediate speculation because there wasn’t any obvious explanation. It was too early to know anything about the show’s ratings—a metric that’s already complicated on a streaming platform aimed at comic book readers and TV/movie viewers. The show’s pilot episode also got positive reviews. So why was it canceled so fast?

The writing was already on the wall before the show aired, with the series being unexpectedly cut from 13 to 10 episodes. Following the official cancellation announcement, rumors spread that it was due to an accounting error that reduced the show’s tax rebate for filming in North Carolina, leaving its budget in the red. However, a new report from Business Insider suggests that it may be connected to wider problems at DC Universe, with parent company Warner Media planning to launch a new streaming service. The North Carolina Film Office director told Business Insider that tax issues had nothing to do with the cancellation.

DC Universe hasn’t answered any requests for comment, but did post a brief statement on the site’s internal forum, saying “unfortunately we are not in a position to answer at this time.” It emphasized that “DC Universe continues to develop new shows, new seasons, new stories” for the platform. Meanwhile, seven anonymous sources (including a Swamp Thing producer) told Business Insider that the cancellation news came out of nowhere, with producer James Wan posting publicly that he had no idea what happened. One source was expecting Swamp Thing to continue through a three-season run, potentially spinning off into a Justice League Dark franchise.

The rest of the series will continue to air on DC Universe, but this still raises questions about the platform’s future. Compared to other subscription services, it’s hard to see how DC Universe can turn a profit.

DC Universe has to compete with major streaming platforms like Netflix and Hulu, but only offers access to properties based on DC superheroes. That already puts it several steps behind Disney+, which will launch later this year at $7/month, with new big-budget Marvel and Star Wars shows, along with a catalog of Disney classics.