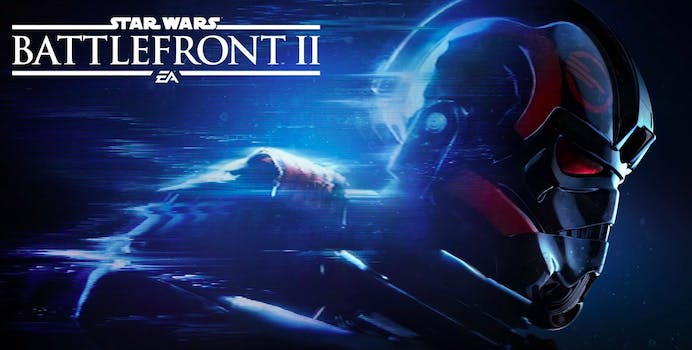 The current state of Star Wars Battlefront 2 is a mess.

Following a harsh critical reception to 2015’s Battlefront reboot, the sequel seemed poised to address most concerns. A new single-player campaign puts the spotlight on Imperial forces immediately following Return of the Jedi. Another studio was brought in to handle space combat, including more dedicated modes in multiplayer. And the expensive, intrusive season pass was done away with in favor of free seasonal updates.

If there was one thing most players agreed on, it was that Star Wars Battlefront was beautiful. Maps from all three original films were realized in stunning quality thanks to the Frostbite engine. Guns looked and sounded exactly like they do on the big screen, as well as the swelling musical score. Thankfully, Battlefront 2 improves everything on the visual front, especially when it comes to recognizable characters. The campaign is elevated thanks to consistently strong performances from the members of Inferno Squad, and iconic heroes don’t look distractingly out of character.

Where the sequel falters, though, is an uneven progression system hindered by paywalled loot crates. Multiplayer this time around is class-based, different from the custom loadouts of the first game. You can play as a standard assault trooper, a bulkier heavy, tactical officer, or long-distance specialist. Each trooper comes with a unique selection of weapons and abilities that can be individually leveled up.

While this initially seems like a promising long road to keep honing your skills and completing challenges, it quickly becomes obvious that substantial rewards are far and few between. A match of Galactic Assault, an objective-based conquest, can take anywhere between 20 and 30 minutes. For that time, and your performance, you’ll typically get around 200 to 300 credits. It takes over 4,000 credits to unlock one loot crate, that doles out random rewards across every available class and hero.

On top of that, there are crystals that can be purchased with real money to open more loot crates faster. Adding in crafting parts only makes the game’s economy more confusing and erases any sense that your time spent in-game is worthwhile. The benefits of paying for loot crates are tangible, as each star card you equip grants a significant bonus. Oftentimes, these include higher weapon damage or more health for your character. A matchup between someone who hasn’t purchased any loot crates and someone who has will always end with the money spender on top.

Following an intense backlash in the days leading up to Battlefront 2’s official launch, EA drastically changed the game’s system multiple times to try and win back some goodwill. The cost of heroes was dropped, coupled with the amount of credits players received per match.

The most recent development has entirely removed the ability to purchase crystals, bringing the game back to a solely gameplay focused progression system. While this is still painfully slow and uneven, it has mostly removed the pay-to-win elements prior to launch. However, some players already made those purchases and have a head start in the game. With the amount of tinkering to a volatile multiplayer ecosystem, it is downright unpleasant to play Star Wars Battlefront 2 online.

On the bright side, the campaign mode is a real highlight while it lasts. The five-hour story is incredibly cinematic and feels like an authentic Star Wars tale. Watching the second Death Star explode from the perspective of a downtrodden Stormtrooper is a novel start, though things quickly devolve into a generic revenge plot. Idea Versio is a compelling heroine to follow and has a unique backstory from other Star Wars protagonists. The story jumps between brand new worlds, iconic battles, and space combat at a brisk pace that wraps up all too quickly.

When you’ve finished the campaign, there’s little else to do than try out the various multiplayer modes. There are some arcade challenges that can be completed locally with another player, but once again the rewards are minimal. However, most of these scenarios let you take control of a hero or high-powered character, empowering you and making the challenges feel worth your attention.

Dogfighting is another strength across the board, with space combat standing out as a consistent thrill. Individual ships can be upgraded the same way as soldiers, bringing back the awful sense of never being as good as the competition if you aren’t trying to buy into the game. Regardless of whether you play as a standard trooper, a spaceship, or Luke Skywalker, the game makes you feel like you won’t be good enough until you drop more cash.

With that model now ripped out of the game, Battlefront 2 is a grind to progress through. Upgrading your weapons and characters takes too much time, games don’t feel rewarding, and the competitive balance is completely skewed. It’s a shame that the game was executed with such obvious love for Star Wars, from an audio, visual, and gameplay perspective.

It looks like Star Wars. It sounds like Star Wars. It feels like Star Wars. Blasters pack a serious punch, lightsabers are a joy to wield, and piloting various ships feels smooth. There is no telling how the game will continue to change over the coming days and weeks, and that makes dedicating a lot of time into the multiplayer modes feel like a waste. With beautiful maps and strong shooting gameplay at its core, there was potential for this experience to be fantastic. But without serious work and a fundamental relaunch of the progression system, Star Wars Battlefront 2 is an incredible disappointment.

Star Wars Battlefront 2 is available now for PC, PS4, and Xbox One.

Disclosure: This review was written with a copy of the game provided by the publisher.