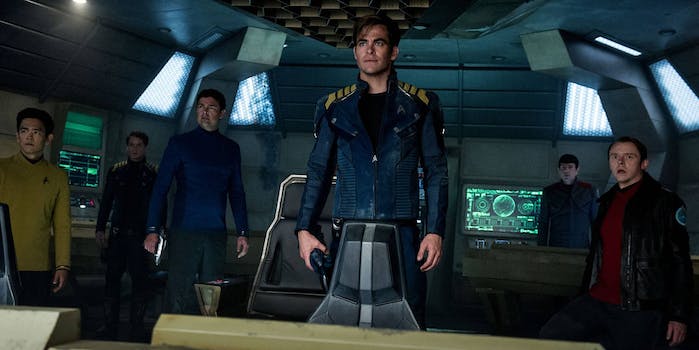 'Star Trek Beyond' combines the tone of the original series with Jusin Lin's friendship and explosions formula.

With Justin Lin taking the helm after J.J. Abrams moved to the Star Wars franchise, Star Trek Beyond finds the sweet spot between the excitement of the 2009 Star Trek movie, the charm of the 1960s TV series, and the friendship-and-explosions formula of Lin’s work on the Fast and Furious movies.

Beyond is a by-the-books action/adventure story, with the crew of the Enterprise going up against a fleet of drones led by a warlike villain named Krall (Idris Elba). It can feel a little clunky to hear Krall explain every step of his evil plan, but in the way of many movie villains, this can be excused because he’s clearly desperate for people to listen to him talk.

The worldbuilding may be puddle-deep, and some scenes are reminiscent of the beloved Star Trek parody movie Galaxy Quest, but none of this actually detracts from Star Trek Beyond‘s entertainment value as an action movie. It also has a lot more soul than the muddled Star Trek Into Darkness, which simultaneously aped the iconic Wrath of Khan, and felt tonally indistinguishable from several other summer blockbusters that year. 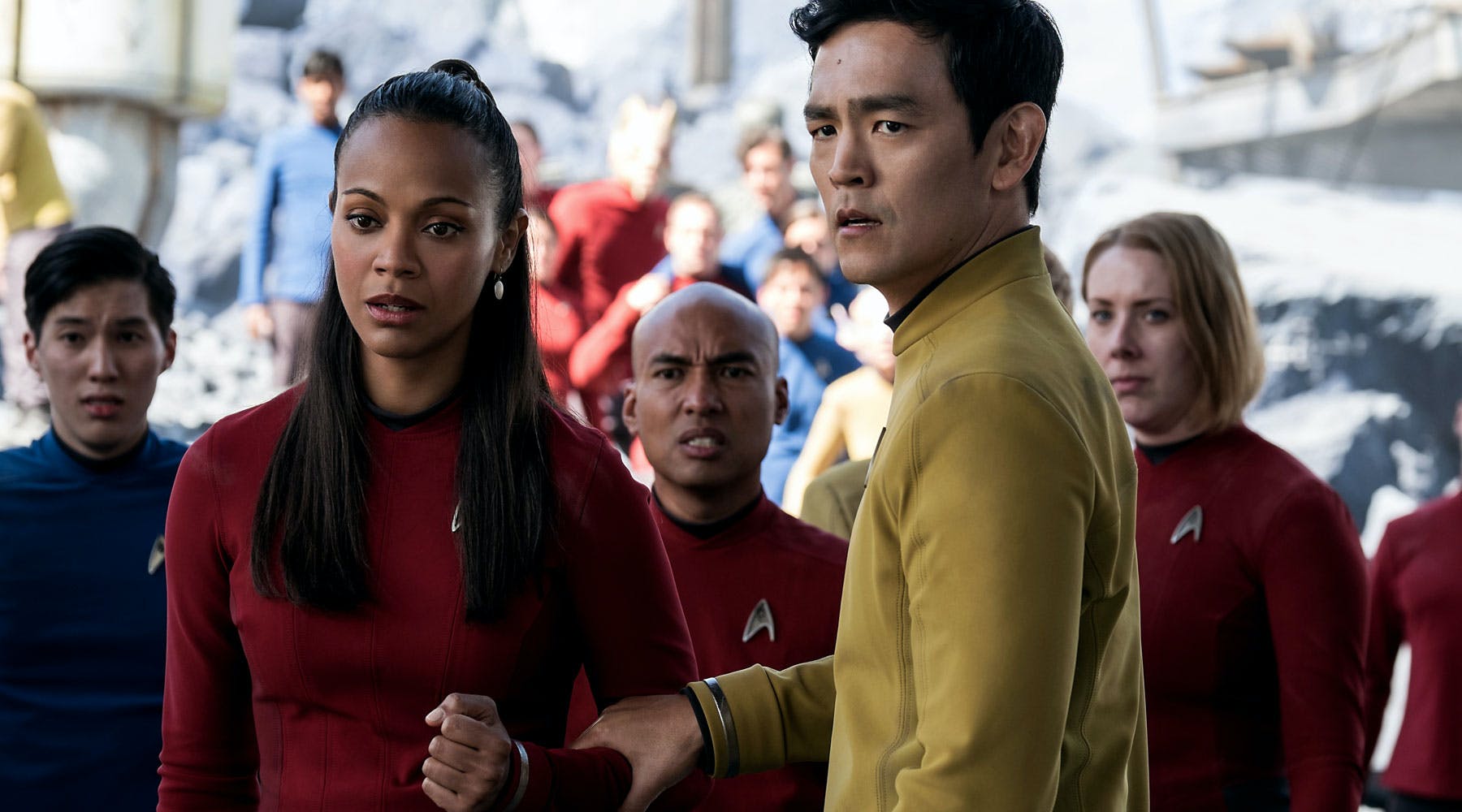 Moving past Kirk’s growing pains as a young captain, screenwriters Simon Pegg and Doug Jung went in a surprising direction for his character development in Beyond. Halfway through the Enterprise’s five-year mission, Kirk has lost his sense of purpose and feels unmoored by the “episodic” nature of the crew’s adventures. For a hero who was characterized as a swashbuckling explorer in the TV series and an adrenaline junkie in the new movies, this feels like a strange choice until you remember how young he is. The Kirk of the TV series was a self-assured leader in his 30s, whereas Chris Pine‘s Kirk was thrown into command before he graduated college. It makes sense for him to be a little unsure of himself, and this sets up a simple but effective arc as he reaffirms his love for exploring strange new worlds.

There are plenty of callbacks to classic Trek tropes—Kirk’s shirt getting torn in an alien brawl; the Enterprise being blown to smithereens for the umpteenth time—but Pegg and Jung have a lighter touch than the role-reversed Wrath of Khan reboot we saw in Into Darkness. Instead, we get a straightforward adventure story where the Enterprise crew are stranded and kidnapped by Krall and his followers, locked in a beautifully designed mining facility that resembles a very expensive version of the colorful sets in the original series.

Justin Lin was an unexpected choice for Star Trek, and some fans were a little nonplussed by the action-packed trailers featuring Kirk leaping over rock formations on a motorcycle. Where was the philosophical message, the smart political subtext that made Star Trek stand out from other sci-fi franchises? But this judgement forgets the other tenet of Lin’s work on Fast & Furious: the constant emphasis on family and friendship. This comes across as the film’s prevailing theme, right down to the small but important detail of Sulu (John Cho, electrifyingly cool as ever) being given a husband and child: the first canonically gay character in Star Trek cinema, or in any other Hollywood franchise if this type. 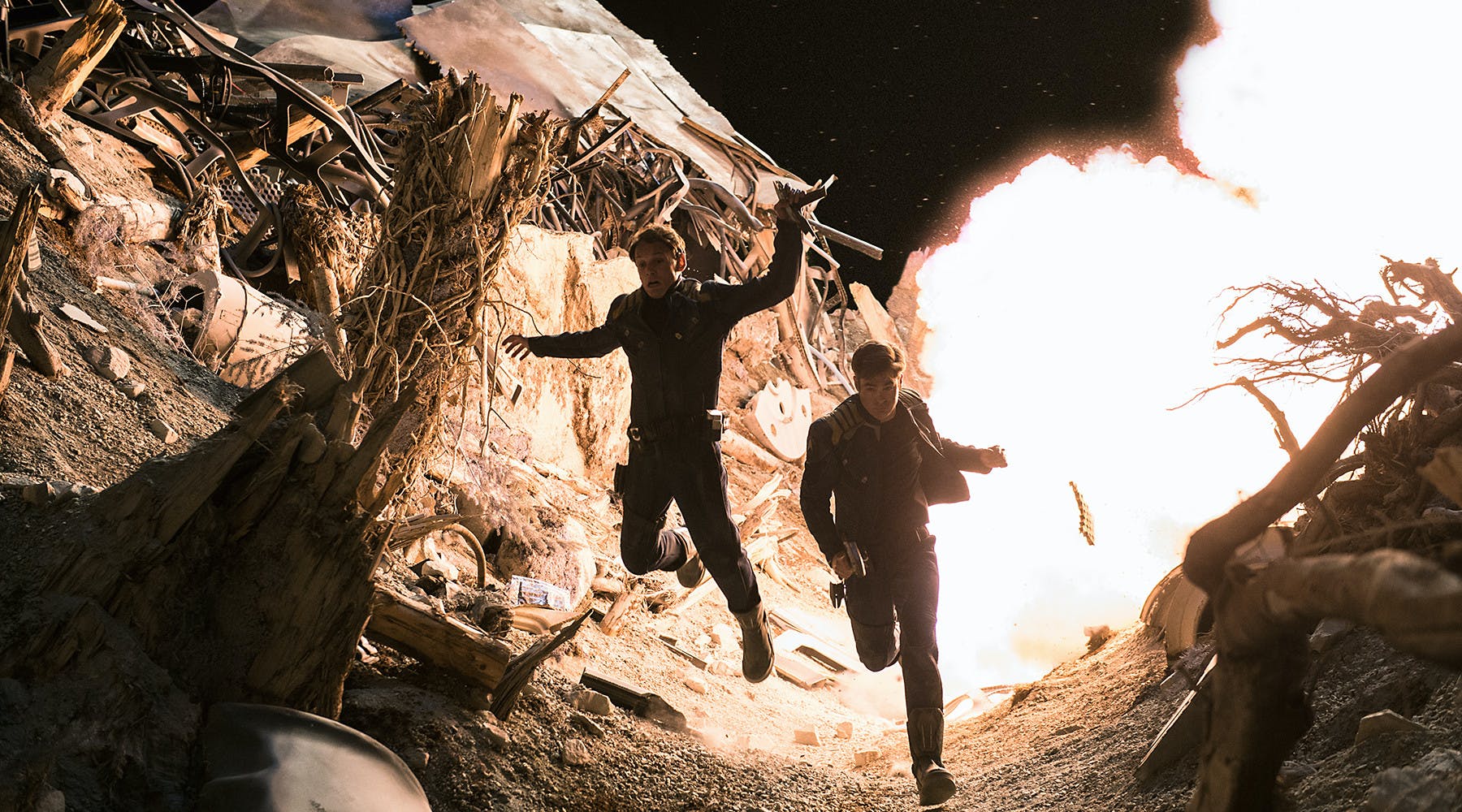 Unlike the previous two movies, which often pitted the heroes against each other or ignored the peaceful purpose of the Enterprise’s mission, Beyond portrays the crew as a unified front. Everyone seems to like and respect each other, with an overt sense of loyalty across the ranks. While Krall desires chaos and war, the Enterprise crew espouse the values of the Federation, a flawed but ultimately positive union between civilizations across the galaxy. (You can’t help but wonder if there’s a coincidental hint of anti-Brexit subtext, there.)

Along with this newly optimistic attitude, Pegg and Jung rewrote one of the more jarring details of the previous two films: Kirk’s douchey personality. J.J. Abrams and his screenwriters twisted Kirk’s warm-hearted sluttiness into an unpleasant fratboy attitude toward women, coupled with pointless underwear shots of female characters. Beyond quietly dispensed with this low-key sexism, and avoided casting the new female lead as anyone’s love interest. Jaylah (Sofia Boutella), a survivor of Krall’s prison colony, gets one of the most fleshed-out emotional arcs in the movie, and her martial arts skills are a lot more impressive than Star Trek‘s typical hand-to-hand combat scenes: Chris Pine being flung against a bulkhead by someone in a rubber alien mask.

After a summer of disappointing and lackluster franchise movies—not to mention depressing real-world news—Star Trek Beyond is a welcome respite. Blending the optimism of the “To boldly go…” motto with the high-octane fun of Fast & Furious, it feels like precisely the kind of action movie we need right now.