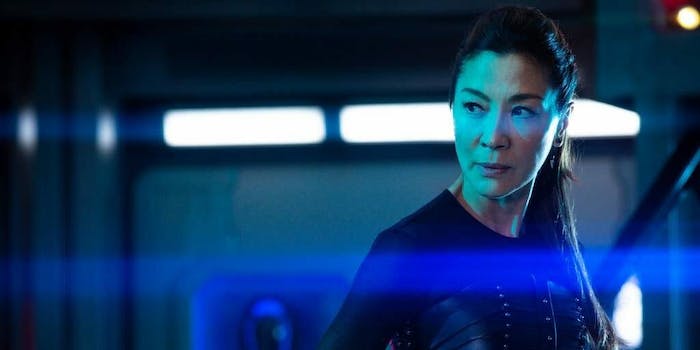 Captain Georgiou will cross over from 'Star Trek: Discovery' to a show about Section 31.

Michelle Yeoh is getting her own Star Trek spinoff series, continuing her role as Captain Philippa Georgiou in Star Trek: Discovery.

The series will focus on Section 31, a black-ops organization that works secretly within Starfleet. Previously appearing in earlier shows like Star Trek: Enterprise and Deep Space 9, Section 31 will return in season 2 of Discovery, as Georgiou joins the organization. Since Section 31 is typically portrayed as morally ambiguous compared to the utopian ideals of the Federation, Yeoh’s new spinoff could be darker than Discovery.

While Georgiou was introduced as Michael Burnham’s Starfleet mentor in the first episode of Discovery, she was soon killed off. The character who appears in later episodes (and in Michelle Yeoh’s spinoff series) is actually an evil Mirror Universe version of Georgiou, who at one point ruled the galaxy as a despotic emperor. Now trapped in the main Star Trek universe, she’s found a fittingly dark and cynical home within Section 31, contrasting with Burnham’s more idealistic role.

This is just one of several new Trek shows in the works at CBS, including a Captain Picard sequel series with Patrick Stewart, and two new animated projects.