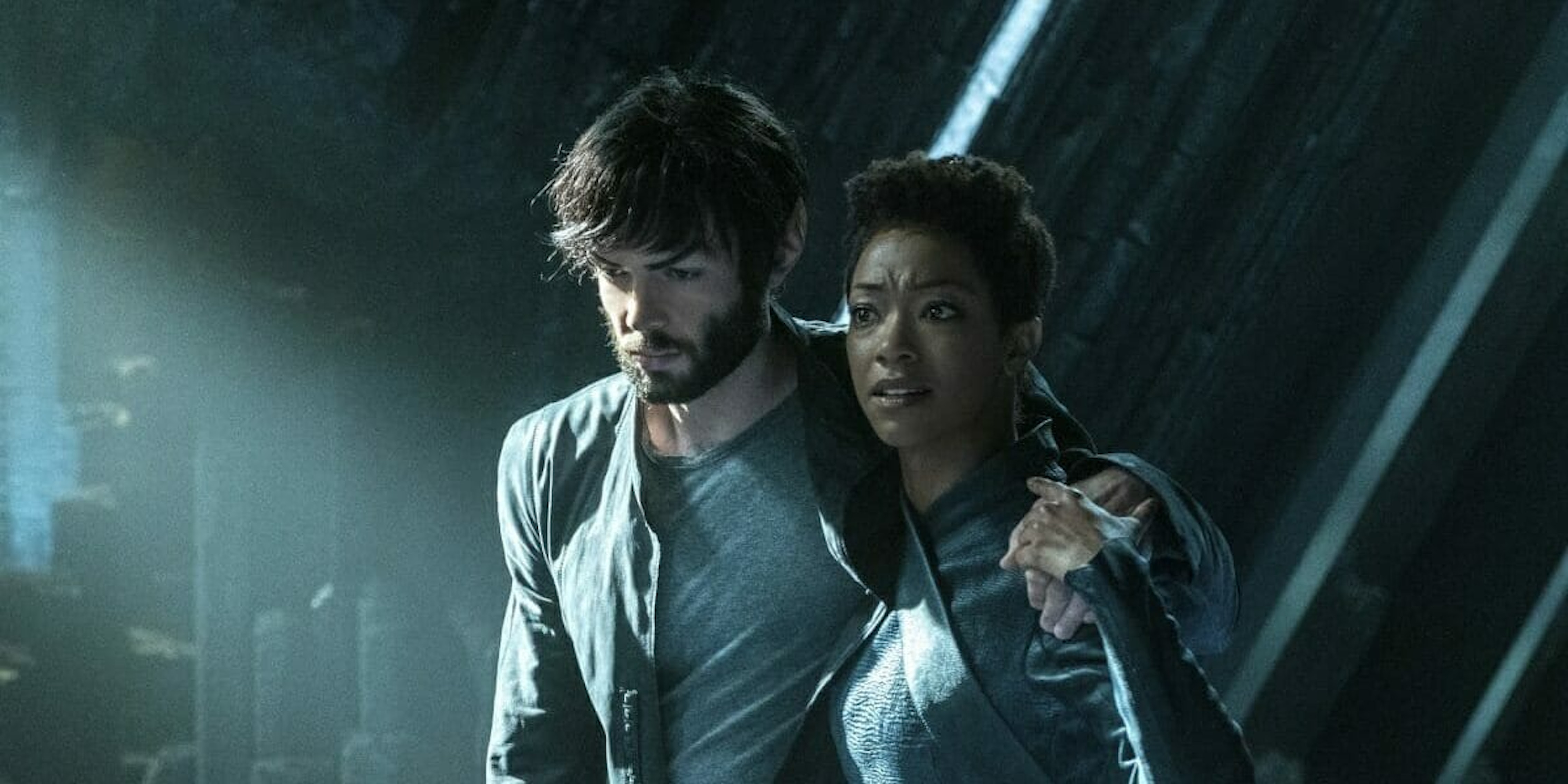 Plus: Why isn't there a therapist on this ship?

Why doesn’t the U.S.S. Discovery have a therapist onboard? A few weeks ago this felt like a temporary oversight, but now it’s downright baffling. After coming back from the dead, Hugh Culber is clearly traumatized and disengaged from his previous life, but no one has even hinted that he should seek mental health treatment.

It’s weird because in other regards, Culber’s emotional arc is thoughtfully characterized and a welcome showcase for Wilson Cruz, who didn’t get much to do last season. Of course he’s having trouble returning to his old life. Of course Stamets is in denial about Culber’s problems, too distracted by his resurrection to notice the resulting trauma. Their reactions to Ash Tyler are equally realistic, with Stamets trying to sidestep the problem while Culber rightfully freaks out at seeing his own murderer walk free.

This all came to a head this week, as Culber confronted both Stamets and Tyler—the latter in a full-on brawl. Oddly enough, that fight led to a more comforting conclusion than we saw for Stamets and Culber. After Saru lets Tyler and Culber fight out their issues in the mess hall, they realize they’re actually kindred spirits, both disconnected from their original identities. Meanwhile, Culber and Stamets break up during a dinner date, with Culber saying he no longer recognizes their life together. He’s now isolated himself from his main source of emotional support, and it’s truly wild that no one suggests getting professional help. The Next Generation may be the only Star Trek series with a counselor on the main crew, but even in the 1960s, someone would probably tell a traumatized crewmember to visit Dr. McCoy.

This lack of mental health support feels contrived and implausible for Star Trek’s enlightened setting. Discovery should have a therapist on its medical team, and at the very least, you’d expect some kind of protocol for handling near-death experiences. Instead, people basically left Culber to handle his own issues, leading him to start a fistfight and torpedo a longterm relationship. Bizarrely, the aftermath focuses on Pike discussing Saru’s response to the fight, with no mention of treatment for Culber’s underlying problems. What?

Culber’s trauma was actually the B-plot this week, but I had to get it off my chest before we move onto the truly big news: Spock. Who, incidentally, just got out of a mental hospital himself. So we know treatment exists somewhere in the Star Trek universe, even if it’s mysteriously absent from the U.S.S. Discovery.

Spock’s return was oddly underwhelming last week, in a downbeat episode that introduced some problematic elements to Spock’s backstory. “If Memory Serves” was a step up, tying into Captain Pike’s 1960s debut with a pleasingly retro tone. The previously-on-Star-Trek intro was a nice touch, featuring clips from the original series when Spock and Pike first beamed down to Talos IV, the setting for Spock and Michael’s big reunion.

After spending most of his debut episode unconscious, this week actually gave Ethan Peck something to do. He’s got the Vulcan mannerisms and vocal patterns down pat, giving a performance that resembles Old Spock without being a meticulous impression of Leonard Nimoy. In other words, exactly what you’d hope for. (He also wears skin-tight leather trousers, a detail that feels like a parody of gritty reboots until you remember that Spock is canonically a total fashionista when he’s out of uniform.)

The trip to Talos IV is a convoluted excuse to explore Spock and Michael’s backstory, as the Talosians—a bunch of psychic weirdos with giant grey heads—probe their memories. It’s an unnecessarily complicated setup for more exposition in an already exposition-heavy storyline, but hey, it’s Star Trek.

When Pike and Spock visited this planet three years ago (ie. in the 1966 episode “The Menagerie“), they learned that the Talosians can create convincing psychic illusions. Talos is also home to a human woman called Vina, who had a brief affair with Pike before the Enterprise left. Vina stayed behind, so when Michael and Spock show up, she’s still there – complete with 1960s makeup and a minidress. She explains that the Talosians can help with Spock’s mental breakdown, which is linked to the Red Angel’s time travel powers. However, they’ll only help in exchange for Spock and Michael sharing a painful memory. A convenient excuse to delve into their backstory.

In the end, Spock and Michael’s big falling-out is simpler than I expected. They had a close relationship as kids, back when Spock was more in touch with his human emotions. That all ended when Michael tried to run away from home, hoping to protect her new family from Vulcan blood purists. When Spock tried to follow her, she discouraged him in the most brutal way possible: By calling him a half-breed and saying he’s not human enough to feel love.

As an adult, Spock knows she was trying to break off their relationship for his own safety, but the damage is already done. This event precipitated his obsession with Vulcan logic, causing him to repress his human side. We know from later series that Spock will only resolve his Vulcan/human identity issues after years of friendship with Kirk and his crewmates, and at one point he even attempts Kolinahr, an extreme Vulcan ritual to purge all emotion.

While Spock’s deeper issues take decades to heal, we may see him mend the rift with Michael this season. At any rate, we already have the seeds of an entertaining sibling relationship. Even in such a serious episode, Spock and Michael had a real bickering-kids vibe. When they were crashing into a black hole, they were literally slapping each other’s hands away from the ship’s controls. It paves the way for a fun but believable new side to Spock, who currently takes himself far too seriously.

Despite his dignified image of serene detachment, the original Spock was more relaxed than the guy we meet in this episode, who hasn’t grown into Leonard Nimoy’s subtle humor. Ten years younger, this Spock has the slightly condescending vibe of a 20-something with too much confidence in his abilities. He’s determined to handle the Red Angel alone, while characters like Amanda (his mom), Michael (his older sister), and Pike (his surrogate father-figure) race around the galaxy trying to help.

Speaking of the Red Angel, the Talosians offer one revelation that’s pretty intriguing (that the Angel is just a human woman) and one that’s so huge it feels meaningless. Scaling up from the planet-killing weapon in the 2009 Star Trek movie, the Angel showed Spock a future where every planet gets destroyed. So this storyline is about preventing the end of all sentient life. We know that won’t happen, and when it comes to planetary explosions, Star Wars is better than Star Trek. This isn’t an action franchise, so instead of being a thrill ride with an apocalyptic maguffin, the Red Angel arc is the least interesting thing this season. So far, it mostly involves people explaining stuff to each other.

For me, the interesting part isn’t how Spock and Michael will save the universe, but who the Red Angel really is. Since time travel is involved, it could be anyone from a main character to a figure from the distant past or future. And with three episodes left, we’re sure to find out soon.

What’s up with Airiam?

While Spock and Michael explored their deep-seated issues and Hugh Culber failed to explore his, Pike dealt with some suitably captain-ish problems on Discovery. Along with critiquing Saru’s new command style and trying to figure out where Tyler’s loyalties lie, he investigated a mysterious hacker interfering with the ship’s systems.

After receiving a psychic transmission from Vina (who the show valiantly tried to depict as a believable love interest), Pike chose to follow Michael and Spock to Talos IV, disobeying orders from Starfleet. The episode ends with a couple of cliffhangers: Pike decides to take the whole ship on the run to protect Spock from Section 31 and he wrongfully imprisons Tyler as the anonymous saboteur. In reality, it’s the robot/cyborg Airiam, whose current role is to lurk ominously in the background until we find out what’s going on.