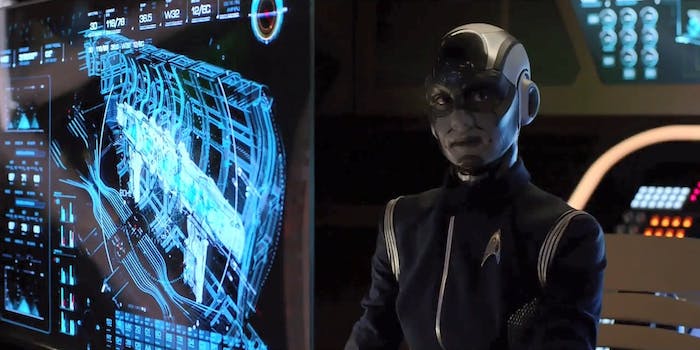 Airiam is a member of the Discovery's bridge crew, and she's a unique character in the 'Star Trek' universe.

Like previous Star Trek series, Discovery includes several Starfleet officers who appear in every episode, but aren’t members of the main cast. Helmswoman Kayla Detmer (the redhaired lieutenant with the cranial implants) is already a familiar face, and while you may not know her name, you’ll definitely recognize Airiam.

Airiam is the silver-headed character who looks like a robot—although as it turns out, she’s actually an “augmented human.” In other words, a cyborg. On this week’s After Trek, showrunner Gretchen Berg discussed Airiam’s origins with makeup artist Glenn Hetrick. Apparently Airiam began as a sketch nicknamed “plate face,” and they loved the design so much, they made her a recurring character.

Played by Sara Mitich, she’s a science officer who helps to operate the spore drive.

She’s a new kind of character within Star Trek canon. While characters like Geordi La Forge and Kayla Detmer use electronic implants for medical purposes, fully-fledged cyborgs are rare. That’s why the Borg were such a dramatic opponent to the Federation.

Judging by her appearance, much of Airiam’s body is covered with synthetic skin, and she seems to have augmented eyes. Were these upgrades a medical necessity, or is this an extreme kind of body modification?

Airiam is exactly the kind of background character that makes the Star Trek universe so fascinating. On the surface, she just looks like a cool robot. But as soon as we start thinking about it, her presence invites a ton of questions about Discovery‘s worldbuilding. As After Trek points out, they’ve barely scratched the surface of her role.

She’s due to appear in future episodes, so maybe we’ll learn some of the backstory for her cyborg appearance—and find out if she has any special abilities.