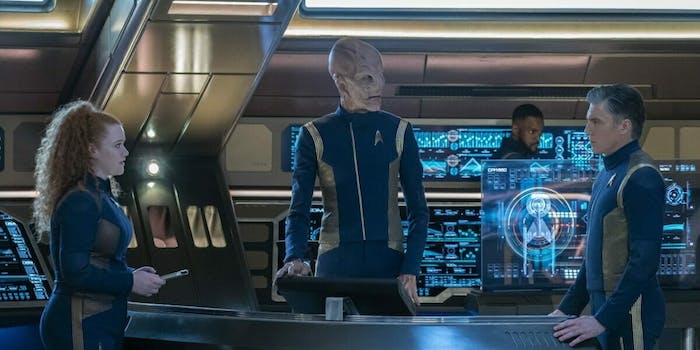 Spock returns in this week’s ‘Star Trek: Discovery’ – but he’s a changed man

This one's a game-changer, but was Spock's return worth the wait?

Young Spock made his long-awaited debut this week, although it was a more lowkey role than expected. Incapacitated by a mental breakdown, Spock (Ethan Peck) mostly exists as a plot device in the ongoing Red Angel story, mumbling Vulcan mantras and scrawling codes on the wall of a meditation chamber. We assumed he was still on the run, but it turns out that his mother Amanda hid him away on Vulcan, protecting him from Starfleet investigation—and even hiding him from his father Sarek.

Last week: Saru returns to his home planet for a powerfully political episode

After a string of great episodes this season, “Light and Shadows” returns to a couple of Discovery’s weaker points. Spock’s return reaffirms the show’s role as a prequel instead of doing its own thing, revealing that the Red Angels tie into an original series episode. We also learn some key details about Spock and Michael’s backstories, but in a way that feels more like an informative update than organic storytelling.

When Michael visits her parents, she learns that Spock has the Vulcan equivalent of dyslexia, contributing to his troubled childhood. And in a scene with Section 31, Georgiou reveals that her boss, Captain Leland, had a hand in the death of Michael Burnham’s birth parents—a surprising and, to me, not especially welcome new Tragic Backstory.

Spock’s childhood never seemed like a laugh riot, but Discovery continues to paint his parents’ marriage in a more depressing light. By harboring Spock, Amanda rebelled against Sarek’s wishes, culminating in an argument where she says outright, “I don’t live under your authority.” The original series did a good job of balancing Sarek’s overbearing nature with a seemingly happy and loving marriage, but Discovery makes a less convincing argument. Also, the whole Vulcan dyslexia thing is a potentially dubious choice.

On the one hand, it’s cool to see Discovery make such a clear statement about learning difficulties. Spock struggled in school, and the story frames this as a problem with the inflexible Vulcan education system, not with Spock himself. Once Amanda found more accessible teaching methods, Spock flourished. However, this puts a weird spin on the racial subtext of Spock’s origin story. Throughout the franchise, Spock faced prejudice from other Vulcans due to his half-human heritage. The 2009 Star Trek movie literally had Spock join Starfleet because the Vulcan Science Academy described his human mother as a “disadvantage.” Spock’s life was shaped by this kind of bigoted assumption, with other Vulcans persistently viewing him as inferior.

“Light and Shadows” reinterprets this idea in a troublingly literal way, with Amanda saying he inherited “human difficulties” including “a learning disability” from her. So the episode simultaneously criticizes the rigidity of Vulcan cultural norms, while almost endorsing the idea that Spock’s academic issues were due to his human genes. If anything, it’s a more confused allegory than the Deep Space Nine episodes “Melora” and “Doctor Bashir, I Presume?,” which explored disability in the Star Trek universe back in the 1990s.

This version of Spock may genuinely be different from the one we knew before. The Red Angel storyline is building up to some epic time travel shenanigans, which could divert Discovery away from the timeline of the Original Series – or even bridge the gap between the movie and TV universes. Either way, I haven’t seen enough of the new Spock to form an opinion on Ethan Peck’s interpretation. He spent this episode either unconscious or muttering incoherently, as Michael followed Sarek’s (characteristically terrible) advice to hand Spock over to Section 31.

Thanks to his knowledge of the Red Angels, Section 31 is keen to get its hands on Spock. Captain Leland seems suspiciously sympathetic when Michael delivers Spock to their ship, promising that Spock won’t be harmed during questioning. Soon enough, Georgiou corners Michael and reveals the truth. Leland plans to use an invasive device to extract Spock’s memories, so it’s time for Michael to kidnap Spock and get the hell out of dodge.

The B-plot takes place near Kaminar, although sadly the crew members didn’t stick around to deal with the chaos they caused last week. Instead, they’re investigating a rift in space and time. “Everything sounds cooler with ‘time’ in front of it,” explains Tilly, advising Pike to avoid getting the “time bends” as he pilots a shuttle into a CGI vortex.

Newly minted Section 31 agent Ash Tyler accompanies Pike into the rift, cementing his role as the only character who Pike visibly dislikes. They have that classic crime show dynamic of a small-town cop (Pike) clashing with an FBI suit (Tyler) who encroaches on his home territory. This week, Tyler argues that Pike selects dangerous missions because he missed out on the action of the Klingon war, something that Pike eventually admits is true. But before that resolution, it’s time for some time travel hijinks.

Weirdly, this episode didn’t use the time vortex to do anything fun. By comparison last year’s time loop episode, “Magic to Make the Sanest Man Go Mad,” was probably my favorite of season 1. (It was also the seventh episode, continuing the trend of mirroring episode themes between the two seasons.) However, “Light and Shadows” just involves Pike and Tyler getting sucked into a time distortion, forcing Stamets to beam into the vortex and rescue them. The most important detail is, like Spock’s arrival, actually a prologue to future episodes.

While stuck in the rift, Pike’s shuttle is attacked by an upgraded version of its own probe, seemingly catapulted back from the future. Now sporting metal tentacles, it hacks the shuttle’s computer and seemingly transfers something to Airiam, the cyborg/robot who serves on Discovery’s bridge crew. Like the helmswomen Owosekun and Detmer, it looks like Airiam will get a bigger role this season. She’s a persistently cool presence in the show, but right now we barely know who (or even what) she is.

While rescuing Spock from Section 31, Michael realizes that the numbers he’s been muttering are actually planetary coordinates. Plugging them into her ship’s computer, she sets a course for Talos IV—the planet that appeared in Star Trek’s unaired pilot episode with Captain Pike, and later in the original series two-parter “The Menagery.” So if you haven’t already watched that, it’s time to head on over to Netflix or CBS All Access before next Thursday.