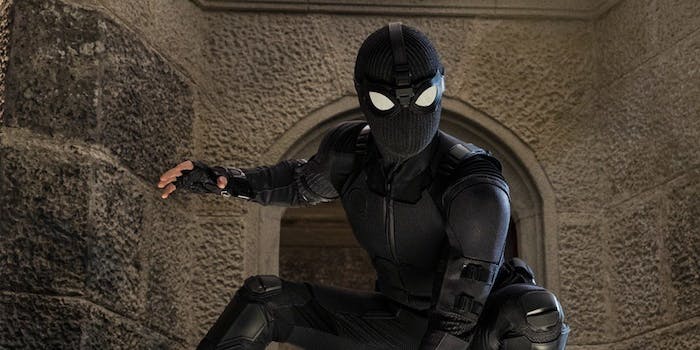 ‘Spider-Man: Far From Home’ is getting a totally unnecessary re-release

These superhero re-releases are taking up valuable screentime.

Spider-Man: Far From Home will return to theaters for an extended re-release, and before we go any further, let’s make one thing clear: Absolutely no one needs this.

Originally released on July 2, Far From Home will return to theaters on Aug. 29, featuring four more minutes of what Variety describes as “a never-before-seen action sequence.” Since it’s now the biggest movie in the Spider-Man franchise (by box office standards, anyway), Sony wants to make the most of its popularity. Disney did something similar with Avengers: Endgame, which was re-released in theaters with some extra material at the end.

Over the past few years, there’s been a growing concern that franchise filmmaking (especially from Disney) has a stranglehold over the film industry. Only one of the top 10 highest-grossing films of 2019 is an original project (Jordan Peele’s Us), while the rest are all franchise sequels and remakes. Disney dominates the market with films like Avengers and The Lion King, and while Spider-Man belongs to Sony, it’s also part of Disney’s MCU. Combine that with rising ticket prices, and you have a market where many viewers only pay to see a handful of films per year, and all of them are studio blockbusters.

We’ve got to the point where there’s a new superhero spinoff or Disney remake practically once a month, overshadowing smaller films. Even if you exclusively watch Marvel films this is bad news, because visionary filmmakers like Taika Waititi can’t hone their craft if indie cinema is being choked to death. That’s what makes this Spider-Man re-release so frustrating.

This isn’t like the recent Matrix re-release, which catered to a sense of nostalgia for a 20-year-old movie. Far From Home has only been out for two months, and while it’s pretty good, it didn’t have a particularly significant cultural impact. Re-releasing it now will just be good for Sony’s profit margins while forcing smaller films to compete for a shrinking number of screens across the country. Following Endgame’s return to theaters (which only existed so Disney could beat Avatar’s box office record), it looks like studios may be testing this as a regular thing for blockbusters with a dedicated fanbase. Let’s hope it doesn’t work out.