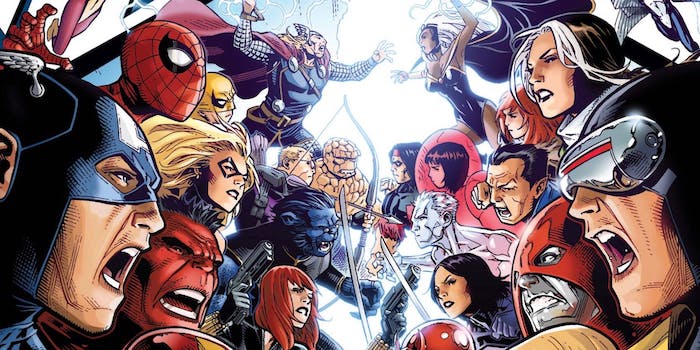 Rumor suggests the X-Men might battle the Avengers on-screen

Take the viral news with a grain of salt.

Marvel Studios announced its Phase 4 slate at San Diego Comic-Con last month, revealing that the Marvel Cinematic Universe is getting weird. But the future contains all sorts of possibilities, including a potential appearance of a legacy group in the MCU.

Officially, we know very little about the Marvel slate after Thor: Love and Thunder, the final film that Marvel announced as being part of Phase 4. At the end of Marvel’s panel, Marvel Studios head Kevin Feige teased Black Panther 2, Captain Marvel 2, Guardians of the Galaxy Vol. 3, Fantastic Four, and revealed that Oscar-winner Mahershala Ali would star in Blade.

“There’s no time left to talk about mutants,” he added.

Feige didn’t cite the X-Men by name, but fans largely took it as Feige confirming that Marvel’s most famous mutants (who already had a long-running franchise at Fox) were joining the MCU fold.

Apart from Blade and likely Guardians of the Galaxy Vol. 3, it’s unclear what Phase 5 of the MCU will look like. But the latest rumor of what future phases might look like suggests that the X-Men will appear in Phase 6—and that a take on Avengers vs. X-Men, the 2012 crossover event where Cyclops turns into Dark Phoenix and the Avengers and X-Men begin to fight one another, is in the works.

There’s little to suggest that this is a sure thing, so be sure to take this with a massive heap of salt. For one, we don’t know when Marvel plans to incorporate the X-Men into the MCU and might have more than enough on its hands with its upcoming slate of movies and Disney+ TV shows.

Disney might also be less willing to adapt a Dark Phoenix-centric story after two failed attempts to nail down that element of the X-Men universe. Earlier this summer, Dark Phoenix, the X-Men film it inherited from Fox after purchasing the studio, was both a critical and commercial failure at the box office. (The first X-Men film to cover Dark Phoenix, X-Men: The Last Stand, was also critically derided.)

And even if Marvel does incorporate the X-Men into Phase 6, they might be better served with their own movie before attempting a major crossover movie event.

But until we have more substantial information, this might be a rumor better left simmering.