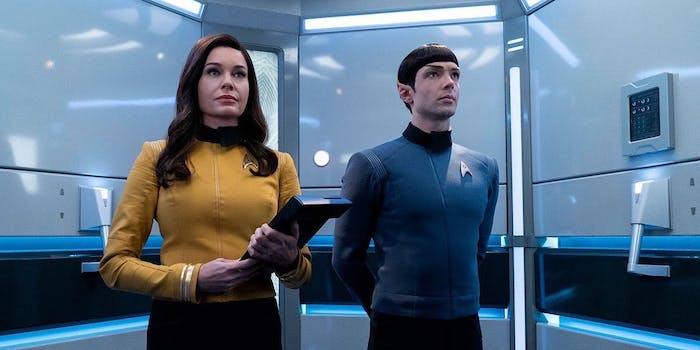 Pike's Enterprise crew will return for their own adventures.

Following the end of Star Trek: Discovery season 2, we thought we’d seen the last of our new Spock, Captain Pike, and Number One. But at San Diego Comic-Con’s Star Trek panel this weekend, CBS revealed the Enterprise crew will return in a new season of “Short Treks,” the 15-minute standalone episodes that began with Discovery spinoffs last year.

The second season of “Short Treks” will be six episodes long. Three episodes feature the Enterprise crew, two are animated episodes (unrelated to the upcoming animated spinoffs), and one is a direct prequel to Star Trek: Picard. Here’s an Enterprise-centric teaser trailer, revealing the titles for all six new episodes.

With Star Trek shifting from 20-episode seasons to a shorter, more serialized and plot-heavy format, the “Short Treks” are an interesting new experiment. They allow more screentime for the offbeat, character-based stories that you’d see as the B-plot in a classic Trek episode. In this case, that means an entire 15-minute short about Spock and Number One getting stuck in a turbolift together. (That one looks especially fun since Discovery hyped up Number One’s role in season 2, but in the end, she was only in a handful of scenes.)

According to Star Trek producer Alex Kurtzman, the Picard minisode “will give you a sense of what happened to Jean-Luc fifteen years before we enter the [new] series.” As for the idea of a full-length spinoff for Pike’s Enterprise crew, Kurtzman said, “We’ll think about it.”

The new “Short Treks” episodes don’t have an airdate yet, but the Enterprise episodes filmed in May 2019. Season 1 released one episode each month between the first and second seasons of Discovery, and since most of the new episodes have no connection to upcoming series, they could arrive anytime between now and the Picard premiere in early 2020.