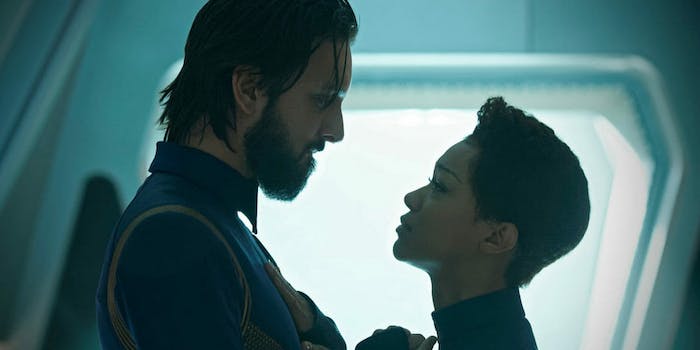 This week's episode hints at a drastic move for the future of 'Star Trek.'

When an episode feels like the set-up for a future storyline, that’s usually a bad thing. Not so for the penultimate episode of season 2, which paves the way for the finale while playing to Discovery’s emotional strengths: stirring speeches, tearful farewells, and Ash Tyler’s romantic pining.

Last week’s cliffhanger saw Pike decide to blow up the U.S.S. Discovery—the only way to stop Control from getting its hands on the archive data. But after evacuating the crew to the Enterprise and setting the ship to self-destruct, the team members learn that the archive won’t die without a fight. Michael has to come up with another solution: Instead of destroying the archive, they’ll remove it from the equation by sending Discovery into the future. The only problem is, it’s a one-way trip. Using their new Time Crystal, Michael will drag the ship through space and time, leaving her friends and family behind.

To prepare the ship before Control’s fleet shows up, the crew enlists help from a surprising source: Queen Po of Xahia (Yadira Guevara-Prip), Tilly’s friend from the Short Trek episode “Runaway.” Po, a teen genius with cool accessories and the confidence to stare down Georgiou, is basically the living definition of a Mary Sue, and yes, I love her.

Setting things up for the finale, this episode was all about goodbyes. Stamets told Culber that he’s ready to move on (LIES), Sarek and Amanda showed up to bid Michael farewell, and Michael told the whole crew she loved them. Except then, her friends announced they wouldn’t let her go alone after all. While Pike and the Enterprise stay behind to fight Control, Michael’s friends (and Spock!) will travel with her to the future. Well, everyone except Ash Tyler, who chose to stay behind for Secret Reasons.

Ash and Michael’s relationship is one of those situations where I wish Discovery would slow down and give us more time to digest. It’s a tormented romance with plenty of deliciously agonized pining from Shazad Latif, who plays Ash, but the whole thing is crammed into a handful of scenes. Ash is a cross between Mr. Darcy, a Cold War spy, and a hair model. He’s a tragic Arthurian knight, torn between love and duty. He and Michael are absolute champions at smoldering silently at each other, and it’s hard to believe this is the end of their story. If Ash really is leaving after this, then someone needs to cast Latif in a Regency romance, stat.

Is Star Trek: Discovery seriously going to Go There?

When Michael was the only person on this one-way trip, it seemed obvious that Discovery would return to the status quo by the end of the season. Jettisoning the entire supporting cast would be truly wild move, especially when you know that CBS rejected Bryan Fuller’s initial pitch to have Discovery cover multiple crews throughout the Star Trek timeline. But if the main crew is going with Michael, then it’s entirely plausible that season 3 will take place in the future. In fact, I’ll be rather disappointed if they don’t pull the trigger next week.

By sending Discovery to the future, the show ties up all the nagging questions about its place in Star Trek canon. If they find a way to drop Spock back into the main timeline, we’re left with a totally reasonable crew for season 3: Michael, Saru, Stamets, Tilly, Jett Reno, and a handful of secondary officers. What’s more, we’ve spent a whole season tying up lingering issues like Saru’s backstory, Stamets’ love life, and Michael’s relationship with her parents. Narratively speaking, they’re ready to go on a one-way journey to parts unknown.

The final nail in the coffin is that this episode practically felt like a reunion tour. Recurring characters like Cornwell, Georgiou, Sarek, and Amanda all showed up to say goodbye, despite being virtually irrelevant to the plot. We already knew that Pike and Number One are only around for one season, and with Georgiou getting her own show, I won’t be surprised if Michael’s crew leaves everyone else behind for season 3.