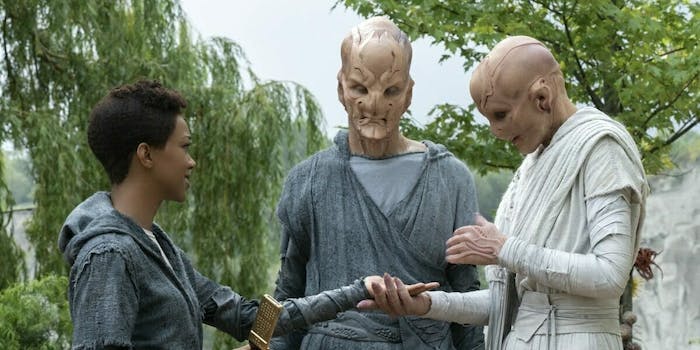 'The Sounds of Thunder' features commentary about colonialism and oppression.

The Prime Directive, Starfleet’s longstanding non-interference policy, is a safeguard against Federation overreach. Numerous episodes debate whether to interfere with a pre-warp civilization and after “An Obol for Charon,” we knew Saru would soon face this dilemma with his own homeworld. “The Sounds of Thunder” sees Discovery follow a Red Angel signal to Kaminar, forcing Saru to choose between Federation law and protecting his people.

This was a high concept episode with plenty to say about colonialism and power—not to mention another stellar performance from Doug Jones.

As the only Kelpien in Starfleet, Saru is a refugee whose culture and biology are barely understood by his fellow officers. He fled Kaminar to escape the traditional Kelpien fate of being harvested by their predator species, the Ba’ul—a tradition that most Kelpiens revere, but Saru saw for what it was: murder.

For 18 years, Saru accepted that he can’t interfere in his homeworld’s development. But after “An Obol for Charon,” he knows that Kelpiens are living a lie. He survived vahar’ai, a process that Kelpiens believe is a terminal disease but is actually more like puberty. It freed Saru from the fear instincts that dominate Kelpien life, making him more confident and aggressive.

Star Trek loves to make big speeches about peace and tolerance, so I was glad to see this episode go in a more critical direction. The strongest moments involved Saru clashing with Starfleet, shifting Pike’s role from lovable dad to a white male authority figure. You can understand why the Prime Directive exists (Starfleet shouldn’t interfere with random cultures they just met), but this story showed why non-interference isn’t necessarily a neutral choice.

Ordering Saru to step aside and be quiet, Pike positions himself as a rational observer to the conflict on Kaminar. When Saru angrily refers to the Ba’ul as oppressors, Pike implies that Saru’s biological changes are making him too emotionally volatile. It’s a clear parable about privileged leaders policing the behavior of oppressed groups. In the end, Saru only gets to visit Kaminar because Michael requests his help. Pike prefers to trust Michael, a human xenoanthropoligist with minimal knowledge of Kaminar, over Saru, a Kelpien expert with personal biases.

The Kaminar scenes make more sense if you saw Saru’s Short Trek episode “The Brightest Star,” so hopefully you did that already. Eighteen years on, his sister Siranna (Hannah Spear) is overjoyed to see Saru return, and understandably pissed that he only came back to investigate the Red Angels.

Unfortunately, Saru inspires an aggressive response from the Ba’ul, who tell Discovery to hand Saru over or they’ll destroy his village. Pike won’t let an officer go without a fight, but Saru takes matters into his own hands and surrenders himself to the Ba’ul.

Up until now, we knew virtually nothing about the Ba’ul. Described by Starfleet as hostile and isolationist, they hide behind high-tech spaceships and a propagandic religious presence in Kelpien culture. For a while I was worried they’d turn out to be the evolved form of Saru’s post-vahar’ai state, but they are indeed a separate species. And their on-screen reveal is, visually speaking, very cool.

Imprisoned in a Ba’ul structure, Saru and Siranna watch helplessly as a Ba’ul rises from a pool of liquid. Red-eyed and vaguely insectoid, it’s super creepy and menacing, delivering a speech that coincides with something Airiam just found out onboard Discovery: Thousands of years ago, Kelpiens were the dominant species and Ba’ul were the prey. To defeat them, the Ba’ul curtailed Kelpien development by stopping them from completing vahar’ai. And so the Ba’ul evolved into a violent, warp-capable civilization while the Kelpiens became a peaceful agrarian prey species.

As expected, the situation on Kaminar is more complicated than it initially appeared. But after offering a nuanced look at the power imbalance between Starfleet and Kaminar’s two civilizations, the story accelerates to an ambitiously wild conclusion. Using the same signal that caused Saru’s vahar’ai, Discovery triggers the vahar’ai of every Kelpien on the planet, hoping to put them on equal footing to the Ba’ul. The Ba’ul predictably respond with genocidal violence, at which point a Red Angel intervenes and deactivates their weapons. Now we have three advanced lifeforms interfering with Kelpien culture, with the Starfleet characters conveniently forgetting the Prime Directive.

We obviously side with the Kelpiens here, and I sympathize with the difficulty of wrapping up a complex story in 50 minutes. Still, it’s hard to ignore the potential fallout. By triggering everyone’s vahar’ai, Saru made a unilateral decision to change an entire species and planetary ecosystem, likely precipitating a war. Meanwhile, Pike broke Starfleet’s cardinal rule, making a drastic impact on a pre-warp race without asking their permission or even explaining what’s going on. So it’s a happy ending in the sense that Kelpiens are no longer ruled by fear, but otherwise, Discovery just showed up, caused planet-wide chaos, and then jetted off without any further input.

“The Sounds of Thunder” didn’t have a major B-plot, which was a welcome change after some slightly overstuffed episodes. Instead, we got another Red Angel check-in (whatever) and our first look at Hugh Culber’s recovery.

Respawned in a “pristine” new body, Culber is medically fine but emotionally messed-up by his time in the mycelial network. Stamets seems to be in denial about his boyfriend’s very blatant trauma, which makes sense because he’s so glad to have Culber back. However, Dr. Pollard‘s attitude is harder to understand. She’s basically like, “Congrats on your new body!” Meanwhile, Culber may as well be wearing a shirt that reads “I NEED THERAPY.”