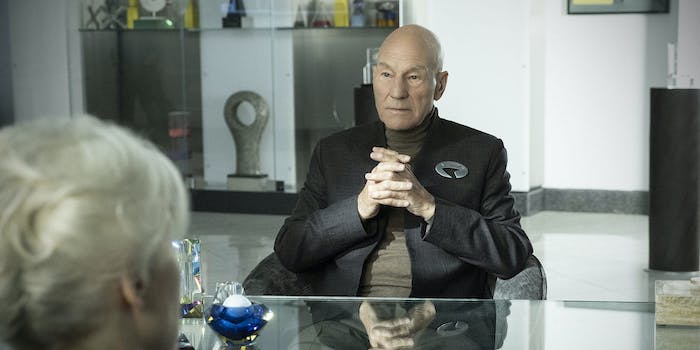 Picard's Comic-Con panel dropped a ton of exciting revelations, including the return of Riker, Data, and Seven of Nine.

Patrick Stewart blew Star Trek fandom’s mind in 2018, surprising us with the revelation that Jean-Luc Picard will return for a new show.

For many fans, Star Trek: Picard on CBS All Access is the most exciting Star Trek news in years. We’re keeping track of every new piece of info on this project, including the new trailer and revelations from San Diego Comic-Con. Namely, how on earth did CBS manage to keep a lid on the fact that this show includes Data, Seven of Nine, Riker, and Troi?

Here’s the first full-length trailer, introducing an elderly Picard and his new crew, in an era of Star Trek we’ve never seen before.

In the lead up to Picard‘s panel at San Diego Comic Con, CBS released a new poster for the show, revealing that Picard has a dog! Seemingly a pitbull, its nametag reads “No. 1,” the nickname typically given to the first officer on a Starfleet ship – which in Picard’s case was Riker.

Executive producer Heather Kadin confirmed at New York Comic Con that CBS plans for the show to run for multiple seasons, not just a one-off. The writers’ room started working on the scripts in September 2018. The show began filming in April 2019.

In a January 2019 interview with The Hollywood Reporter, Star Trek producer Alex Kurtzman said that this version of Picard has been “radically altered by the dissolution of the Romulan Empire.” This sets up a canonically complex starting point for the series, aimed squarely at longtime fans. Not only does it tie into the deep role of Romulan politics in The Next Generation, but it’s explicitly connected to J.J. Abrams’ Star Trek prequel movies, which began with the timeline-altering destruction of the Romulan homeworld. (Romulus was destroyed in 2387, eight years after the last Next Generation movie, sending an elderly Spock 130 years into the past, and creating the divergent timeline of the recent Star Trek movies.)

Kurtzman said that Stewart is fully onboard with this ambitious premise, adding that Stewart said, “If we do this, I want it to be so different, I want it to be both what people remember but also not what they’re expecting at all, otherwise why do it?” The writing team’s initial pitch document was a full 34 pages long.

Thanks to the San Diego Comic Con trailer, we now know that Data’s death had a lasting impact on Picard, and although Picard is now retired, he’s conflicted about that decision. The main plot has something to do with the Borg and a mysterious young woman played by Isa Briones, who seemingly triggers Picard’s return.

The show’s announcement focused on the role of writer/producer Alex Kurtzman, one of the minds behind the recent Star Trek reboot movies, and the co-creator (and recent replacement showrunner) of Star Trek: Discovery. CBS All Access hired him to oversee a raft of new Star Trek spinoffs, with Picard as the first confirmed announcement. However, Kurtzman is not the day-to-day showrunner—he’s just the best-known name. He’s Star Trek‘s equivalent of the Marvel franchise overseer Kevin Feige.

While Kurtzman previously said the show would proceed with just a writing team instead of a traditional showrunner, CBS announced on June 27 that Michael Chabon had been promoted to showrunner – two months into filming. Best known as a novelist, Chabon previously wrote a short Discovery spinoff episode, and was a member of Picard‘s writing team, but has no previous TV experience, making him a rather surprising choice to take charge.

Alongside Stewart, the show’s main cast includes Santiago Cabrera as Cristobal Rios (a thief, and also the pilot of Picard’s new ship), Alison Pill as a doctor called Agnes Jurati, Harry Treadaway as Narek, Michelle Hurd as a former spy called Raffi Musiker, and Isa Briones as Dahj. We also have several beloved characters returning from other Star Trek shows.

The show’s first teaser arrived in May 2019, revealing Picard’s retirement in his family’s French vineyard.

Where will Star Trek: Picard air?

U.S. viewers can watch the Picard show on CBS All Access, along with any other upcoming Star Trek spinoffs. Like Discovery, it will air elsewhere internationally; although unlike Discovery, it won’t be on Netflix. Instead, Amazon has snapped up the rights to air the Picard spinoff outside the U.S.