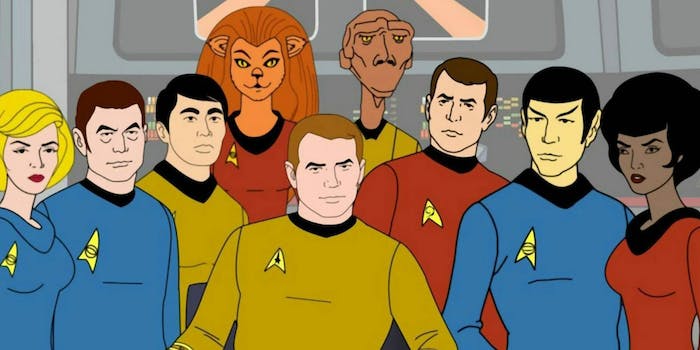 Along with the animated comedy 'Below Decks,' CBS just announced an animated 'Star Trek' show for kids.

Producer Alex Kurtzman told the Hollywood Reporter this week that there are two more animated projects on the way: Animated Short Treks in the same vein as the live-action shorts we saw last year, and a kid-friendly cartoon series. While Lower Decks will be a comedy from Rick and Morty writer Mike McMahon, this new series will have a family-friendly tone in line with Star Wars animated shows like Rebels. In fact, Kurtzman actually namechecked Star Wars as a key influence.

“I go back to my childhood and Luke Skywalker, the farm boy who looks out at the twin suns of Tatooine and imagines his future. Trek never gave me that. Trek was always fully formed adults, already in Starfleet and people who have decided who they are. And it never was aspirational that way… It’s important to me to find a way to go back and reach younger kids in a way that Trek should and never really has.”

This description may not go down especially well with many Trek fans. It can be a little galling when creators like Kurtzman and former Trek director J.J. Abrams call back to Star Wars like this because the two franchises offer fundamentally different things. Just because Kurtzman doesn’t feel nostalgia for Star Trek doesn’t mean it isn’t popular with kids. Plenty of fans got into Trek at a young age, especially these days when parents introduce their kids to older shows at a young age. Basically, Star Trek doesn’t need to be more like Star Wars in order to succeed.

That being said, it will be cool to see more kid-friendly content in the new era of the franchise. Discovery is more adult-rated than any previous Trek series, and the Picard show sounds like it may be geared toward older viewers who are already familiar with the canon.