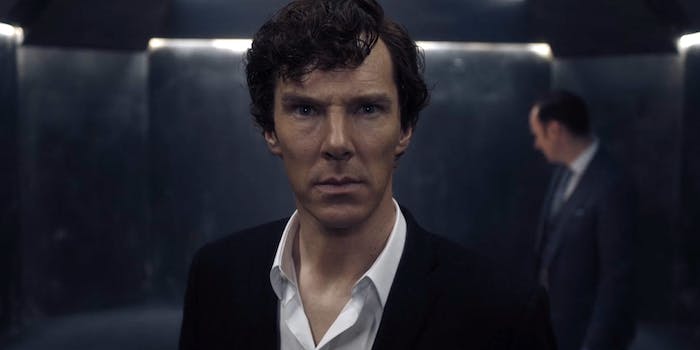 A lot of this episode made no sense, but it was certainly the most fun we've had in season 4.

Warning: This review includes spoilers for “The Final Problem.”

For a show about an accomplished logician, Sherlock rarely makes much sense—although in the better episodes, that doesn’t actually matter. The first 20 minutes of “The Final Problem” felt like a return to form, with smart, entertaining action replacing the surreal montages and over-abundant plot twists of the last two episodes. Then everything got sidetracked by an unintentional act of self-sabotage: the showrunners’ unquenchable desire to ramp up the stakes yet again.

It didn’t help that this was the most sexist episode to date, in a show that already set a very low bar for its female characters.

Sherlock’s latest antagonist is his sister Eurus (Sian Brooke), who was previously erased from his childhood memories, and who spent the past two episodes secretly toying with him from a distance. As we discussed in last week’s review, Eurus falls into a very familiar archetype for female characters in Sherlock: a hyper-competent woman who is supposedly much smarter than the male heroes, yet will inevitably be defeated by Sherlock’s deductive skills.

While Sherlock and Mycroft Holmes exist within a vaguely plausible spectrum of human intelligence, their sister is essentially an X-Men villain. Her intellectual powers are tantamount to magic, including the ability to hypnotize the entire staff of a high-security prison. In a fascinating example of Sherlock being more Victorian than its Victorian origins, she also ticks every box for the kind of madwoman who gets locked up in an asylum in a 19th century melodrama: pale skin, unkempt hair, unpleasant sexual appetites (she’s implied to have raped and mutilated a prison guard), unspecified mental illness, and hints of supernatural powers. And, of course, all her crimes were motivated by a desire for male attention. 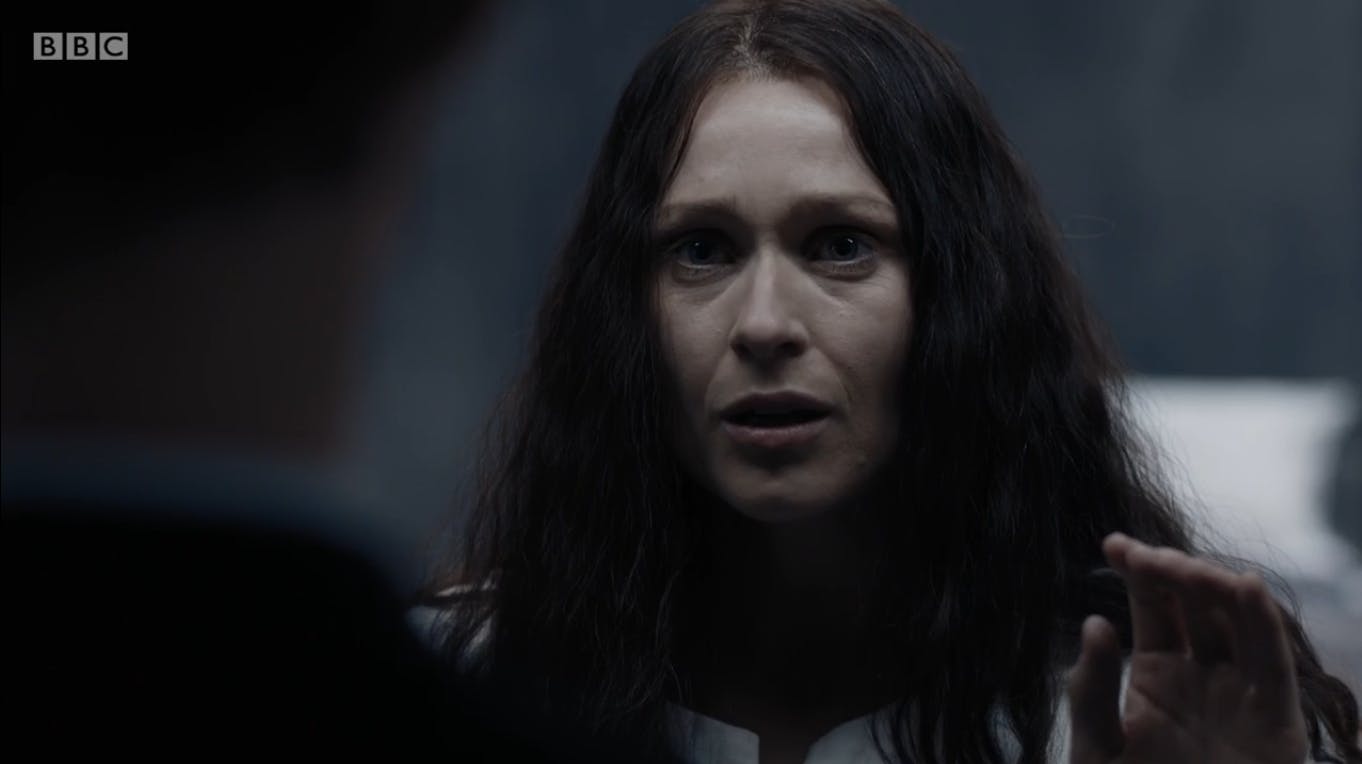 After 20 years in her secret island prison, Eurus escapes by turning the guards into her own private army—before returning so she can transform the prison into a kind of deadly puzzle game for Sherlock. Because as always, everything revolves around Sherlock. (In this case, you’d think Eurus would have more reason to fixate on Mycroft, the man who imprisoned her for decades without trial.)

Despite all this, “The Final Problem” was easily the most entertaining episode in season 4. Andrew Scott returned for a brief but very welcome cameo as Moriarty, the one Sherlock character who always seems to be having fun. John and Sherlock stopped having emotionally fraught arguments, and Sherlock was considerably less of an asshole—although this particular piece of character development must have happened offscreen. The problems only began after John, Sherlock and Mycroft broken into the prison, where we’re treated to an overly long sequence of morbid Crystal Maze-style challenges orchestrated by Eurus. Like last week’s episode, this all relied on Sherlock simultaneously being a genius and an unobservant idiot. Let’s take a look at some of the details revealed by Eurus’s sadistic puzzles:

Even by Sherlock standards, this is… a lot. The episode might have been improved by cutting some of Eurus’ puzzles, which mostly revolved around supervillainous moral dilemmas: Kill your best friend, or kill your brother? Murder this man, or allow his wife to die? This involved Sherlock both endangering and attempting to rescue every single female character in the episode, with the exception of a very minor cameo from his mother. Mrs Hudson almost gets blown up. The prison governor’s wife gets shot. Tragic spinster Molly is manipulated into crying over the phone while Sherlock lies, “I love you,” in an utterly manufactured moment of conflict. Even Eurus gets rescued, in the end. 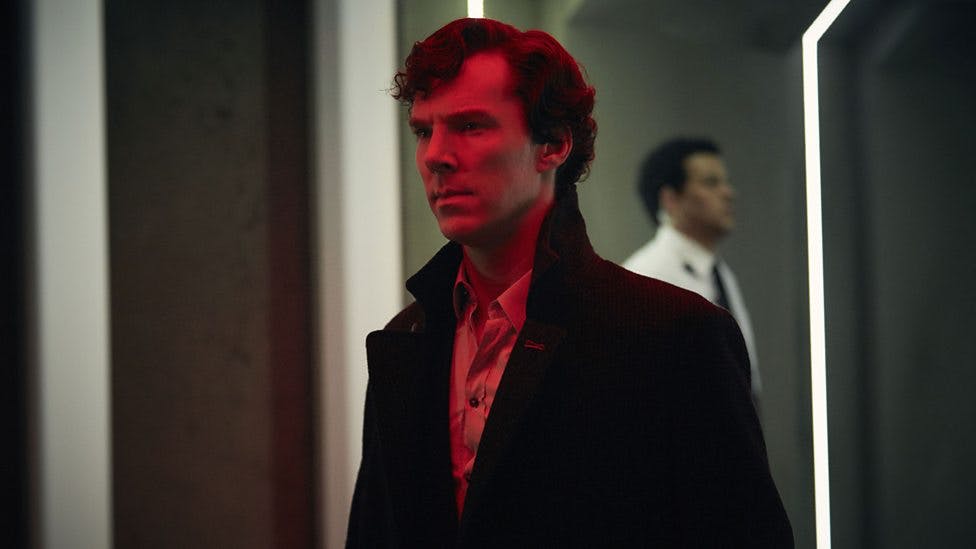 After hours of enigmatic phone calls, the girl on the plane is revealed to be Eurus in disguise (again), and Sherlock “saves” her by realizing the crashing plane was really a metaphor for Eurus’ mental state. At heart she’s just a scared little girl flying above everyone else, and she needs Sherlock’s help to land. Sherlock even congratulates her on the genius of the metaphor, which basically amounts to the writers congratulating themselves.

Even if you ignore the dire gender roles of this scenario, this revelation creates an obvious plot hole in the pre-credits scene, when the girl speaks to Moriarty on the plane. If the girl only “exists” as a voice on the phone to Sherlock, then that scene makes no sense in context. It’s nowhere near as tightly written as Sherlock‘s last plane crash fakeout, which involved a real plane full of frozen corpses.

“The Final Problem” ends on a rather puzzling note. Eurus returns to her jail cell, which feels like a serious tactical error considering what happened last time. Then Mary Watson delivers heartfelt sendoff from beyond the grave, in a video message that sounds exactly like a TV drama voiceover but nothing like a real message someone might record for their husband. With a montage flashing forward to John and Sherlock raising John’s baby in Baker Street, we get a rare moment of closure compared to the cliffhangers of previous seasons. Yes, this could indeed be the last episode ever. But does John and Sherlock’s happiness feel earned?

After two episodes of conflict and trauma, this domestic bliss comes out of nowhere. We never really saw the character development that created this newly sensitive, affectionate version of Sherlock, and John’s grief basically vanished between episodes two and three. As ever, the world of Sherlock rearranged itself to the convenience of the writers’ demands, regardless of logic, characterization, or narrative sense.