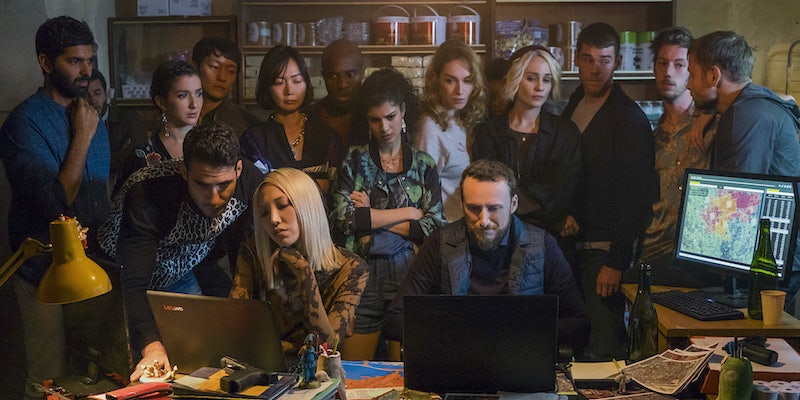 The cult Netflix series lands the plane in its one-off finale.

Clocking in at 150 minutes, the Sense8 finale is ridiculous, indulgent, and packed with eyebrow-raisingly ambitious new background lore. In other words, a perfectly tuned gift for Sense8′s adoring fanbase. After canceling the show last year, Netflix hastily capitulated to audience demand and revived it for a final one-off episode. While it inevitably leaves a few loose ends, it wraps up the elements we actually care about.

Starting where season 2 left off, we dive straight into the thick of Sense8‘s ongoing story. So if for some inexplicable reason you decide to watch this as a standalone movie, prepare to be confused. In summary: Wolfgang has been kidnapped, Daryl Hannah keeps reappearing as a psychic dream ghost, and there are at least two international conspiracies vying for power behind the scenes.

Fortunately, you don’t really need to remember precise plot details. Sense8 is more about feelings and atmosphere, interspersed with trademark Wachowski info-dumps. Suffice it to say that our photogenic cast is now on the run together in Europe, living the kind of communal superhero team/BFF-squad lifestyle we hoped to see when they were strangers in season 1. Their escapades combine excellent fight choreography with unabashed tropiness, featuring fraught hostage exchanges and heists in glamorous locations.

Sense8 is the closest TV equivalent to a gloriously self-indulgent fanfic. I don’t mean that disparagingly (because goodness knows some fanfics have better dialogue), but because it provides the same gluttonous overdose of emotional satisfaction. While battling the sensate-kidnapping organization BPO, our heroes become a queer utopia unto themselves. Directed by Lana Wachowski, who co-wrote with Cloud Atlas novelist David Mitchell and author/journalist Aleksandar Hemon, the experience hints at total creative freedom. In the same way that Twin Peaks: The Return allowed David Lynch to do whatever he wanted, both good and bad, Sense8′s last episode celebrates the Wachowski vision in all its hokiness.

The two complete seasons introduced a conflict between the sensates and their would-be kidnappers BPO. This thriller storyline provided the framework for what most viewers are actually interested in: The relationship between the eight telepathically connected protagonists. In turn, this conceit is a platform for the show’s central theme, an optimistic view that love and connection can solve the world’s problems. This was hampered by an occasionally clumsy attitude to race in earlier episodes, but Sense8 always flourished in its depiction of queerness and non-traditional family. The finale embraces that idea with an open heart.

In the spectrum of well-conceived queer representation on TV, imagine Supergirl at one end. Playing to a mainstream family audience on CBS, its lesbian character had a significant impact. For some viewers, Alex Danvers’ coming-out story was their first time seeing a gay character in a lead role. It was a teachable moment, starring a law enforcement agent surrounded by naive but supportive straight friends.

Then at the other end of the scale, Sense8 is the galaxy brain of queer media. Like Black Sails, it depicts queerness through a variety of viewpoints. It tells stories about romantic love and self-discovery but also explores the political choice to dismantle heteronormative expectations. The eight sensates share a collective journey that ends with them finding a new, better way to live. A way that involves polyamory and a ride-or-die attitude to platonic friendship, abandoning the restrictions of their previous lives. It’s both a free and joyful choice and a response to being hounded by patriarchal oppressors.

The “found family” trope was integral to shows like Buffy and Community, building emotional bonds outside the traditional nuclear family. Yet these shows mostly focus on straight people, ignoring the reality of queer communities that form out of shared experience. In that sense, Sense8 has more in common with Queer as Folk or Tales of the City than with its sci-fi counterparts. And while it’s full of conflict and violence, it’s also a source of relentless wish-fulfillment. We see lengthy montages dedicated to the simple concept of people enjoying each other’s company. The main characters are almost embarrassingly open with each other, and everyone gets a romance subplot. Perhaps most importantly, they’re safe. Despite all the mortal peril, we can be sure that Sense8 won’t follow the “bury your gays” trend. Contrasting with the mask-wearing villains in sterile laboratories, the heroes celebrate with feasts, orgies, and dance parties. They advocate for shameless intimacy as a way of life.

With a decent balance of screentime between the leads and their assorted hangers-on, this episode provides a satisfying ending for the fans. Lana Wachowski and her co-writers kept introducing more worldbuilding details until the bitter end, but what else would you expect? It’s a glimpse of what might have happened in season 3, and while the conclusion is unavoidably rushed, it gives us the emotional closure we need.