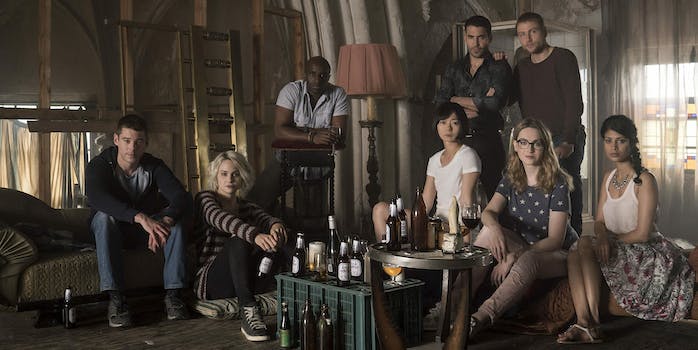 Fans are worried that Netflix will cancel 'Sense8' like it did with 'The Get Down.'

Netflix just canceled The Get Down and now Sense8 fans are worried the same thing will happen to their show. Both are expensive dramas from famous filmmakers (Baz Luhrmann and the Wachowskis, respectively), but they still have lower profiles than Netflix hits like Orange is the New Black and Stranger Things.

Sense8 has a cult following, with fans praising its diverse casting choices, trippy sci-fi concept, and themes of unity and friendship across cultural divides. However, “cult following” doesn’t always translate to a large viewership. Season 2 reputedly cost $9 million per episode, so it needs a big audience to earn a third season.

Review: Sense8 finds its feet as a lively sci-fi thriller in season 2

To remind Netflix of their dedication, Sense8 fans have launched every TV fandom’s favorite strategy: a hashtag campaign. #RenewSense8 is now trending worldwide on Twitter, and maybe someone at Netflix is paying attention.

Art is love made public, and Sense8 is the biggest labor of and appreciation of love I've ever seen. #RenewSense8 pic.twitter.com/COmDhHasK5

Deadline reported in March that Netflix is renegotiating deals with Sense8′s main cast, after their original contracts ran out. That doesn’t necessarily guarantee a third season, but it does mean Netflix wants them to be available, just in case. According to a recent interview with producer Roberto Malerba, Lana Wachowski is already working on the scripts for season 3, which Malerba believes would be the show’s last.