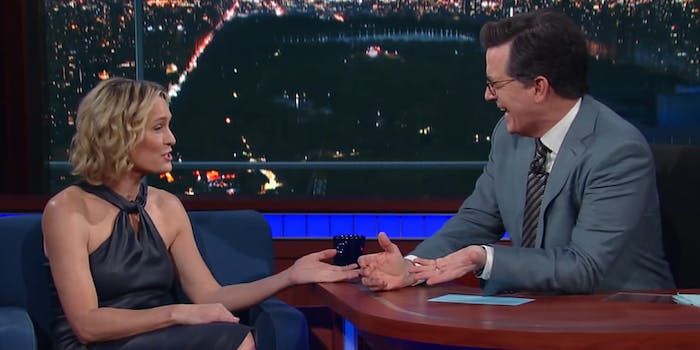 It makes a big impact.

Much has been said about the impact female-led movies like Wonder Woman—the first female superhero movie to be released in years—will have on young girls, but one of the film’s stars is apt to remind us who else the film should have an impact on.

Robin Wright, who plays Diana’s aunt and trainer, General Antiope, in Wonder Woman, appeared on The Late Show to chat with Stephen Colbert Wednesday night. After watching a clip of Antiope’s fighting, Colbert was in awe and mentioned how great it was for girls to be able to see Wonder Woman and the Amazonian warriors on screen.

“This is exciting,” Colbert told Wright. “We’ve got a movie now where little girls can look up and see, you know, female superheroes for the first time in a movie theater. Taking nothing away from Black Widow, but pretty extraordinary.”

It’s a quieter moment in the grand scheme of things, and you can see Wright pause just a moment before she said it. And it doesn’t get mentioned again for the rest of the interview, which covers everything from Wonder Woman and House of Cards to the short film she directed. But it didn’t really faze Colbert all that much, who ended up agreeing with Wright.

“And little boys, of course,” Colbert said. “I’d love to be able to do what [Antiope] does in there.”

Colbert’s original point, that seeing Wonder Woman on a movie screen will have an impact for many young girls is true. It’s the first female-led comic book movie since Elektra, which was poorly received and flopped. Before that was Catwoman, a movie that also performed poorly at the box office. Neither of those were good movies, but the complete lack of female-led films until now led some to believe that movie executives felt that those films failed because nobody wanted to see a female superhero movie (and not because they were, you know, bad).

Fears that Wonder Woman would fall victim to a self-fulfilling prophecy from Warner Bros. were still on the surface for some fans in the lead up to the movie, as they pointed to the then-lack of marketing. While initial reactions to Wonder Woman have been overwhelmingly positive, so much had been riding on the movie (not just as a female superhero movie but also the next film in a DC Comics lineup that’s been largely panned so far) that the reveal of positive reviews felt like a huge relief more than something to celebrate. (“Thank god it’s good,” basically.)

Even though Hollywood has been better about putting complex and layered female characters at the forefront of blockbuster films, it still happens so infrequently that it’s still seen a big deal—and something many women wish they could’ve had when they grew up. Rey is the Force-sensitive hero many girls and women have been waiting for. Jyn Erso transferred the Death Star plans that made it possible to finally blow up the Empire’s superweapon. Supergirl and Jessica Jones both made ways on television, as did Agent Carter before its cancellation. Star Trek: Discovery is led by women of color.

But it’s still not great. We have Black Widow and the Scarlet Witch in the Marvel Cinematic Universe, but we had to wait 20 films before we finally got one led by a woman—and that’s assuming Captain Marvel doesn’t get delayed a third time to fit another movie into its packed schedule. The two female-led superhero TV shows are often pitted against one another despite the fact there’s plenty of room for both of them. We’ve seen 10 iterations of Batman, more than half a dozen actors play Superman, but it took until 2017 for Wonder Woman to get her own film (and it’s been decades since Lynda Carter brought her to life on TV). The notion that one in decades is enough or that making genre movies about people other than white men is political correctness gone awry persists among parts of geek culture.

And that doesn’t even cover the lack of diversity in most of these films. They’re overwhelmingly white—with many people of color in just secondary or minor roles—and it won’t be until 2018 when we get Black Panther, the first black superhero film of the MCU or DC Expanded Universe.

Characters like Wonder Woman are just as worth rooting for, and in movie universes where superpowers and the Force exist, the idea that boys can relate to strong and powerful women shouldn’t still be considered a fantasy.

We can hope that Wonder Woman’s likely box office success jumpstarts the push for more female superheroes. On a cultural level, with boys and girls alike, we’ve already seen the cultural impact over and over again.