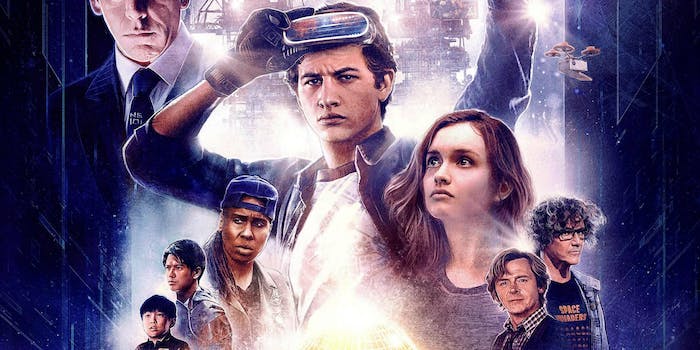 Why the internet is so ready to hate ‘Ready Player One’

It combines toxic fanboy culture with a tiresome desire to repeat the past.

Ready Player One could be the most hated movie of 2018. Considering the fact that it’s a Spielberg film with relatively respectable reviews, that’s quite an achievement. But like Fifty Shades of Grey, the movie is based on a bestselling book that lends itself well to embarrassing viral quotes. Ready Player One has come to represent a certain kind of toxic fanboy mentality, and no amount of positive reviews can change that now.

Written by avowed fanboy Ernest Cline, it’s a futuristic adventure about a young man who competes in a virtual reality game where players win by gathering expertise about 1980s pop culture. The book was a smash hit, but over the years it has attracted a growing backlash. The criticism focused on two issues: its celebration of geek nostalgia over substance, and its persistent sexism. (In the vein of so many adventure stories about dweeby young men, the female lead is a prize to be won.) It didn’t help that Cline seemed to personify his own work, driving a replica DeLorean and posting creepy “nice guy” screeds on his blog.

By the time the trailer came out last year, the Twitter tide had fully turned against the film. It was met with mockery and scorn—the kind of contempt that only happens when something hits close to home. Non-nerds have no reason to feel strongly about Ready Player One. When people express derision toward this movie, it’s because it reflects something embarrassing and distasteful about our own fandom landscape.

Ready Player One is a 2-hour powerpoint presentation about some guy's Funko Pop collection.

Ten years ago, Ready Player One might not have earned such ire. That was before we’d suffered through a glut of referential pop culture, best exemplified by Big Bang Theory. For 11 seasons, Big Bang Theory championed the idea that geeky references can replace actual humor and personality. It celebrates a brand of fandom where men deride women as “fake geek girls,” making themselves the gatekeepers of some artificial nerd hierarchy. Some of Ready Player One’s most infamous passages reflect this phenomenon, where the hero defines his entire identity by his ability to appreciate Back to the Future or Pac-Man.

You say you’re ready for READY PLAYER ONE. And perhaps you are.

But are you ready for the 2 hours of knowing grunts that your fellow audience members will emit so performatively, every time they spot a reference?

The novel was published in 2011, just on the cusp of the reboot revolution. J.J. Abrams‘ Star Trek had already come out, with The Force Awakens, Jurassic World, Man of Steel and numerous others on the way. They fed into the culture wars brewing online, where certain (primarily white and male) fans would erupt in fury when any reboot dared to stray from the source material. The ones that inspired the greatest anger were those that welcomed a more diverse audience: Ghostbusters and The Last Jedi.

Tellingly, two movies this audience celebrated for their “originality” were Deadpool and Guardians of the Galaxy. Both felt fresh compared to, say, Ant-Man, but they also relied heavily on pop culture references. Both star 30-something white guys with a middle school sense of humor, and Guardians of the Galaxy wouldn’t stay upright without its soundtrack of 1980s pop. They press the same button to give us the dopamine kick of comfortable familiarity.

In fairness, it’s annoying when a vocal crowd of people openly hate something you love—especially when they haven’t even seen it. But Ready Player One’s quality is almost irrelevant to the backlash. Opponents are going after its basic concept, because it’s such a perfect illustration of toxic fanboy culture and its obsession with masturbatory trivia. It simultaneously caters to the idea that white male nerds are underdog heroes while proving that they’re actually a dominant force in Hollywood. That’s why so many people are bringing up Jupiter Ascending as a point of comparison.

Where Ready Player One’s target audience is the cast of Big Bang Theory, Jupiter Ascending aimed itself at women who grew up on Disney Princesses and fanfiction. As a more feminine version of The Matrix or Star Wars, it’s a self-indulgent fantasy where the heroine becomes a space princess and falls in love with werewolf Channing Tatum. Critically derided and poorly marketed by the studio, it developed a cult following because its audience actually doesn’t get much attention from Hollywood. Meanwhile, lazy, forgettable reboots like Jurassic World get a free pass, because nostalgia outweighs the need for a thoughtful concept or, you know, a decent attitude toward women.

We’ve reached a point where, when an actor or director breaks through to the big leagues, people immediately start speculating which superhero franchise they’ll make. There’s a thirst for new material based on old sources, which occasionally results in something genuinely fresh (Black Panther) but mostly toes the line of “new, but not too new.” Ready Player One is the peak example, with Spielberg helming an “original” story that relies wholly on pop-culture retreads. A very specific type of pop-culture retread, because while the novel is heartily obsessed with the 1980s, it never mentions rap. Like Stranger Things, Guardians of the Galaxy, and the Adam Sandler movie Pixels, its archetypal audience is a white guy member of the original Ghostbusters generation.

This isn’t contemporary nerd culture. It isn’t contemporary anything. For a look at what shaped the counterculture nerd landscape today, you need to understand fanfic, Homestuck, and the rise of 4chan. Perhaps fortunately, this isn’t something Hollywood has managed to monetize. Yet.