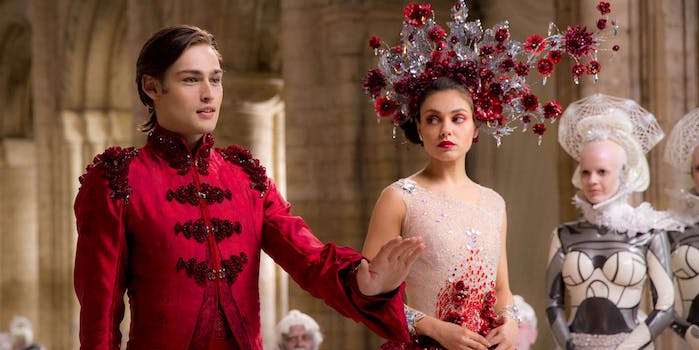 For many women, 'Jupiter Ascending' is the blockbuster they've been wanting for years.

Recently, Hollywood proved once again that it just does not understand women. This proof came in the form of a trashy blockbuster that struck a chord with women, though it was widely derided by critics for its weird concept and laughable dialogue. And no, I’m not talking about Fifty Shades of Grey. 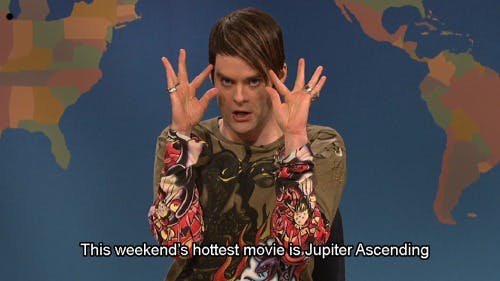 Jupiter Ascending is a box-office flop, in part because it was pushed back from summer 2014 to February, the elephant’s graveyard of abandoned blockbusters. But in certain corners of the Internet, it has already been crowned the Best Movie Ever. Or at least, the Best Movie Ever of early 2015.

Basically, this movie turned out to be catnip for a certain subset of geeky, self-aware young women, which is why it’s going to enjoy a long life as a staple of boozy sleepovers and costumed indie theater screenings. There is no better illustration of this phenomenon than this Three Wolf Moon t-shirt, which depicts Channing Tatum‘s Jupiter Ascending werewolf character as all three of the wolves. What a work of art. 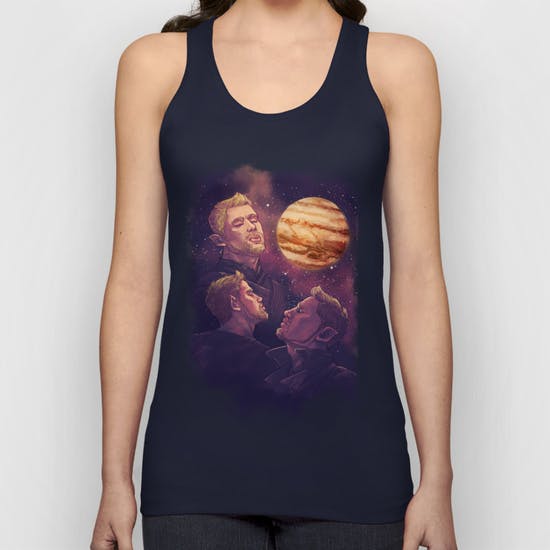 “I feel like a raccoon that jumped into a dumpster and found everything it loved,” writes one Tumblr user.

“Is this how straight dudes feel at the movies all the time????” writes another. “Like someone carefully noted down your early pubescent fantasies and then threw 100 MILLION DOLLARS at them?”

Jupiter Ascending features talking dinosaurs, shirtless Channing Tatum being chased around on flying rollerblades, fleets of bedazzled spaceships, jokes about feminine hygiene products, and a scene where Mila Kunis looks soulfully into the eyes of a werewolf and says, “I’ve always loved dogs.” It is dumb, and weird, and beautiful, and it wants you to be happy. And if the people trying to market it had realized it was a girl-friendly fairytale with the same appeal as cult classics like Flash Gordon, Labyrinth, and Barbarella, then perhaps they would have made some real money. 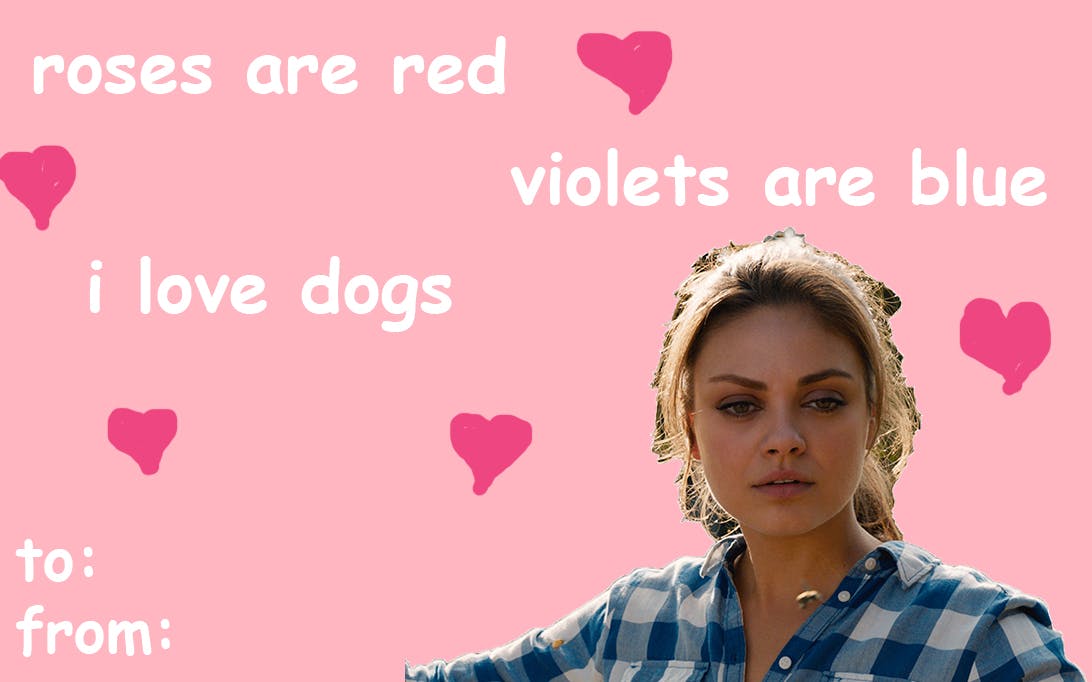 The reaction of “is this how straight dudes feel all the time?” is pretty common among fans of Jupiter Ascending. With its everywoman heroine, nonsense dialogue (“Bees sense royalty,” Sean Bean solemnly explains, as a swarm of bees recognizes Mila Kunis as the genetic reincarnation of an alien queen), and neon-tinted action sequences, it’s basically a 13-year-old girl’s melodramatic anime fanfic writ large.

Just to be clear, this is the precise gender-flipped equivalent of all those movies where some weak-chinned rando turns out to be the Chosen One, defeats a supervillain despite having no real personality or skills, and gets rewarded with a kiss from Megan Fox (or in the case of Wanted, Angelina Jolie). Jupiter Ascending is no worse, or more absurd, than any other sci-fi blockbuster of its type. The plot may be muddled and some of the dialogue clunky, but you could say the same of Star Wars—or Guardians of the Galaxy, which has a Rotten Tomatoes review score of 91 percent. (Jupiter scores 22 percent, which seems kind of egregious by comparison.) 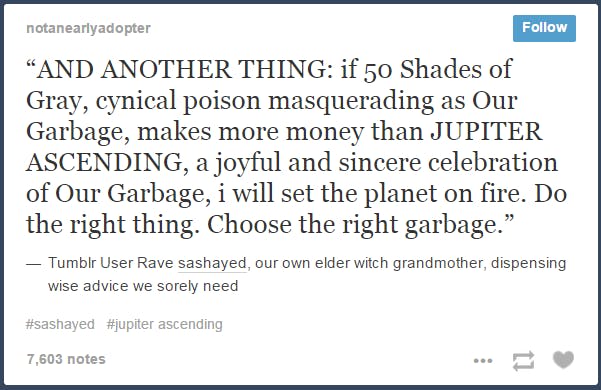 Every year, we are offered a whole host of big-budget movies that cater directly to the teen boy id. These movies usually focus on a dorky everyman hero or a super-powered badass and rely on a combination of high production values and A-list stars to support a dodgy screenplay. No matter whether their reviews are mediocre (Transformers) or excellent (Guardians of the Galaxy), they make a ton of money and are widely described as “fun,” even by critics who don’t think they’re very good. 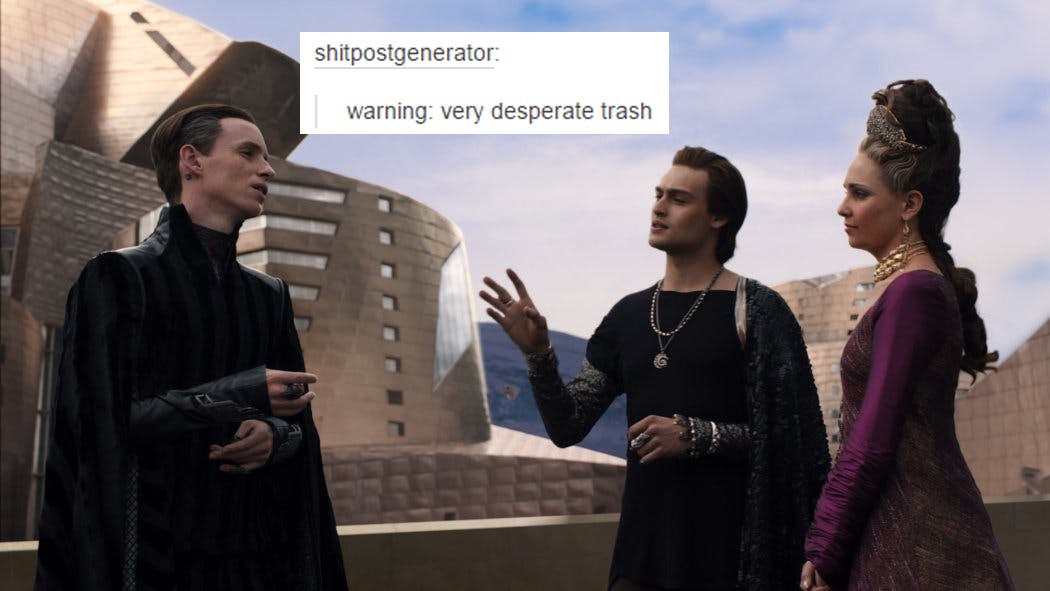 Jupiter Ascending is far from a masterpiece, but it fills a niche that many critics (and filmmakers) don’t seem to realize even exists: the desire for a fun, frothy Guardians of the Galaxy-style movie that doesn’t include sexist jokes or a male protagonist. It’s a wish-fulfillment fantasy that falls somewhere between The Princess Diaries and Star Wars, except with more speaking roles for women than any sci-fi blockbuster in recent memory. And yet it’s already been consigned to the garbage heap of Hollywood flops, rather than where it really belongs: the garbage heap of our hearts.