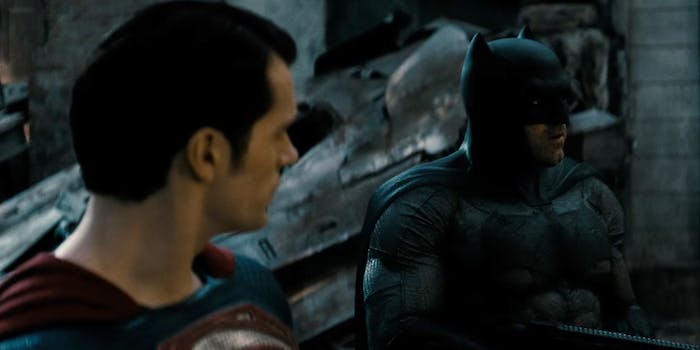 The reviews are out and the conspiracy looms.

Warning: This article quotes and references reviews of Batman v Superman: Dawn of Justice but is otherwise spoiler-free.

The reviews are in for Batman v Superman: Dawn of Justice, and they’re… not great. But if you ask some fans of the Dark Knight and the Man of Steel, it’s not because the movie is actually terrible.

Those reviews, which went up Tuesday evening after the embargo lifted, do cover some of the positives: a strong beginning, the introduction of Wonder Woman, and aspects of Jesse Eisenberg’s performance. But overall the film was panned with critics calling it “a messy spectacle,”  “a film so bad it wears you down and makes you wonder if there was ever such a thing as a hero anyway,” “incoherently structured,” and “even Wonder Woman can’t save this unholy mess.”

Currently, Batman v Superman has a 41 percent rating over at Rotten Tomatoes, which is an even lower score than Man of Steel, a movie that director Zack Snyder is still defending three years later.

Batman v Superman will likely be a massive box office hit no matter what critics say. It’s already made between $20-25 million in advance ticket sales with experts predicting that it may make up to $140 million in its opening weekend. And for many, the reviews have been amusing to read.

But that hasn’t stopped some Batman, Superman, and DC Comics fans from claiming that Disney and Marvel are paying film critics to post bad reviews to ruin Batman v Superman’s success.

The idea of film critics being paid for reviews by movie studios was floated earlier this year by screenwriter Max Landis (Chronicle, Victor Frankenstein), who has received some negative film reviews during his career. He later retracted it once critics denied it and asked him for names. Even Roger Ebert has debunked the idea that critics are paid for reviews in a 1994 review.

But that doesn’t seem to be evidence enough for some Batman v Superman fans.

All you Disney puppets who conspired against BvS Wil get what's coming to you!

The conspiracy theorists have in turn triggered a wave of people making fun of their suspicion that the negative Batman vs Superman reviews were orchestrated by Disney.

I like how even though early reviews are positive, there's conspiracy theories for why critics will dislike Batman vs. Superman.

people seem very convinced that there is some kind of conspiracy behind the poor reviews of #BvS and honestly, why.

Movie critics don't like a movie – well, it's a conspiracy!

Yeah, I'm sure that's it, fanboys.

Screen Rant also quashed the idea that critics are being paid, saying that if someone had it would’ve gotten out by now.

“There’s simply no evidence to support it—not even the ‘jet fuel can’t melt steel beams’ class of evidence associated with other conspiracy theories,” H. Shaw-Williams wrote. “There are occasional claims along the same lines as Landis’—supposed hearsay conveniently devoid of any specifics—but if this were really happening then you would think that at least one person among a group of professionals who are perpetually hungry for a scandal would have heard about it and published the details.”

While most people may believe the Disney conspiracy is bollocks, there is a stronger consensus that even if critics aren’t taking money for reviews, there is a Marvel bias among some critics, or at the very least an anti-DC Comics bias.

The Critics Are In Disney's Pockets conspiracy is absurd, but it does seem like some of you are going out of your way to bash the thing

If you're angry about critic reviews, be angry that critics can't see past the marvel formula. Don't create conspiracy theories

@rron007 I tend to not believe the whole "Disney pays critics" bs, but stop acting like there isn't any bias when crap like Thor 2 is at 66%

Ultimately, it won’t really matter what the critics think. They’ve said their piece, and nothing they say will deter fans from seeing or even enjoying the movie. Chances are, you might hate movies that critics adore and vice-versa, but a negative review doesn’t automatically equal a conspiracy. Soon enough, we’ll all be seeing it and opinions are sure to be all over the board.

Until then, we have the reviews.

Bad reviews of a movie don't matter.
All that matters is whether YOU like it.