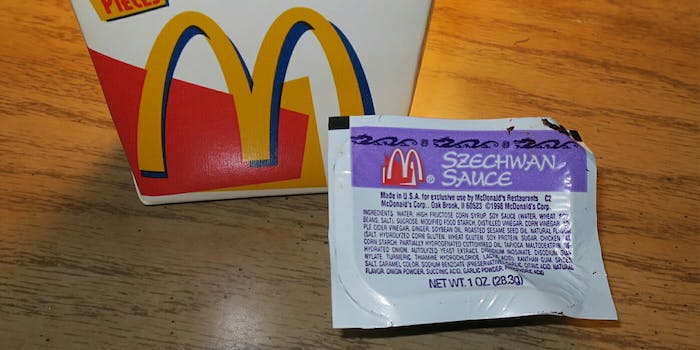 A few months ago McDonald’s promised to “open any portal necessary” to bring back enough Szechuan sauce to satisfy fans this winter after a disastrous limited promotion, and now it’s about to fulfill its end of the bargain.

McDonald’s employees already shared photos of shipments and their stores preparing for Szechuan sauce—a limited edition sauce from 1998 that had a pop culture resurgence thanks to Rick and Morty—earlier this week that told us the sauce would return soon. And McDonald’s is going all-out to reveal just when we’ll find that out with the launch of a new website that’s fittingly titled “We Want the Sauce.”

Launching Feb. 22, McDonald’s plans to answer the fundamental questions that fans will have. But it also wants to give customers and fans a behind-the-scenes glimpse under the wrapper of what happened during its special promotion back in October in a three-part podcast series called The Sauce.

“We know there were many unanswered questions and even more unbelievable stories from last year’s Szechuan saga,” McDonald’s said on its website.

McDonald’s isn’t giving clues about when Szechuan sauce will return for real, but employees are posting instructions given to their restaurants as well as what the sauce will look like. If those are any indication, we may be able to get our hands on Szechuan sauce by next week.

GUYS. THIS IS FROM MY FRIEND'S MCDONALDS. SZECHUAN SAUCE DATE IS CONFIRMED. RT THIS AND SPREAD THE WORD #mcdonalds #szechuansauce #RickandMorty pic.twitter.com/wOkdkkqZMp

Rick and Morty’s inclusion of Szechuan sauce—by making it Rick Sanchez’s series arc, only to never mention it again—led to a newfound fervor for the sauce. After McDonald’s brought it back for the show’s creators and a handful of fans, it eventually gave fans the chance to try it for themselves. However, the promotion resulted in mass shortages and confusion, anger, riots, and a spotlight on the toxic parts of Rick and Morty fandom before McDonald’s promised to bring it back. By the time it arrives in restaurants, it will have been nearly a year since Rick first went into the depths of his mind to get that sauce again.

But if the photos shared online are any indication, McDonald’s made sure to grab more than enough packets through the portal this time around.