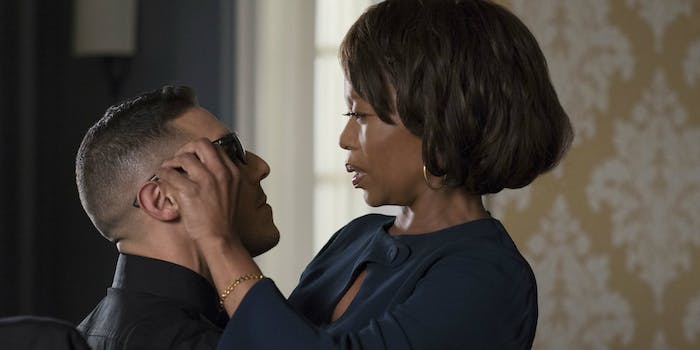 As superhero franchises go, the MCU scores a solid B- at romance. Its female love interests generally avoid sexist tropes (a low bar indeed), and there are some legit romantic storylines like Steve Rogers and Peggy Carter or Jane Foster and Thor.

But there’s a difference between “good by superhero franchise standards” and depicting a compelling relationship in its own right. With a few exceptions, like the 1978 Superman (which is essentially a romcom), superhero movies use romance as a shortcut to give the hero some emotional depth. They rarely reflect the complexity of long-running comic storylines like Batman and Catwoman’s impending nuptials. So if you ask Marvel fans which relationships they’re really invested in, they’re more likely to list non-canon pairings like Steve/Bucky (meaning Steve “Captain America” Rogers and James “Bucky” Barnes).

That finally changed in Luke Cage season 2, which features the MCU’s most interesting love story to date: Mariah Dillard and Hernan “Shades” Alvarez, aka #ShadyMariah.

To appreciate ShadyMariah, you first need to understand why so many superhero romances are forgettable. Basically, they often resort to Avril Lavigne logic: “He was a boy, she was a girl. Can I make it any more obvious?” The Avengers franchise already did this twice, first with Bruce Banner and Black Widow, and then with Vision and Scarlet Witch, a couple that originated in the comics but materialized out of nowhere in the movies. No chemistry, no build-up, nothing. TV allows for more long-form relationship stories than film, but until now, Marvel’s Netflix shows mostly focused their energy on friendships. For a traditional will-they/won’t-they romance, you’ll have to tune into five dubious seasons of Agents of S.H.I.E.L.D. for Fitz/Simmons (Leo Fitz and Jemma Simmons).

There’s a chasm of emotional difference between romance as a genre and the mediocre romantic subplots you often see from action/adventure writers in superhero media. The worst examples simply don’t bother to articulate why two characters should be together. Thinking back to the Dark Knight trilogy, did you really care about Bruce Wayne and Rachel Dawes? No. The story works best if we view Rachel as an unattainable symbol of a life that Bruce left behind—not as a compelling romantic partner. When Bruce finally elopes with Catwoman, it’s implausible to the point of total nonsense. The creators of the Dark Knight trilogy just didn’t understand romance, and they couldn’t create a three-dimensional female lead.

This obviously isn’t a problem for Luke Cage. The show is full of interesting women, and with Shades and Mariah, we get a love story that evolves into a morally complex thriller. Their relationship works because Luke Cage’s creators thought deeply about the characters’ motives, background, and sexuality. It’s the first time I’ve seen a canon MCU romance with the same emotional depth as fanfiction, and believe me when I say that Marvel fanfic writers know what’s up.

EVERYTHING WE KNOW ABOUT:

In some ways, it helps that Shades and Mariah are an unusual couple. Older Black women are seldom cast as romantic leads, and we rarely see women in their 60s paired with much younger men. This means the show must work harder to sell their relationship, instead of relying on automatic expectations. In the season 1 finale, their first kiss is a meeting between two ambitious criminals who believe they’ve met their match. From then on, their relationship is sexy but fraught with tension, clashing over their divergent views of leadership and loyalty.

In my season 2 review, I described Shades and Mariah as a love story between a queen and her knight. That’s a rose-tinted view. The reality is that they drive each other to self-destruction. Introduced as a serial right-hand man, Shades wants a master who deserves his loyalty. After Cottonmouth and Diamondback both fail him, he aligns on Mariah as a worthy replacement: a naturally ruthless politician who just needs to learn the ropes of organized crime. He’s right. The problem is, he’s too right.

Rather than honoring the status quo as Harlem’s new crime boss, Mariah rises to bloodthirsty heights of violence and cruelty. Her two-season arc charts a Shakespearean rise and fall, shaped by a traumatic childhood and spurred on by ambition. Unlike the tightly controlled Wilson Fisk in Daredevil, she’s greedy and chaotic. Her only intimate relationships are with her family and Shades, and by the end of season 2, she’s killed or alienated them all.

Over the course of their relationship, Shades and Mariah effectively swap places. Shades begins in a position of strength, guiding Mariah through her early days as a gangster. He also provides emotional support during a time of personal upheaval. At first you wonder if he’s just using her, manipulating her to solidify his place beside the throne. (In fact, his friend Comanche insinuates that Mariah is a cougar and Shades must have an ulterior motive, a view that seems like pure sexism until we realize it’s actually jealousy. He and Shades used to be lovers, and Mariah has taken Comanche’s place.) Once Mariah finds her place in the criminal underworld, she begins to ignore Shades’ advice and make increasingly extreme choices. This lack of restraint is a kind of power in itself because it leaves Shades emotionally vulnerable. He went into their partnership with an expectation of trust and equality, while she almost views him as an underling.

The breaking point comes when Shades learns that Comanche is a police informant and kills him. Shades murders his closest friend to keep Mariah’s dream alive—and gets nothing in return. Within a few episodes, Mariah is blindly obsessed with seeking revenge against Bushmaster, kicking off a series of events that ends with Mariah dead and Shades in jail. In a post-season interview, actor Theo Rossi described Comanche as the love of Shades’ life, and he may be right. Comanche actually loved Shades for who he was, whereas Mariah loved him at his worst, inasmuch as she loved anyone at all.

Each corner of this triangle was brought down by their own expectations: Comanche was hung up on Shades, Shades thought he could build a new life with Mariah as his partner, and Mariah believed that Shades could be her lover and her attack dog at the same time. It’s a tragedy with deep roots in each character’s childhood and personal values, with fantastic performances from the leads. After all, you can’t have a decent romance without a leading man who can really smolder.