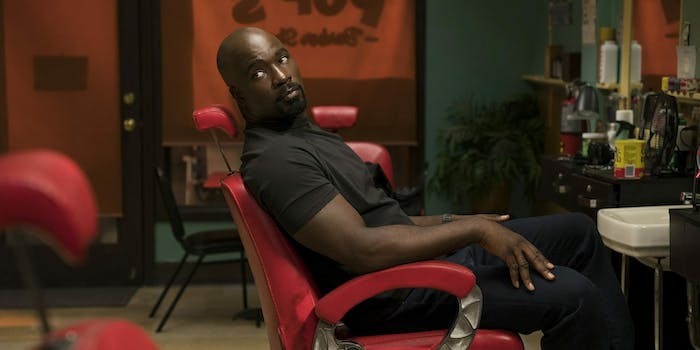 Luke Cage is back and better than ever!

This review includes no major spoilers for Luke Cage season 2.

Post-Defenders, Luke Cage (Mike Colter) is riding high: exonerated, living with Claire Temple (Rosario Dawson), and settling into his role as a local celebrity. Detective Misty Knight is faring less well after losing an arm, working a desk job while a gang war brews on the streets.

The biggest flaw in Luke Cage‘s first season was its supervillain switcheroo, killing off Mahershala Ali’s wonderful Cottonmouth Stokes and replacing him with… some guy in a super-suit. It was a disappointing twist because, while Luke’s powers are important, a TV show isn’t a boxing match. For a compelling story, the hero must face off against a structural power that can’t be defeated with a single punch.

Season 2 solves this problem by giving us a duo of conflicting villains. Bushmaster (Mustafa Shakir) is the new Big Bad, a Jamaican gangster with a simple motive: kill Mariah Dillard (Alfre Woodard) and take over her operation. Armed with flashy martial arts and an herb that makes him almost indestructible, he’s someone Luke can fight face-to-face. Mariah—one of my favorite characters last season—is a more sympathetic villain like Daredevil’s Wilson Fisk. She’s a complicated person with similarly complicated relationships, most importantly her daughter Tilda (Gabrielle Dennis) and her partner Shades (Theo Rossi).

Shades is a shrewd operator with a razor-sharp haircut and the ability to generate sexual tension from thin air. Season 1 set him up as a ruthlessly competent fixer, searching for a master worthy of his skills. It’s an interesting role in a gangster story, where most people are either hired goons or ambitious cronies hoping to usurp the boss. But Shades knows what he wants, and he thinks he’s found it in Mariah.

Their relationship is intense and troubled, not to mention unusual for TV: a hot, confident guy who is openly attracted to power dating a volatile woman 20 years his senior. At first you wonder if he actually loves her, or if he’s just using her for his career. Then you realize that for both characters, these two motives overlap: They both want a trustworthy partner, and while Mariah uses Shades for his criminal expertise, Shades believes he can mold Mariah into the perfect boss. In romance novel terms, he’s the loyal knight to her queen.

The trick to a good supervillain is to make them either relatable or exciting to watch. (Amazingly, a lot of superhero movies fail to remember this.) Mariah is both, with an arc that feels like a response to the “strong female character” debate. Many feminist critics are underwhelmed by this term, because “strong” doesn’t always equate to complex or well-written. That’s an especially relevant point in superhero media, where creators often worry that vulnerability will seem like anti-feminist weakness.

The writers and directors behind Luke Cage—a diverse and more gender-balanced team this season—had no such compunctions with Mariah. Basically, she’s messy. After her rapid shift from local politics to organized crime, she’s drinking heavily and taking financial risks. Shades spends a lot of time managing her outbursts—something that I suspect will be controversial but is actually a familiar scenario for male villains too. The tension may come from our own expectations for a woman like Mariah: a stylish politician who delivers well-crafted speeches and wants to empower Black women. There’s a desire to buy into this image, even as we see the cruelty and instability beneath it. It’s hard to believe that Alfre Woodard’s unpredictable, stress-inducing performance exists in the same continuum as Iron Fist and Punisher. In a franchise beset by slow-moving crime plots and skippable exposition, Woodard forces you to pay attention.

Superhero stories are a useful way to explore the relationship between emotion and moral choice. We might think of anger as an inherently negative emotion, but a hero uses righteous anger to battle injustice. On the flip side, villains become overpowered by their rage and ambition. This is the key to Luke’s arc in season 2, as he struggles with his identity as a superhero. Unlike Daredevil, Luke Cage acknowledges the impact of race and gender on its hero’s moral choices. Luke’s heroism is shaped by his idea of masculinity, and by how society treats him as a Black man.

This comes to the foreground during an argument with Claire, who thinks Luke is becoming too violent. His initial response is kneejerk sexism, accusing Claire of trying to “castrate” him. Then he points out that as a Black man, people will always stereotype him as the aggressor. Why not lean into the stereotype? But while Claire supports using strategic force in the name of justice, she doesn’t want to live with a man of violent character. Luke must examine his own values and decide where to draw the line. On a less deadly level, that includes choosing the right endorsement deals as a public figure.

This theme of public perception pervades the whole show. In the same way that Jessica Jones explored paranoia and the male gaze through a sense of constant surveillance, Luke Cage’s characters are relentlessly image-conscious. They have multilayered identities. In public, Luke is viewed through cellphone cameras as a celebrity, an image over which he has little control. Then there’s his inner self: a troubled man who tries to do the right thing. And finally, there’s the constant awareness that some people will dismiss this complexity in favor of making racist assumptions. Luke is always cognizant of this balancing act, but he’s nowhere near as controlling as Mariah, a master of PR. While being truly despicable behind the scenes, she’s built an aspirational image as a businesswoman who gives back to the community.

After faltering last season, Mariah wants to bolster her reputation by marketing herself as a mom, handwaving the years of conflict with her daughter. She’s also trying to cement a secondary image as a fearsome mob boss, and in her private moments, she’s explosive and emotionally raw. All three of these identities share the same foundation: Mariah’s grandmother Mabel Stokes, an infamous brothel madam who is both Mariah’s role model and a source of family trauma.

Luke just wants people to recognize him as a good man. Mariah wants to look like Michelle Obama while beheading her enemies on the side.

Marvel needs to shake up the formula

You’ll notice I’ve written a lot about character and themes, but not much about the plot. That’s because Luke Cage’s crime storytelling just isn’t very interesting. This is less of an issue if you only watch one or two Marvel/Netflix series, but if you’re a completist—in other words, a Marvel fan, a TV critic, or a Netflix addict—then you’ll find some elements repetitive.

Nine seasons in, it’s impossible to miss the similarities between spinoffs. Each season is a couple of episodes too long. Every show takes a while to get going, with Luke Cage’s second season hitting its stride around episode 5. Characters often investigate mysteries where the resolution is either obvious or dull. The detective work rarely measures up to other season-long crime dramas because we’re not here for a police procedural—we’re here for the superheroism. Misty Knight may be charming when she’s hanging out with Colleen Wing or taking guys out with her robot arm, but my brain goes into screensaver mode when she starts talking about arrest warrants. On the plus side, Luke Cage actually managed to make Iron Fist bearable, using him as a naively goofy rich boy opposite Luke’s effortless cool.

Even still, while Luke Cage thrives when telling stories about justice and morality, it isn’t especially good at being a cop show. This may be one of Marvel’s strongest seasons to date, but the Defenders franchise needs to shake off the formula and move onto something fresh.