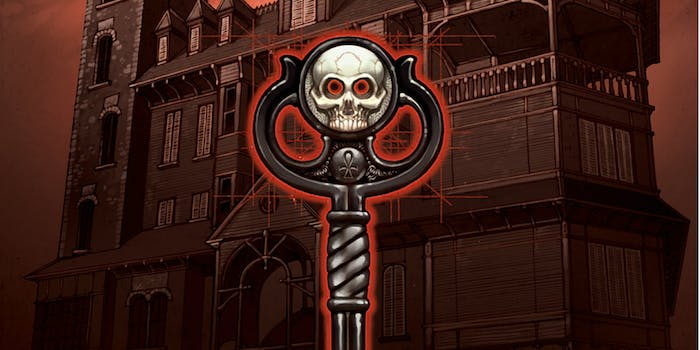 Netflix is finally making a ‘Locke & Key’ series a reality

After 8 years and being scaped by Hulu, it's on its way.

Netflix has given a 10-episode series order to Locke & Key with plans to redevelop and recast the project just months after Hulu passed on the series.

Carlton Cuse (Lost, Colony)—who was attached to the Hulu iteration of Locke & Key, based on the IDW comic by Joe Hill and Gabriel Rodríguez—will be on hand as a showrunner along with Meredith Averill (The Good Wife).

Although some of the creative team has stayed on as Locke & Key changed networks, Netflix is scrapping Hulu’s pilot script, which will now be written by Hill and Aron Eli Coleite. The pilot will also need a new director now that the director of Hulu’s version of the first episode, Andy Muschietti (It), is preoccupied with the It sequel.

The official synopsis from Netflix hints at the supernatural elements that will be a big part of the series.

Locke & Key, written by Joe Hill, is a horror/fantasy series that revolves around three siblings who, after the gruesome murder of their father, move to their ancestral home in Massachusetts only to find the house has magical keys that give them a vast array of powers and abilities. Little do they know, a devious demon also wants the keys, and will stop at nothing to attain them.

Rodríguez celebrated the news on Twitter, thanking Cuse and IDW for finally making the series happen.

thanks to everyone for all your good wishes and good vibes regarding the #LOCKE&Key on #Netflix news. We hope it'll be fun.

Thanks and congratulations to the hard work of @IDWEntertain @davidozer @CarltonCuse and #JoeHill that fought hard to make this finally happen :)

The pickup from Netflix marks an eight-year journey to bring Locke & Key to television. It started out as a pilot on Fox in 2011 starring Sarah Bolger, Jesse McCartney, and Mark Pellegrino, but Fox didn’t select the project to bring it to series; several attempts to sell the show to another network fell through. A new version of a Locke & Key pilot was ordered at Hulu in 2017 with Cuse and Scott Derrickson (Doctor Strange)—who was replaced by Muschietti—attached before Hulu ultimately declined to give it a series order.

With the series order from Netflix, it’s the closest that the years-in-the-making adaptation has gotten to airing. With no director for the pilot and without a cast attached (with the exception, according to Deadline, of It’s Jackson Robert Scott), it’s unclear when the series is planning to drop on Netflix.