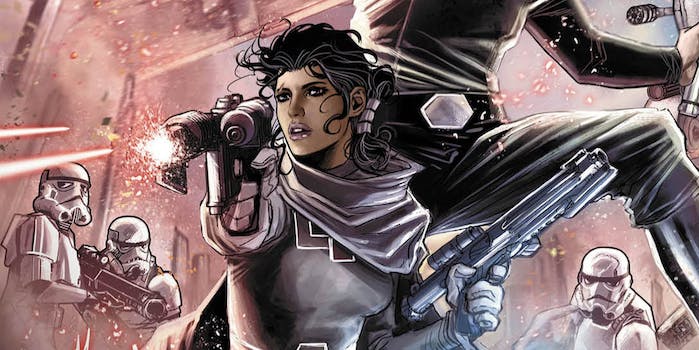 Everyone's favorite new X-wing pilot had an awesome role model: his mom, a hero of the Rebel Alliance.

In all these regards, he takes after his mother.

Rebel pilot Shara Bey joined the Star Wars canon as the main character in the four-part Marvel comic series Shattered Empire. Her story begins at the Battle of Endor, the climactic confrontation in Return of the Jedi.

Shattered Empire, written by Greg Rucka and drawn by Marco Checchetto, sets the scene following the death of Emperor Palpatine. Despite the Rebel Alliance’s victory at Endor, they still had to deal with the rest of the Imperial fleet—and for Shara Bey, that meant going on secret missions with Princess Leia and Luke Skywalker.

Poe Dameron was already a few years old during the events of Shattered Empire, living with his grandfather while Shara and her husband Kes Dameron fought for the Rebel Alliance. This forced both parents to make a difficult choice: keep fighting the remaining Imperial forces or build a home together like they had always dreamed? 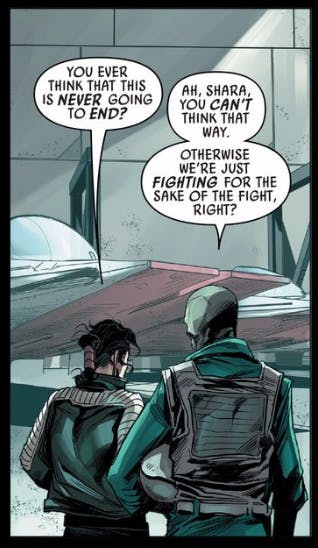 After a few months of post-Endor missions, Bey and Dameron decided to raise their son on Yavin 4, the planet where the rebels hid in A New Hope. This decision may well have been inspired by Oscar Isaac’s Guatemalan background; the Yavin 4 scenes in A New Hope were filmed in Guatemala.

Like Kylo Ren, Captain Phasma, and General Hux, Poe Dameron belongs to a generation born within a few years of Palpatine’s dramatic defeat at Endor. In fact, he has a surprising amount in common with Kylo Ren, aka Ben Solo. Both men were raised by war heroes, and both decided to follow in the footsteps of their relatives—an ongoing theme in the cyclical narrative of Star Wars. Poe even inherited his mother’s loyalty to Leia—and her love of wearing her flight jacket all the time.

The main difference between Poe and the young Ben Solo is that while Ben became obsessed with his grandfather’s terrifying legacy, Poe never felt overshadowed by his family. He didn’t know the extent of his mother’s heroism until he read her military records as an adult, and his childhood on Yavin 4 sounds relatively peaceful and normal. His family put down roots in a very literal sense, with Shara Bey planting a Force-sensitive tree that she rescued during a mission with Luke Skywalker—one of two surviving twigs from the tree that grew in the Jedi Temple on Coruscant.

Shara died when Poe was eight years old, but by then she had already begun teaching him to fly. Greg Rucka’s prequel book Before the Awakening reflects on Poe’s childhood on Yavin 4, where Shara would let him sit on her lap while she flew her old Rebel Alliance A-wing.

While many fictional heroes seem to originate as fully formed adults, parentage looms large in Star Wars. The galaxy bends to the will of the Skywalker family saga, and the story is littered with characters who were taken from their parents at a young age—most notably the First Order’s stormtrooper army and the Jedi trainees of the prequel trilogy. So while Rey and Finn’s mysterious origins will fuel years of speculation, Poe’s background as a loyal son of the Rebellion is equally important.