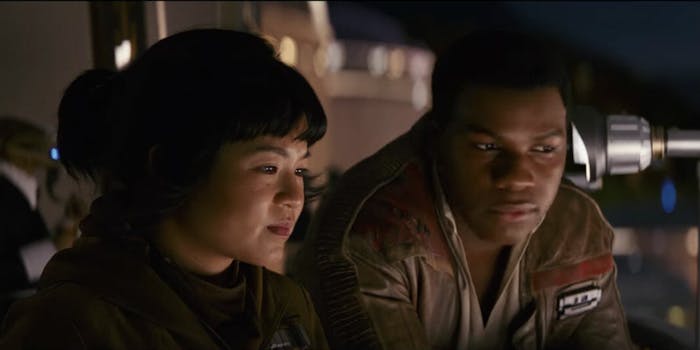 From Finn/Poe and Reylo to the new pairings of 'The Last Jedi.'

Star Wars is and always has been a goldmine for shipping. It features a perfect balance of interesting characters and long gaps between movies, allowing plenty of time for speculation. Since there’s only one canonical love story per film (if that), fans also have a lot of room to explore other pairings.

After The Force Awakens, fans immediately latched onto Resistance fighters Poe and Finn’s love-at-first-sight romance, the intense vibe between heroine Rey and villain Kylo Ren. The new Star Wars movie The Last Jedi gave us a lot more to work with, and unlike certain sequels (Avengers: Age of Ultron, we’re looking at you) it didn’t try to stomp on anyone’s OTP (One True Pairing for the uninitiated). Based on what we just saw, here’s how the main ships stand:

Finn/Rose is the only canon romance in The Last Jedi, and it’s pretty low-key. Resistance engineer Rose Tico is starstruck when she meets Finn, and while they get off on the wrong foot, they’re a perfect match. Both characters illustrate how anyone can make a difference in the war, proving that you don’t need Force powers or political clout to become a hero.

They wind up sharing one of the most powerful moments in the movie: when Rose saves Finn from a suicide mission and points out that sometimes, protecting the people you love is more important than being a heroic warrior. It may be the starting point for the big love story of the sequel trilogy, marking a change after the melodrama of Anakin/Padme, and the sexual tension between Han and Leia. Rose and Finn are both wholeheartedly sweet and a little dorky, balancing out the darker elements of the setting.

Leia/Amilyn Holdo is the obvious frontrunner for a new fanfic ship coming out of The Last Jedi. One of the tie-in novels already hinted that Amilyn Holdo (played by actress Laura Dern) isn’t straight, although she’s speaking more in terms of interspecies relationships than gender. Leia says in the same conversation that she’s only attracted to human men, but whatever. We can already sense the potential for this ship, both in The Last Jedi and in the mostly-unseen backstory these two characters share. Holdo and Leia have known each other for years, and their heartfelt hand-clasp in the film proves that their relationship was more than just professional.

Finn/Poe (aka “Stormpilot”) is the most widely discussed ship in terms of mainstream media attention, with Poe at the center of a campaign for queer representation in Star Wars. Unsurprisingly, Disney didn’t opt for the ideal scenario here; however, the film doesn’t go out of its way to ruin shippers’ dreams either. Finn and Poe get a whole subplot together and are still the best of friends. And while you do have to contend with that Finn/Rose kiss, there’s room to maneuver by assuming it was one-sided. (Sorry, Rose!)

#StarWars paraphernalia seems to be going out of its way to give Poe Dameron a romantic prop that awaits a gender-unspecified recipient… pic.twitter.com/CV9aIWxtCJ

Disney has avoided making any specific statement about Poe’s sexuality, which is the second-best option if they’re not going to make him canonically queer. This way they can avoid backlash by keeping things ambiguous—much like how Mark Hamill encourages fans to interpret Luke Skywalker’s sexuality however they wish. In the meantime, there are some intriguing details in The Last Jedi‘s tie-in materials. The Visual Dictionary—a compendium of detailed illustrations of costumes, props, and set pieces from the film—tells us about Poe’s ring necklace, and apparently, he sewed his/Finn’s jacket back together while Finn was in that medical coma.

Reylo got a lot of screentime in The Last Jedi. It’s also the film’s most controversial ship because, while it’s overwhelmingly popular, many fans argue that a canonical Rey/Kylo Ren romance would send uncomfortable messages about abusive behavior.

Oddly enough, The Last Jedi gave us the best of both worlds for Reylo fans and haters. Rey and Kylo Ren got an emotionally intense storyline together, including open-to-interpretation moments like Adam Driver’s shirtless scene, and the moment where they touch hands through their psychic bond. Many fans are choosing to interpret this as the first act of a love story, suggesting that Kylo Ren can still be redeemed in Episode IX. At the same time, other fans can easily read their relationship in the opposite direction—which, let’s face it, is how director Rian Johnson probably intended things to go. Kylo Ren ends the film as the dictator of an evil empire, and although he’s still obsessed with Rey, she explicitly rejected him. These radically different interpretations will lead to a lot of arguments about how the story will conclude in Episode IX, but in terms of fanfic inspiration, The Last Jedi was a gift-wrapped package of emotional conflict for Reylo fans.

Finn/Rey is in a similar situation to Finn/Poe. They’re still one of the central relationships of the trilogy, and while the movies may aim for a sibling vibe, Finn and Rey definitely love each other. When Finn wakes up from his coma, Rey is the first person he asks for. Then when Rey returns to the Resistance, she asks Chewie to pass on an important message to Finn—a message that we conveniently only hear in Wookiee, meaning it could be anything from “I love you,” to “Remember to keep your blaster clean.” The final scene could hint at a tiny bit of jealousy between Rey and Rose, but hopefully it won’t go in that direction for Episode IX. The last thing this franchise needs is a love triangle where women compete over a man. Either way, that’s irrelevant to the world of fanfic.

Hux/Kylo Ren will continue as one of the most popular ships in the sequel trilogy, regardless of what actually happens onscreen. Canonically speaking, they loathe each other. You can view that as sexual tension, but Kylo/Hux is also one of those pairings where fans take over and invent a mostly new relationship. If you’re familiar with Harry Potter fandom, you know the deal. Draco Malfoy was canonically a whiny teenage fascist, but he still inspired a ton of fanfic where he’s a stylish aristocratic antihero or an abuse survivor with an emotionally intense redemption arc. Hux/Kylo fic often has little to do with canon, but for those who take inspiration from the movies, The Last Jedi creates an interesting new starting point. With Snoke out of the picture, Hux and Kylo Ren now have to run an empire together with no one else in charge, forcing them to cooperate or fail.

Looking at this list, we’re curious to see what unexpected ships emerge over the coming weeks. X-Wing pilot Jessika Pava became a niche favorite after The Force Awakens, and The Last Jedi is sure to inspire some similar surprises.