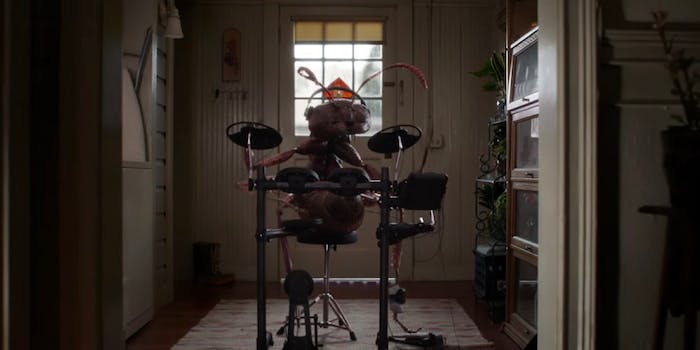 Warning: This article contains spoilers for Ant-Man and the Wasp.

We saw the ripple effect of Thanos’ Infinity Stone-powered snap at the end of Avengers: Infinity War affect humans and aliens alike, but they’re far from the only creatures who were turned to dust, according to Marvel Studios president Kevin Feige.

The possible discretion about just which creatures or species turned to dust burrowed into the post-Infinity War discussion after Ant-Man and the Wasp’s release. While the first post-credit scene showed us how Scott Lang became stranded in the Quantum Realm after Hank Pym, Hope van Dyne, and Janet van Dyne all turned to dust, the second was much shorter. As the camera pans through Scott’s abandoned house, the giant ant who filled in for the end of Scott’s house arrest was still there playing the drums. The clip, which we saw a manipulated version of in the trailer, is supposed to be light-hearted but comes with darker implications.

Were ants, like cockroaches in end-of-the-world scenarios, impervious to Thanos’ snap? Was that ant lucky enough to survive? And how does the physics of turning to dust work when you’re talking about animals?

So in a wide-ranging interview about Ant-Man and the Wasp and future Marvel Studios projects, Birth.Movies.Death. asked Feige about it.

If you somehow thought Thanos was right before—and he wasn’t—it’s even harder to justify it now. So yes, while that giant ant in Ant-Man and the Wasp, who probably has an ant-themed pun name from Scott Lang—survived, millions upon millions of his siblings did not. Neither did the rhinoceroses we see in Black Panther, animals in the air, ground, or sea, or all of the good pets in our lives. Yes, the possibility of surviving but seeing your dog or cat disintegrate before your eyes on top of your loved ones in the MCU is very real and terrifying.

So while going all-in on a mass subreddit snap ban is plenty of fun, the idea of losing half of everyone becomes infinitely less so once you apply it to the real world, ants and all.