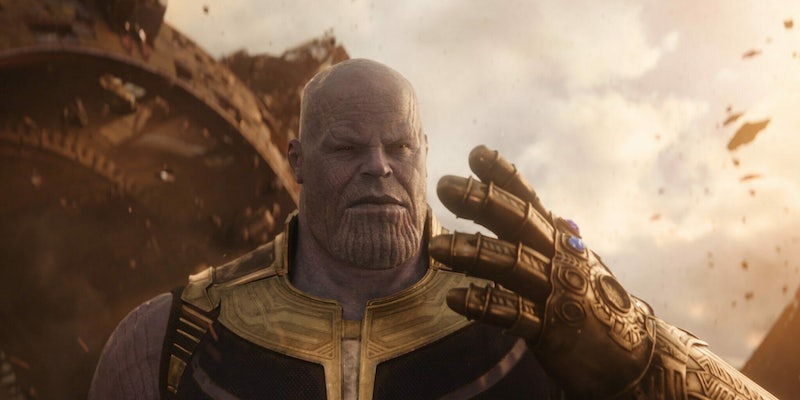 Stop trying to identify with a genocidal maniac.

Supervillains work better when they have meaningful motives, but as Hollywood embraces this idea, it’s had some unfortunate side-effects. These days whenever a villain has a sad backstory or a solid political goal, some genius will stroke their chin thoughtfully, log onto a social media platform, and type: “Hey, is it just me, or did Zorgon the Annihilator make some good points?”

After Avengers: Infinity War, this phenomenon is unfolding in explainer articles questioning whether Thanos was right. Before we go any further, I’ll clear that one up for you: He wasn’t. My favorite commentary on the issue may actually be this tweet from Atlantic writer David Sims. He points out that, narratively speaking, Thanos was doing us all a favor. But within the Marvel universe, Thanos is literally just a genocidal maniac.

The comics sometimes portray Thanos as a victim of unrequited love, but overall, his murderousness is an innate trait. He just loves to kill. The movie makes this clear from the get-go, but it adds a quasi-political motive to his killing spree. Convinced that the universe is overpopulated, he wants to use the Infinity Gauntlet to erase half of all sentient life.

Is overpopulation even a thing?

While Infinity War isn’t directly allegorical, Thanos reflects a real political viewpoint. If you don’t think about it too hard, it’s easy to blame economic inequality on an excess of people. We know that some countries are starving and running out of natural resources, and our planet’s population is growing. Ergo, the solution must be to have fewer people.

Of course, this immediately puts the onus on poorer countries with higher birth rates. By simplifying the world’s problems to overpopulation, you ignore the fact that wealthy people consume more resources and produce more waste. If Thanos genuinely wanted to help, he’d use the Infinity Gauntlet to redistribute wealth from all those resource-hogging tyrants like Loki and the Grandmaster. Hell, he could probably just create a bunch of habitable new planets. But he doesn’t do that, because he’s super evil.

Thanos’s unshakable self-belief is part of his charm. He doesn’t need experts to confirm his overpopulation theory; he just knows. However, that certainty doesn’t mean he’s right. Literally nicknamed the Mad Titan, he’s meant to be delusional.

We never see any real evidence of overpopulation. In fact, the one time Thanos illustrates his philosophy with a specific example, he’s clearly wrong. He argues that Gamora’s home planet flourished after he wiped out half their population, which is akin to saying he stimulated the local construction economy by razing a city to the ground. From the flashback scenes, we know that Gamora doesn’t see it that way. She was just a kid who lost her mother. The fact that they were poor is irrelevant.

Inasmuch as Infinity War is a political story at all, it actively argues against the idea that economic problems can be solved through an impersonal diagnosis of overpopulation.

As a rule, if you begin to identify with a supervillain, it’s time to re-examine your worldview. The same goes for everyone who decided the Empire were secretly the heroes of Star Wars. While the superhero genre includes a few villains with relatable motives, they usually illustrate how good intentions can go wrong. (For instance, Magneto responded to a lifetime of oppression by becoming a terrorist. Similarly, Black Panther‘s Killmonger tackled white supremacy by destabilizing Wakanda and trying to start World War III.) Villains like Thanos don’t even come close. Infinity War gave him a plausible ideology and a smattering of emotional depth, but that doesn’t actually mean you should sympathize.