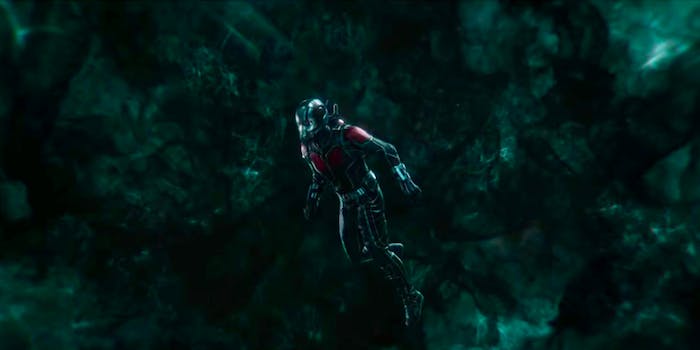 Let’s break down the Quantum Realm from ‘Ant-Man’

Warning: This article contains spoilers for Ant-Man and the Wasp.

Much of Ant-Man and the Wasp is on the smaller end of the Marvel Cinematic Universe, but it gave us our biggest look at its tiniest realm yet. We flirted with the Quantum Realm, but it’ll be helpful to understand what it is going forward.

What is the Quantum Realm?

Previously shown in Ant-Man and briefly glimpsed in Doctor Strange, Ant-Man and the Wasp tunneled head-first into the Quantum Realm, where Janet van Dyne had been trapped for the past 30 years. Hope van Dyne and Hank Pym spend most of Ant-Man and the Wasp attempting to finish a tunnel to take them into the Quantum Realm and rescue Janet, but at every turn, they’re faced with keeping their lab (and technology) out of the hands of Ghost, gangster Sonny Burch, and the FBI.

Once we’re in the Quantum Realm, the focus is centered more on the emotional reunion between Hank and Janet—and eventually Janet and Hope—more so than the Realm itself, which makes sense. That reunion grounds a cosmic realm that exists on a subatomic level. The rescue not only led to a reunion decades in the making but a happy ending for the Pym–van Dyne family. (Until, well, you know.)

But now that we’ve had a taste, not to mention that Scott Lang is stuck in the Quantum Realm until at least Captain Marvel’s release, we’ve got plenty of time to dive into the many, many layers of that universe, what it entails, and what it might mean for the Avengers moving forward.

The nature of the Quantum Realm—and why is the name different in the comics?

Unlike the Nine Realms in the universe that include Asgard (Thor’s home planet), Midgard (Earth), and Svartalfheim (home to the Dark Elf Malekith), the Quantum Realm exists in another reality altogether. It’s smaller than microscopic or atomic, and the further you venture into it the more you shrink.

Even after several decades of research from Hank, little is known about the Quantum Realm itself. Several decades before Ant-Man and the Wasp, Janet—the original Wasp—is sucked into the Quantum Realm after she shrinks down to an impossible size to defuse a nuclear weapon. Although she saved thousands of lives from an attack, she became stuck in the Quantum Realm. Hope and Hank are getting around that by building a tunnel that will allow a vehicle to travel within the Quantum Realm: the first one takes up an entire room in a lab, but a newer version is portable in the back of a van.

“It means that you would enter a reality where all concepts of time and space become irrelevant as you shrink for all eternity,” Hank Pym explained to Scott Lang in Ant-Man. “Everything you know and love, gone forever.”

That might be the case in some parts of the Quantum Realm. But Janet van Dyne did age during her decades in the Quantum Realm, according to Kevin Feige. That was at least partially by design for the emotional impact of Janet’s eventual reunions.

The Quantum Realm originates in the Marvel comics in Fantastic Four #16 (in which the original Ant-Man makes an appearance) as a microscopic world where Dr. Doom shrinks and sends the Fantastic Four. While it looked like a miniature world akin to our own back then, it has become more psychedelic recently. And it’s expansive, too, with worlds and planets like Homeworld, K’ai, Mita, and Tok contained within it.

The name, however, is a purely MCU invention. In the Marvel comics, the Quantum Realm is called the Microverse, but Marvel Studios cannot legally use the name because it’s attached to the Micronauts, whose movie rights are owned by Paramount.

What we can find in the Quantum Realm

Scott Lang’s time in the Quantum Realm in Ant-Man is brief, but while he’s in there we’re introduced to a number of layers. He speeds past atoms, mountains, cells, plus a few tardigrades. There’s even a section where Scott appears to fold in on himself.

Hank’s journey into the Quantum Realm plays out in a similar manner. Thanks to her connection with Scott, Janet is able to relay where Hank and Hope can find her. As Hank travels further into the Quantum Realm to reach the “Wastelands beyond the Void,” we can spot more of what those layers look like, not to mention the tardigrades that prove to be a nasty piece of work (no matter how cute they may be to us).

The Quantum Realm has undoubtedly changed Janet. She has a weapon by her side and contains pockets of quantum energy that she uses to help Ghost heal. It isn’t enough to be a permanent solution, however. This is why Scott Lang is sent back into the Quantum Realm during the mid-credits scene.

But those tardigrades aren’t the only thing that Scott is warned about. Janet also tells him to avoid the time vortex, and although we don’t learn more about those in the remaining minutes of Ant-Man and the Wasp, there’s enough weight put on it that it might just come into play later.

It’s no secret that the Quantum Realm will have a role to play in future movies; at the very least, Scott—as one of the few remaining superheroes left after Thanos’ snap—needs to join the fray. There’s a possibility that someone like Bill Foster, Ghost, or Luis might be able to help now that Hank, Hope, and Janet have all been turned to dust. But the Quantum Realm itself might be a factor in Scott’s escape.

A time vortex might provide Scott with a means of escape. He could end up in the past (such as the ’90s-set Captain Marvel) or future with enough knowledge of the Quantum Realm to give the Avengers the boost they need to reverse the devastation Thanos wrought. Or the connection might only give him the means to deliver a message to someone who might be able to help him escape from the Quantum Realm. (Maybe even someone like Hawkeye who’s been on the sidelines this entire time?)

Right now, the possibilities are endless, just like the Quantum Realm itself. But chances of it resurfacing are high. You don’t just re-introduce a new realm after snapping half the universe out of existence if you don’t plan to use it.